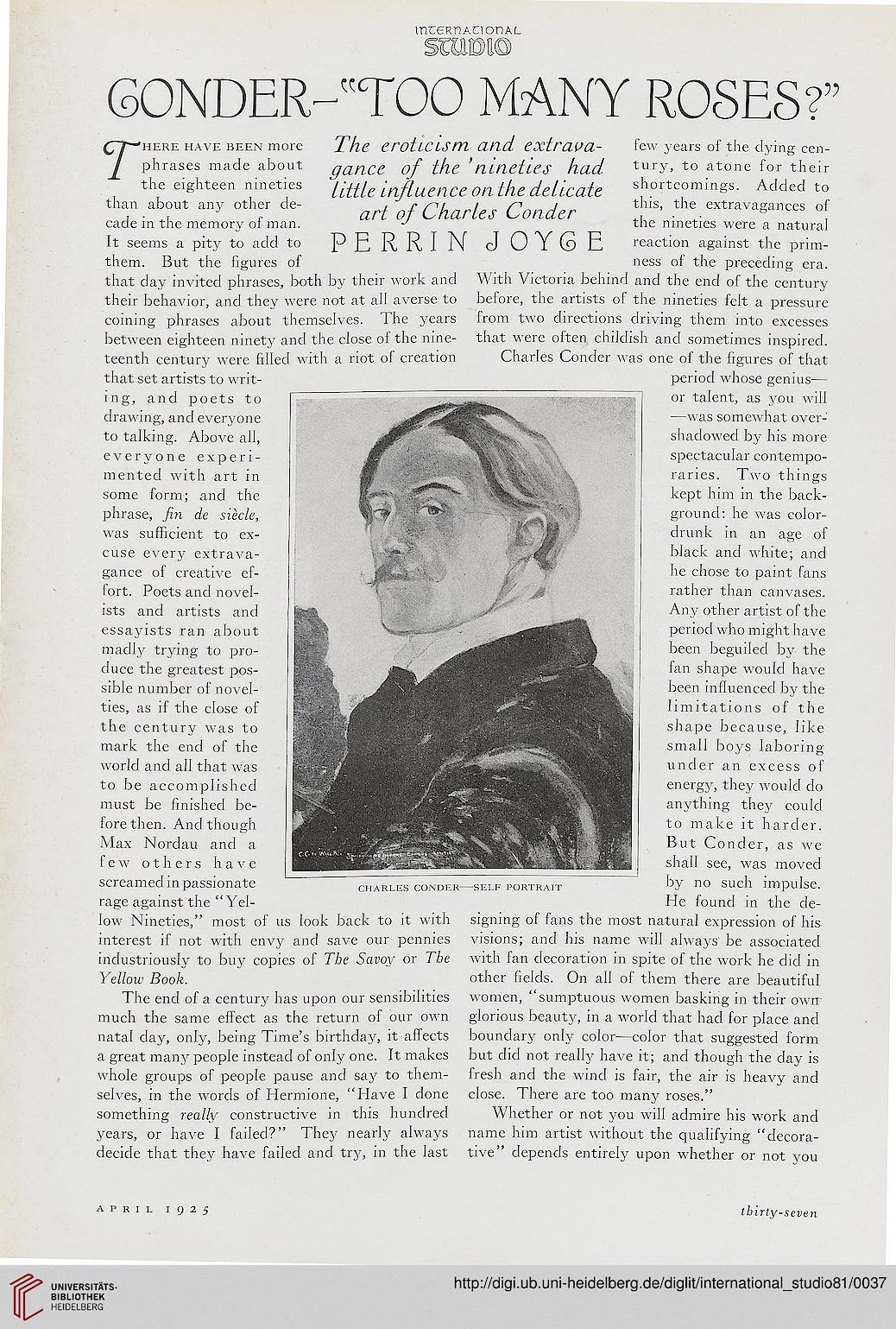 here have been more The erotiCLSm and extrava- few years of the dying cen-
phrases made about gance of the 'nineties had turY. t0 atone for their
the eighteen nineties Utile influence Onthe delicate shortcomings. Added to
than about any other de- f , £A / Qonder ^ the extrWnces of

cade in the memory of man. J the nineties were a natural

It seems a pity to add to P E R R I N J 0 Y Q) E reaction against the prim-
them. But the figures of ness of the preceding era.

that day invited phrases, both by their work and With Victoria behind and the end of the century
their behavior, and they were not at all averse to before, the artists of the nineties felt a pressure
coining phrases about themselves. The years from two directions driving them into excesses
between eighteen ninety and the close of the nine- that were olten childish and sometimes inspired,
teenth century were filled with a riot of creation Charles Concler was one of the figures of that

that set artists to writ-__period whose genius—

drawing, and everyone ^/^SSk ~was somewhat over"

to talking. Above all, Jt° ^Hbw ' shadowed by his more

cuse every extrava- 1 ^'W Wack and white; and

fort. Poets and novel- | iK, j> rather than canvases,

ists and artists and |gt _ Any other artist of the

essayists ran about iMt - *OSj?0fo. period who might have

madly trying to pro- fk been beguiled by the

duce the greatest pos- Jgfr, j/k fan shape would have

sible number of novel- jM bcen influenced by the

ties, as if the close of HL limitations of the

mark the end of the ■ I -sma11 boys laboring

world and all that"was SSjlUKfrl I under an excess of

fore then. And though 'jM to make it harder.

rage against the "Yel- He found in the de-

low Nineties," most of us look back to it with signing of fans the most natural expression of his
interest if not with envy and save our pennies visions; and his name will always be associated
industriously to buy copies of The Savoy or The with fan decoration in spite of the work he did in
Yellow Book. other fields. On all of them there arc beautiful

The end of a century has upon our sensibilities women, "sumptuous women basking in their owrr
much the same effect as the return of our own glorious beauty, in a world that had for place and
natal day, only, being Time's birthday, it affects boundary only color—color that suggested form
a great many people instead of only one. It makes but did not really have it; and though the day is
whole groups of people pause and say to them- fresh and the wind is fair, the air is heavy and
selves, in the words of Hermione, "Have I done close. There are too many roses."
something really constructive in this hundred Whether or not you will admire his work and
years, or have I failed?" They nearly always name him artist without the qualifying "decora-
decide that they have failed and try, in the last tive" depends entirely upon whether or not you