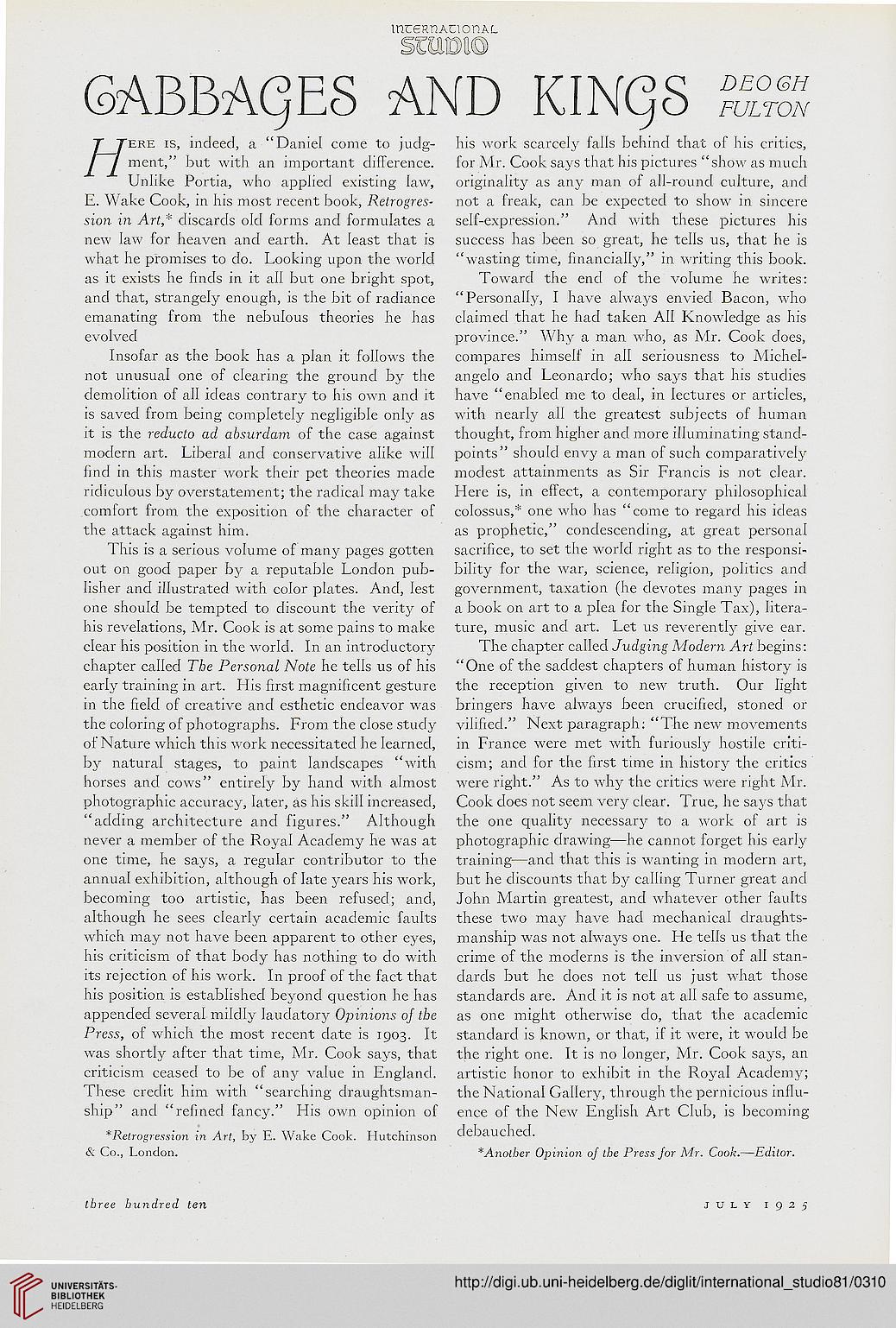 T Tere is, indeed, a "Daniel come to judg- his work scarcely falls behind that of his critics,
I 7 ment," but with an important difference. for Mr. Cook says that his pictures "show as much
Unlike Portia, who applied existing law, originality as any man of all-round culture, and
E. Wake Cook, in his most recent book, Retrogres- not a freak, can be expected to show in sincere
sion in Art,* discards old forms and formulates a self-expression." And with these pictures his
new law for heaven and earth. At least that is success has been so great, he tells us, that he is
what he promises to do. Looking upon the world "wasting time, financially," in writing this book,
as it exists he finds in it all but one bright spot, Toward the end of the volume he writes:
and that, strangely enough, is the bit of radiance "Personally, I have always envied Bacon, who
emanating from the nebulous theories he has claimed that he had taken All Knowledge as his
evolved province." Why a man who, as Mr. Cook does,
Insofar as the book has a plan it follows the compares himself in all seriousness to Michel-
not unusual one of clearing the ground by the angelo and Leonardo; who says that his studies
demolition of all ideas contrary to his own and it have "enabled me to deal, in lectures or articles,
is saved from being completely negligible only as with nearly all the greatest subjects of human
it is the reducto ad absurdam of the case against thought, from higher and more illuminating stand-
modern art. Liberal and conservative alike will points" should envy a man of such comparatively
find in this master work their pet theories made modest attainments as Sir Francis is not clear,
ridiculous by overstatement; the radical may take Here is, in effect, a contemporary philosophical
comfort from the exposition of the character of colossus,* one who has "come to regard his ideas
the attack against him. as prophetic," condescending, at great personal
This is a serious volume of many pages gotten sacrifice, to set the world right as to the responsi-
out on good paper by a reputable London pub- bility for the war, science, religion, politics and
Iisher and illustrated with color plates. And, lest government, taxation (he devotes many pages in
one should be tempted to discount the verity of a book on art to a plea for the Single Tax), litera-
his revelations, Mr. Cook is at some pains to make ture, music and art. Let us reverently give ear.
clear his position in the world. In an introductory The chapter called Judging Modern Art begins:
chapter called The Personal Note he tells us of his "One of the saddest chapters of human history is
early training in art. His first magnificent gesture the reception given to new truth. Our light
in the field of creative and esthetic endeavor was bringers have always been crucified, stoned or
the coloring of photographs. From the close study vilified." Next paragraph: "The new movements
of Nature which this work necessitated he learned, in France were met with furiously hostile criti-
by natural stages, to paint landscapes "with cism; and for the first time in history the critics
horses and cows" entirely by hand with almost were right." As to why the critics were right Mr.
photographic accuracy, later, as his skill increased, Cook does not seem very clear. True, he says that
"adding architecture and figures." Although the one quality necessary to a work of art is
never a member of the Royal Academy he was at photographic drawing—he cannot forget his early
one time, he says, a regular contributor to the training—and that this is wanting in modern art,
annual exhibition, although of late years his work, but he discounts that by calling Turner great and
becoming too artistic, has been refused; and, John Martin greatest, and whatever other faults
although he sees clearly certain academic faults these two may have had mechanical draughts-
which may not have been apparent to other eyes, manship was not always one. He tells us that the
his criticism of that body has nothing to do with crime of the moderns is the inversion of all stan-
its rejection of his work. In proof of the fact that dards but he does not tell us just what those
his position is established beyond question he has standards are. And it is not at all safe to assume,
appended several mildly laudatory Opinions oj the as one might otherwise do, that the academic
Press, of which the most recent date is 1903. It standard is known, or that, if it were, it would be
was shortly after that time, Mr. Cook says, that the right one. It is no longer, Mr. Cook says, an
criticism ceased to be of any value in England. artistic honor to exhibit in the Royal Academy;
These credit him with "searching draughtsman- the National Gallery, through the pernicious influ-
ship" and "refined fancy." His own opinion of encc of the New English Art Club, is becoming

* Retrogression in Art, by E. Wake Cook. Hutchinson debauched.
& Co., London. *Another Opinion of the Press for Mr. Cook.—Editor.