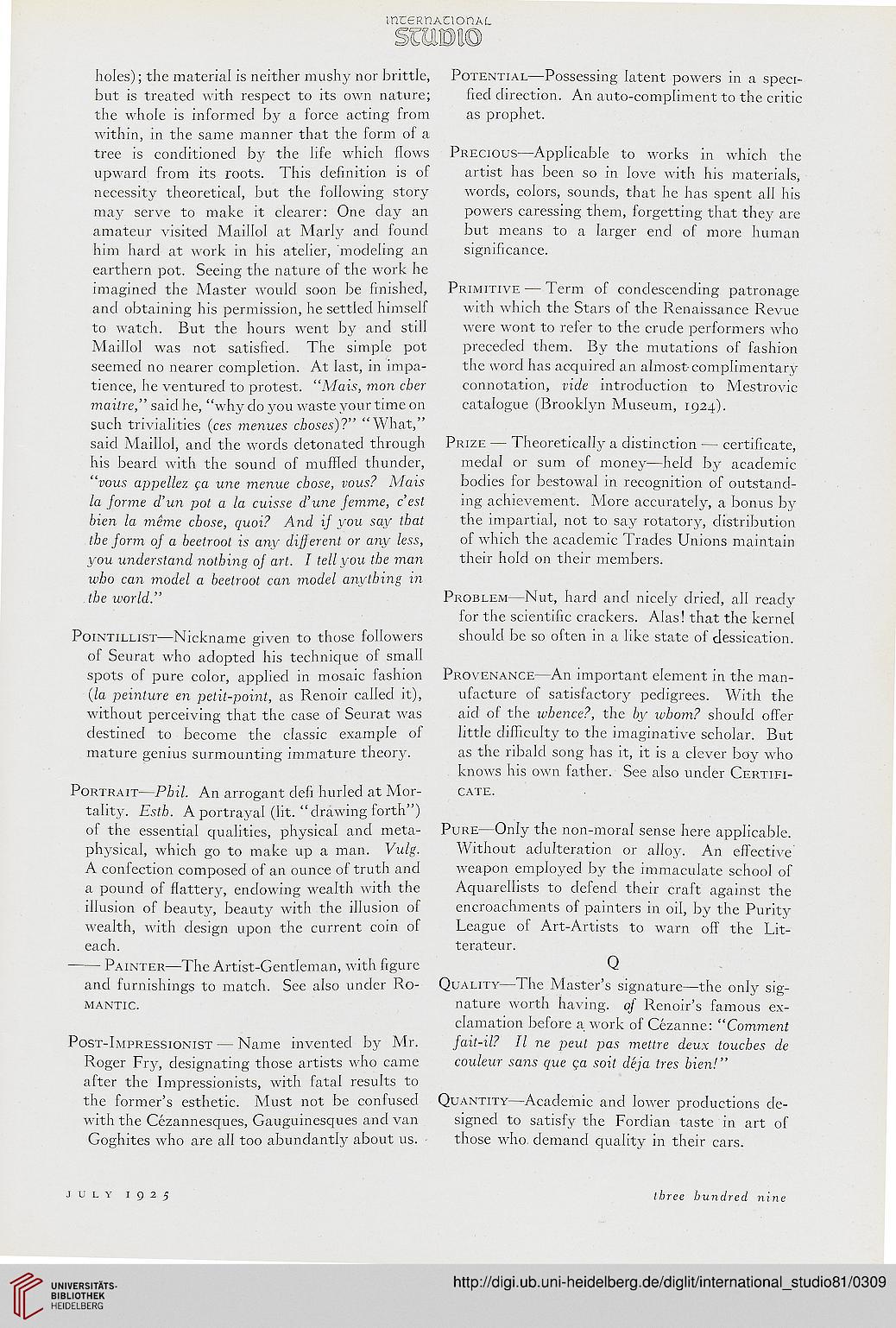 holes); the material is neither mushy nor brittle,
but is treated with respect to its own nature;
the whole is informed by a force acting from
within, in the same manner that the form of a
tree is conditioned by the life which flows
upward from its roots. This definition is of
necessity theoretical, but the following story
may serve to make it clearer: One day an
amateur visited Maillol at Marly and found
him hard at work in his atelier, modeling an
earthern pot. Seeing the nature of the work he
imagined the A-Iaster would soon be finished,
and obtaining his permission, he settled himself
to watch. But the hours went by and still
Maillol was not satisfied. The simple pot
seemed no nearer completion. At last, in impa-
tience, he ventured to protest. "Mais, mon cber
maitre," said he, "why do you waste your time on
such trivialities (ces menues choses)?" "What,"
said Maillol, and the words detonated through
his beard with the sound of muffled thunder,
"vous appellez ga une rrienue chose, vous? Mais
la forme d'un pot a la cuisse d'une jemme, c'est
bien la meme chose, quoi? And if you say that
the Jorm of a beetroot is any different or any less,
you understand nothing of art. I tell you the man
who can model a beetroot can model anything in
the world."

Pointillist—Nickname given to those followers
of Seurat who adopted his technique of small
spots of pure color, applied in mosaic fashion
[la peinture en petit-point, as Renoir called it),
without perceiving that the case of Seurat was
destined to become the classic example of
mature genius surmounting immature theory.

Portrait—Phil. An arrogant defi hurled at Mor-
tality. Esth. A portrayal (lit. "drawing forth")
of the essential qualities, physical and meta-
physical, which go to make up a man. Vulg.
A confection composed of an ounce of truth and
a pound of flattery, endowing wealth with the
illusion of beauty, beauty with the illusion of
wealth, with design upon the current coin of
each.

and furnishings to match. See also under Ro-
mantic.

Post-Impressionist — Name invented by Mr.
Roger Fry, designating those artists who came
after the Impressionists, with fatal results to
the former's esthetic. Must not be confused
with the Cezannesques, Gauguinesques and van
Goghites who are all too abundantly about us.

Potential—Possessing latent powers in a speci-
fied direction. An auto-compliment to the critic
as prophet.

Precious—Applicable to works in which the
artist has been so in love with his materials,
words, colors, sounds, that he has spent all his
powers caressing them, forgetting that they are
but means to a larger end of more human
significance.

Primitive — Term of condescending patronage
with which the Stars of the Renaissance Revue
were wont to refer to the crude performers who
preceded them. By the mutations of fashion
the word has acquired an almost-complimentary
connotation, vide introduction to Mestrovic
catalogue (Brooklyn Museum, 1924).

Prize — Theoretically a distinction — certificate,
medal or sum of money—held by academic
bodies for bestowal in recognition of outstand-
ing achievement. More accurately, a bonus by
the impartial, not to say rotatory, distribution
of which the academic Trades Unions maintain
their hold on their members.

Problem—Nut, hard and nicely dried, all ready
for the scientific crackers. Alas! that the kernel
should be so often in a like state of clessication.

Provenance—An important element in the man-
ufacture of satisfactory pedigrees. With the
aid of the whence?, the by whom? should offer
little difficulty to the imaginative scholar. But
as the ribald song has it, it is a clever boy who
knows his own father. See also under Certifi-
cate.

Pure—Only the non-moral sense here applicable.
Without adulteration or alloy. An effective'
weapon employed by the immaculate school of
Aquarellists to defend their craft against the
encroachments of painters in oil, by the Purity
League of Art-Artists to warn off the Lit-
terateur.

Quantity—Academic and lower productions de-
signed to satisfy the Fordian taste in art of
those who. demand quality in their cars.