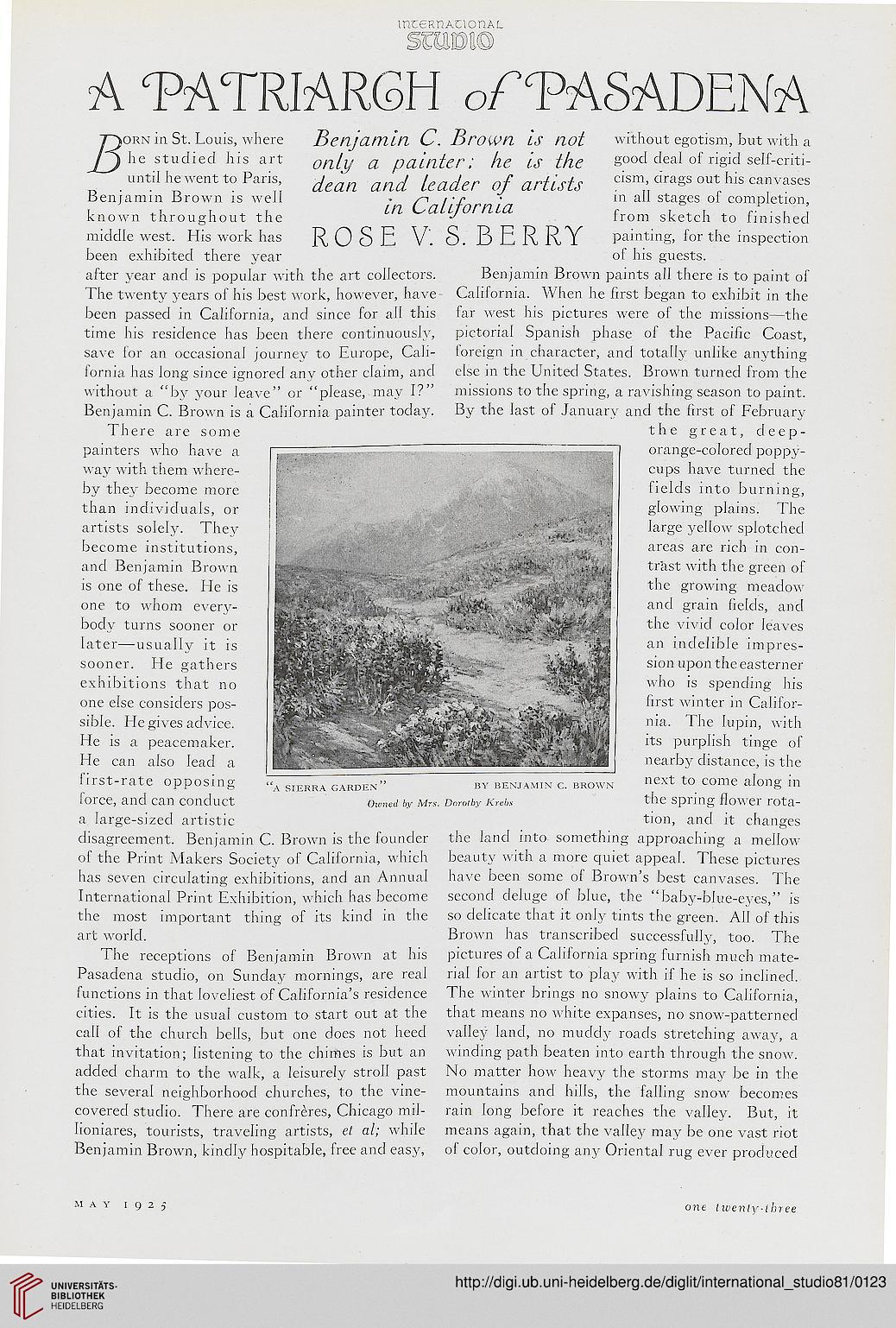 T)orn in St. Louis, where Benjamin C.Brown is not without egotism, but with a
/") he studied his art on[y a painter; he is the good deal of rigid self-criti-
until he went to Paris, dgan and [gadgr Qf arfuts cism drags out his canvases
Benjamin Brown is well • p l'.fnrn,n 111 ali staees ol completion,
known throughout the Ln ^auJorniCL from sketch to finished
middle west. His work has R 0 8 E V. 8. B E R R Y painting, for the inspection
been exhibited there year of his guests,
after year and is popular with the art collectors. Benjamin Brown paints all there is to paint of
The twenty years of his best work, however, have California. When he first began to exhibit in the
been passed in California, and since for all this far west his pictures were of the missions—the
time his residence has been there continuously, pictorial Spanish phase of the Pacific Coast,
save for an occasional journey to Europe, Cali- foreign in character, and totally unlike anything
fornia has long since ignored any other claim, and else in the United States. Brown turned from the
without a "by your leave" or "please, may I?" missions to the spring, a ravishing season to paint.
Benjamin C. Brown is a California painter today. By the last of January and the first of February
There are some the great, deep-
painters who have a (T7-_"-' ~~~ v r7~.I orange-colored poppy-
way with them where- CUPS have turned the
by they become more fields into burning,
than individuals, or . ; glowing plains. The
artists solely. They . large yellow splotched
become institutions, ;,rcas arc ricl1 ln t-on-
and Benjamin Brown tri,st with the green of
is one of these. I le is £ _ .. , ;j> ' ' kid^^MM thc Rowing meadow
one to whom every- • V''*|P^TP ancI Srain flcIds> ancl

first-rate oppoMn.u ~ ~~ > , n c brown next to come along in
force, and can conduct Owned by Mrs. Dorothy Krebs the spring flower rota-
a large-sized artistic tlon> ancI changes
disagreement. Benjamin C. Brown is the founder the land into something approaching a mellow
of the Print Makers Society of California, which beauty with a more quiet appeal. These pictures
has seven circulating exhibitions, and an Annual have been some of Brown's best canvases. The
International Print Exhibition, which has become second deluge of blue, thc "baby-blue-eyes," is
the most important thing of its kind in the so delicate that it only tints the green. All of this
art world. Brown has transcribed successfully, too. The
The receptions of Benjamin Brown at his pictures of a California spring furnish much mate-
Pasadena studio, on Sunday mornings, are real rial for an artist to play with if he is so inclined,
functions in that loveliest of California's residence The winter brings no snowy plains to California,
cities. It is the usual custom to start out at the that means no white expanses, no snow-patterned
call of the church bells, but one does not heed valley land, no muddy roads stretching away, a
that invitation; listening to the chimes is but an winding path beaten into earth through the snow,
added charm to the walk, a leisurely stroll past No matter how heavy the storms may be in the
the several neighborhood churches, to the vine- mountains and hills, the falling snow becomes
covered studio. There are confreres, Chicago mil- rain long before it reaches the valley. But, it
Iioniarcs, tourists, traveling artists, el al; while means again, that the valley may be one vast riot
Benjamin Brown, kindly hospitable, free and easy, of color, outdoing any Oriental rug ever produced