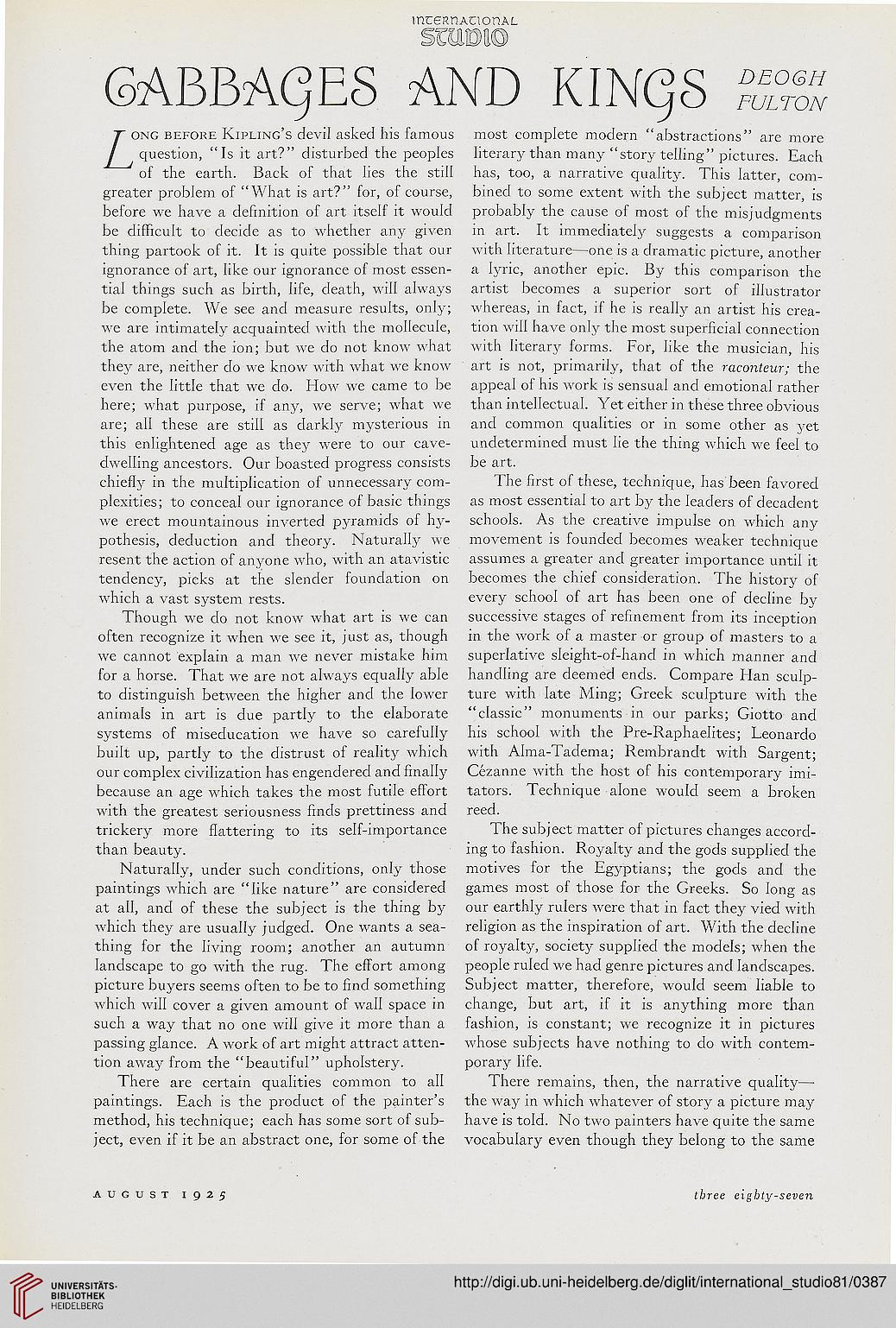 7~ ong before Kipling's devil asked his famous most complete modern "abstractions" are more
/ question, " Is it art?" disturbed the peoples literary than many "story telling" pictures. Each
of the earth. Back of that lies the still has, too, a narrative quality. This latter, corn-
greater problem of "What is art?" for, of course, bined to some extent with the subject matter, is
before we have a definition of art itself it would probably the cause of most of the misjudgments
be difficult to decide as to whether any given in art. It immediately suggests a comparison
thing partook of it. It is quite possible that our with literature—one is a dramatic picture, another
ignorance of art, like our ignorance of most essen- a lyric, another epic. By this comparison the
tial things such as birth, life, death, will always artist becomes a superior sort of illustrator
be complete. We see and measure results, only; whereas, in fact, if he is really an artist his crea-
we are intimately acquainted with the mollecule, tion will have only the most superficial connection
the atom and the ion; but we do not know what with literary forms. For, like the musician, his
they are, neither do we know with what we know art is not, primarily, that of the raconteur; the
even the little that we do. How we came to be appeal of his work is sensual and emotional rather
here; what purpose, if any, we serve; what we than intellectual. Yet either in these three obvious
are; all these are still as darkly mysterious in and common qualities or in some other as yet
this enlightened age as they were to our cave- undetermined must lie the thing which we feel to
dwelling ancestors. Our boasted progress consists be art.

chiefly in the multiplication of unnecessary com- The first of these, technique, has been favored
plexities; to conceal our ignorance of basic things as most essential to art by the leaders of decadent
we erect mountainous inverted pyramids of hy- schools. As the creative impulse on which any
pothesis, deduction and theory. Naturally we movement is founded becomes weaker technique
resent the action of anyone who, with an atavistic assumes a greater and greater importance until it
tendency, picks at the slender foundation on becomes the chief consideration. The history of
which a vast system rests. every school of art has been one of decline by
Though we do not know what art is we can successive stages of refinement from its inception
often recognize it when we see it, just as, though in the work of a master or group of masters to a
we cannot explain a man we never mistake him superlative sleight-of-hand in which manner and
for a horse. That we are not always equally able handling are deemed ends. Compare Han sculp-
to distinguish between the higher and the lower ture with late Ming; Greek sculpture with the
animals in art is due partly to the elaborate "classic" monuments in our parks; Giotto and
systems of miscducation we have so carefully his school with the Pre-Raphaelites; Leonardo
built up, partly to the distrust of reality which with Alma-Tadema; Rembrandt with Sargent;
our complex civilization has engendered and finally Cezanne with the host of his contemporary imi-
because an age which takes the most futile effort tators. Technique alone would seem a broken
with the greatest seriousness finds prettiness and reed.

than beauty. ing to fashion. Royalty and the gods supplied the

Naturally, under such conditions, only those motives for the Egyptians; the gods and the

paintings which are "like nature" are considered games most of those for the Greeks. So long as

at all, and of these the subject is the thing by our earthly rulers were that in fact they vied with

which they are usually judged. One wants a sea- religion as the inspiration of art. With the decline

thing for the living room; another an autumn of royalty, society supplied the models; when the

landscape to go with the rug. The effort among people ruled we had genre pictures and landscapes,

picture buyers seems often to be to find something Subject matter, therefore, would seem liable to

which will cover a given amount of wall space in change, but art, if it is anything more than

such a way that no one will give it more than a fashion, is constant; we recognize it in pictures

passing glance. A work of art might attract atten- whose subjects have nothing to do with contem-

tion away from the "beautiful" upholstery. porary life.

There are certain qualities common to all There remains, then, the narrative quality—

paintings. Each is the product of the painter's the way in which whatever of story a picture may

method, his technique; each has some sort of sub- have is told. No two painters have quite the same

ject, even if it be an abstract one, for some of the vocabulary even though they belong to the same