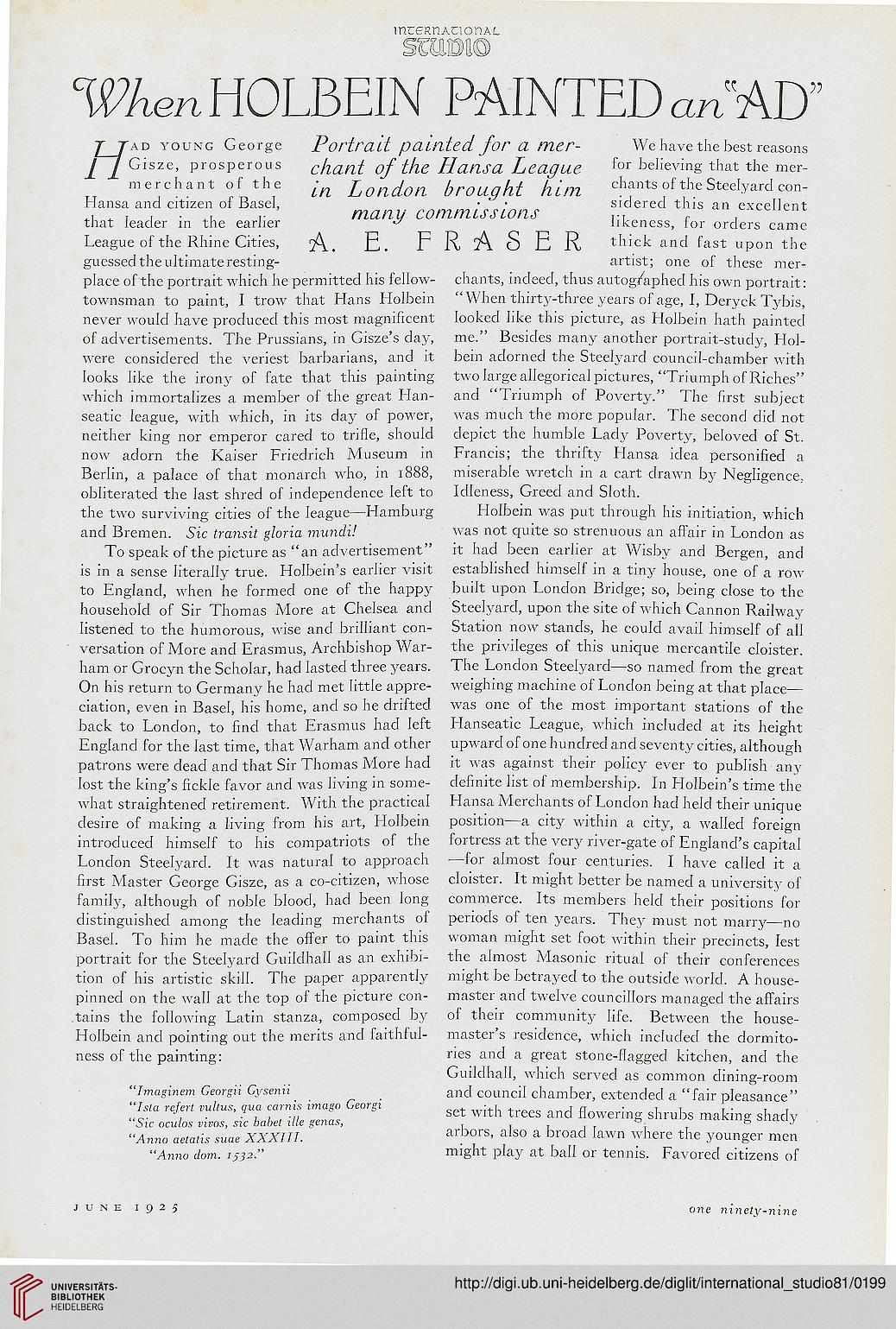 Information about OCR text
When HOLBEIN PAINTED an AD

J Jat> young George
£ f Gisze, prosperous
merchant of the
Hansa and citizen of Basel,
that leader in the earlier
League of the Rhine Cities,
guessed the ultimate resting-
place of the portrait which he permitted his fellow-
townsman to paint, I trow that Hans Holbein
never would have produced this most magnificent
of advertisements. The Prussians, in Gisze's day,
were considered the veriest barbarians, and it
looks like the irony of fate that this painting
which immortalizes a member of the great Han-
seatic league, with which, in its day of power,
neither king nor emperor cared to trifle, should
now adorn the Kaiser Friedrich Museum in
Berlin, a palace of that monarch who, in 1888,
obliterated the last shred of independence left to
the two surviving cities of the league—Hamburg
and Bremen. Sic transit gloria mundi!

To speak of the picture as "an advertisement"
is in a sense literally true. Holbein's earlier visit
to England, when he formed one of the happy
household of Sir Thomas More at Chelsea and
listened to the humorous, wise and brilliant con-
versation of More and Erasmus, Archbishop War-
ham or Grocyn the Scholar, had lasted three years.
On his return to Germany he had met little appre-
ciation, even in Basel, his home, and so he drifted
back to London, to find that Erasmus had left
England for the last time, that Warham and other
patrons were dead and that Sir Thomas More had
lost the king's fickle favor and was living in some-
what straightened retirement. With the practical
desire of making a living from his art, Holbein
introduced himself to his compatriots of the
London Steelyard. It was natural to approach
first Master George Gisze, as a co-citizen, whose
family, although of noble blood, had been long
distinguished among the leading merchants of
Basel. To him he made the offer to paint this
portrait for the Steelyard Guildhall as an exhibi-
tion of his artistic skill. The paper apparently
pinned on the wall at the top of the picture con-
tains the following Latin stanza, composed by
Holbein and pointing out the merits and faithful-
ness of the painting:

We have the best reasons
for believing that the mer-
chants of the Steelyard con-
sidered this an excellent
likeness, for orders came
thick and fast upon the
artist; one of these mer-
chants, indeed, thus autographed his own portrait:
"When thirty-three years of age, I, Deryck Tybis,
looked like this picture, as Holbein hath painted
me." Besides many another portrait-study, Hol-
bein adorned the Steelyard council-chamber with
two large allegorical pictures, "Triumph of Riches"
and "Triumph of Poverty." The first subject
was much the more popular. The second did not
depict the humble Lady Poverty, beloved of St.
Francis; the thrifty Hansa idea personified a
miserable wretch in a cart drawn by Negligence,
Idleness, Greed and Sloth.

Holbein was put through his initiation, which
was not quite so strenuous an affair in London as
it had been earlier at Wisby and Bergen, and
established himself in a tiny house, one of a row
built upon London Bridge; so, being close to the
Steelyard, upon the site of which Cannon Railway
Station now stands, he could avail himself of all
the privileges of this unique mercantile cloister.
The London Steelyard—so named from the great
weighing machine of London being at that place—
was one of the most important stations of the
Hanseatic League, which included at its height
upward of one hundred and seventy cities, although
it was against their policy ever to publish any
definite list of membership. In Holbein's time the
Hansa Merchants of London had held their unique
position—a city within a city, a walled foreign
fortress at the very river-gate of England's capital
—for almost four centuries. I have called it a
cloister. It might better be named a university of
commerce. Its members held their positions for
periods of ten years. They must not marry—no
woman might set foot within their precincts, lest
the almost Masonic ritual of their conferences
might be betrayed to the outside world. A house-
master and twelve councillors managed the affairs
of their community life. Between the house-
master's residence, which included the dormito-
ries and a great stone-flagged kitchen, and the
Guildhall, which served as common dining-room
and council chamber, extended a "fair pleasance"
set with trees and flowering shrubs making shady
arbors, also a broad lawn where the younger men
might play at ball or tennis. Favored citizens of