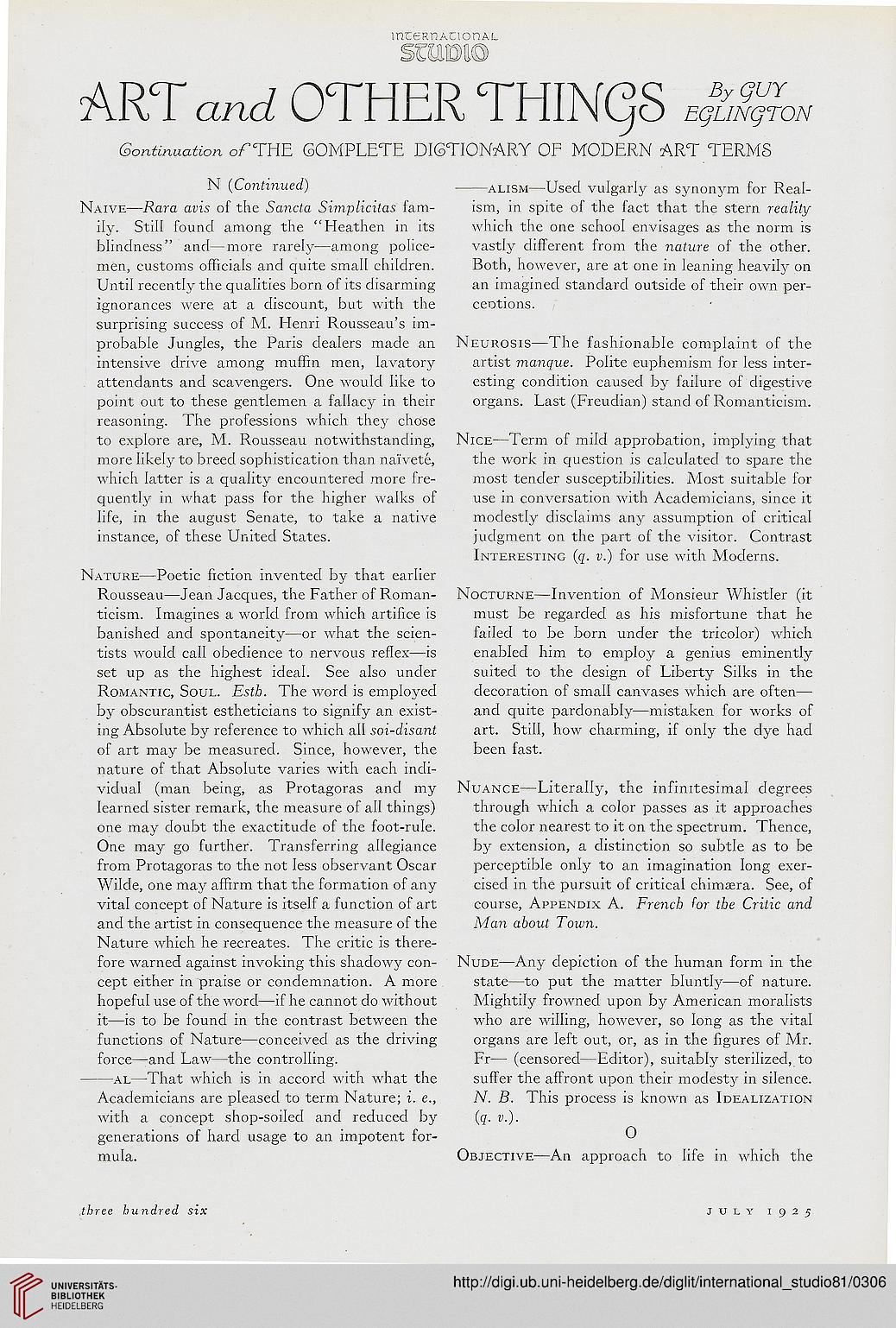 Naive—Rara avis of the Sancta Simplicitas fam-
ily. Still found among the "Heathen in its
blindness" and—more rarely—among police-
men, customs officials and quite small children.
Until recently the qualities born of its disarming
ignorances were at a discount, but with the
surprising success of M. Henri Rousseau's im-
probable Jungles, the Paris dealers made an
intensive drive among muffin men, lavatory

. attendants and scavengers. One would like to
point out to these gentlemen a fallacy in their
reasoning. The professions which they chose
to explore are, M. Rousseau notwithstanding,
more likely to breed sophistication than naivete,
which latter is a quality encountered more fre-
quently in what pass for the higher walks of
life, in the august Senate, to take a native
instance, of these United States.

Nature—Poetic fiction invented by that earlier
Rousseau—Jean Jacques, the Father of Roman-
ticism. Imagines a world from which artifice is
banished and spontaneity—or what the scien-
tists would call obedience to nervous reflex—is
set up as the highest ideal. See also under
Romantic, Soul. Esth. The word is employed
by obscurantist estheticians to signify an exist-
ing Absolute by reference to which all soi-disant
of art may be measured. Since, however, the
nature of that Absolute varies with each indi-
vidual (man being, as Protagoras and my
learned sister remark, the measure of all things)
one may doubt the exactitude of the foot-rule.
One may go further. Transferring allegiance
from Protagoras to the not less observant Oscar
Wilde, one may affirm that the formation of any
vital concept of Nature is itself a function of art
and the artist in consequence the measure of the
Nature which he recreates. The critic is there-
fore warned against invoking this shadowy con-
cept either in praise or condemnation. A more
hopeful use of the word—if he cannot do without
it—is to be found in the contrast between the
functions of Nature—conceived as the driving
force—-and Law—the controlling.

-al—That which is in accord with what the

Academicians are pleased to term Nature; i. e.,
with a concept shop-soiled and reduced by
generations of hard usage to an impotent for-
mula.

-alism—Used vulgarly as synonym for Real-
ism, in spite of the fact that the stern reality
which the one school envisages as the norm is
vastly different from the nature of the other.
Both, however, are at one in leaning heavily on
an imagined standard outside of their own per-
ceotions. J •

Nice—Term of mild approbation, implying that
the work in question is calculated to spare the
most tender susceptibilities. Most suitable for
use in conversation with Academicians, since it
modestly disclaims any assumption of critical
judgment on the part of the visitor. Contrast
Interesting (q. v.) for use with Moderns.

Nocturne—Invention of Monsieur Whistler (it
must be regarded as his misfortune that he
failed to be born under the tricolor) which
enabled him to employ a genius eminently
suited to the design of Liberty Silks in the
decoration of small canvases which are often—
and quite pardonably—mistaken for works of
art. Still, how charming, if only the dye had
been fast.

Nuance—Literally, the infinitesimal degrees
through which a color passes as it approaches
the color nearest to it on the spectrum. Thence,
by extension, a distinction so subtle as to be
perceptible only to an imagination long exer-
cised in the pursuit of critical chimaera. See, of
course, Appendix A. French for the Critic and
Man about Town.

Nude—Any depiction of the human form in the
state—to put the matter bluntly—of nature.
Mightily frowned upon by American moralists
who are willing, however, so long as the vital
organs are left out, or, as in the figures of Mr.
Fr— (censored—Editor), suitably sterilized, to
suffer the affront upon their modesty in silence.
N. B. This process is known as Idealization
(q. v.).

Objective—An approach to life in which the