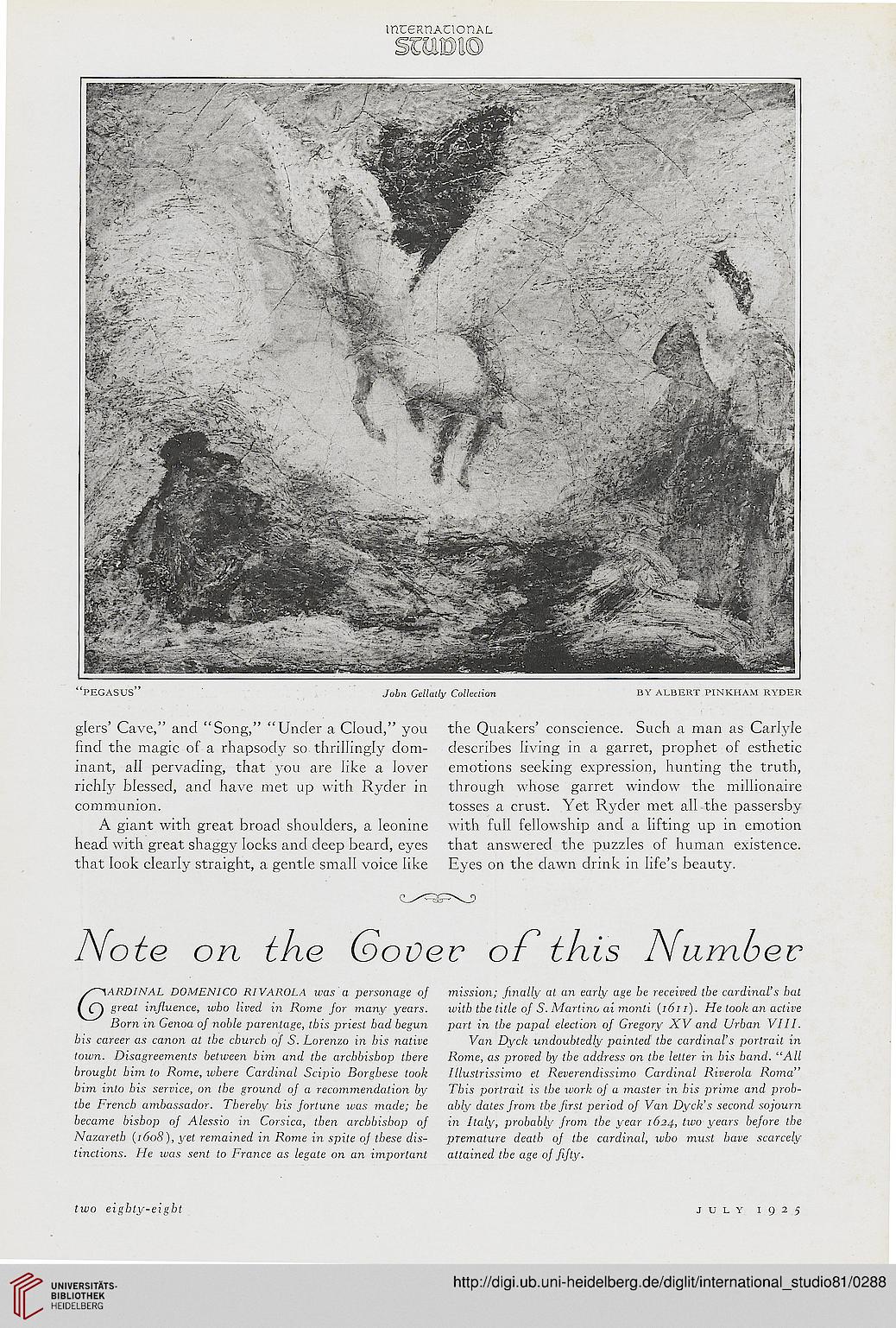 glers' Cave," and "Song," "Under a Cloud," you the Quakers' conscience. Such a man as Carlyle

find the magic of a rhapsody so thrillingly dom- describes living in a garret, prophet of esthetic

inant, all pervading, that you are like a lover emotions seeking expression, hunting the truth,

richly blessed, and have met up with Ryder in through whose garret window the millionaire

communion. tosses a crust. Yet Ryder met all the passersby

A giant with great broad shoulders, a leonine with full fellowship and a lifting up in emotion

head with great shaggy locks and deep beard, eyes that answered the puzzles of human existence,

that look clearly straight, a gentle small voice like Eyes on the dawn drink in life's beauty.

Note on the Govev of this Number

ARDINAL DOMENICO RIVAROLA was a personage of
great influence, who lived in Rome for many years.
Born in Genoa of noble parentage, this priest had begun
his career as canon at the church of S. Lorenzo in his native
town. Disagreements between him and the archbishop there
brought him to Rome, where Cardinal Scipio Borghese look
him into his service, on the ground of a recommendation by
the French ambassador. Thereby his fortune ivas made; he
became bishop of Alessio in Corsica, then archbishop of
Nazareth (1608), yet remained in Rome in spite of these dis-
tinctions. He was sent to France as legate on an important

mission; finally at an early age he received the cardinal's hat
with the title of S. Martino ai monti (1611). He took an active
part in the papal election of Gregory XV and Urban VIII.

Van Dyck undoubtedly painted the cardinal's portrait in
Rome, as proved by the address on the letter in his hand. "All
Illustrissimo et Reverendissimo Cardinal Riverola Roma"
This portrait is the work of a master in his prime and prob-
ably dates from the first period of Van Dyck's second sojourn
in Italy, probably from the year 1624, two years before the
premature death of the cardinal, who must have scarcely
attained the age of fifty.