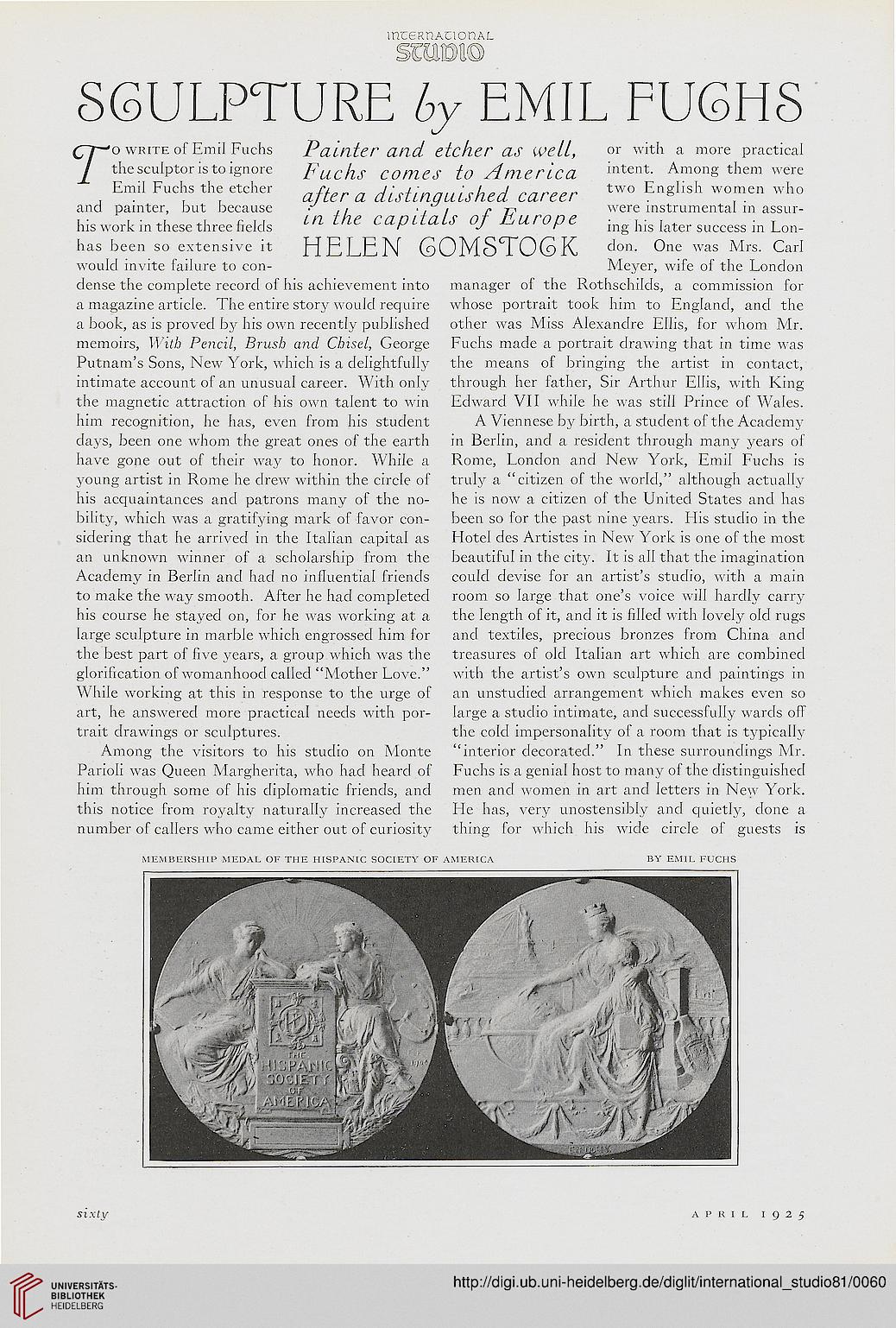 ro write of Emil Fuchs Painter and etcher as Well, or with a more practical
the sculptor is to ignore FucllS COtneS to America intent- Among them were

would invite failure to con- Meyer, wife of the London

dense the complete record of his achievement into manager of the Rothschilds, a commission for

a magazine article. The entire story would require whose portrait took him to England, and the

a book, as is proved by his own recently published other was Miss Alexandre Ellis, for whom Mr.

memoirs, With Pencil, Brush and Chisel, George Fuchs made a portrait drawing that in time was

Putnam's Sons, New York, which is a delightfully the means of bringing the artist in contact,

intimate account of an unusual career. With only through her father, Sir Arthur Ellis, with King

the magnetic attraction of his own talent to win Edward VII while lie was still Prince of Wales,

him recognition, he has, even from his student A Viennese by birth, a student of the Academy

days, been one whom the great ones of the earth in Berlin, and a resident through many years of

have gone out of their way to honor. While a Rome, London and New York, Emil Fuchs is

young artist in Rome he drew within the circle of truly a "citizen of the world," although actually

bility, which was a gratifying mark of favor con- been so for the past nine years. His studio in the

an unknown winner of a scholarship from the beautiful in the city. It is all that the imagination

Academy in Berlin and had no influential friends could devise for an artist's studio, with a main

to make the way smooth. After he had completed room so large that one's voice will hardly carry

his course he stayed on, for he was working at a the length of it, and it is filled with lovely old rugs

large sculpture in marble which engrossed him for and textiles, precious bronzes from China and

the best part of five years, a group which was the treasures of old Italian art which are combined

glorification of womanhood called "Mother Love." with the artist's own sculpture and paintings in

art, he answered more practical needs with por- large a studio intimate, and successfully wards off

trait drawings or sculptures. the cold impersonality of a room that is typically

Among the visitors to his studio on Monte "interior decorated." In these surroundings Mr.

Parioli was Queen Margherita, who had heard of Fuchs is a genial host to many of the distinguished

him through some of his diplomatic friends, and men and women in art and letters in New York,

this notice from royalty naturally increased the FIc has, very unostensibly and quietly, done a

MEMBERSHIP MEDAL OF THE HISPANIC SOCIETY OF AMERICA BY EMIL FUCHS