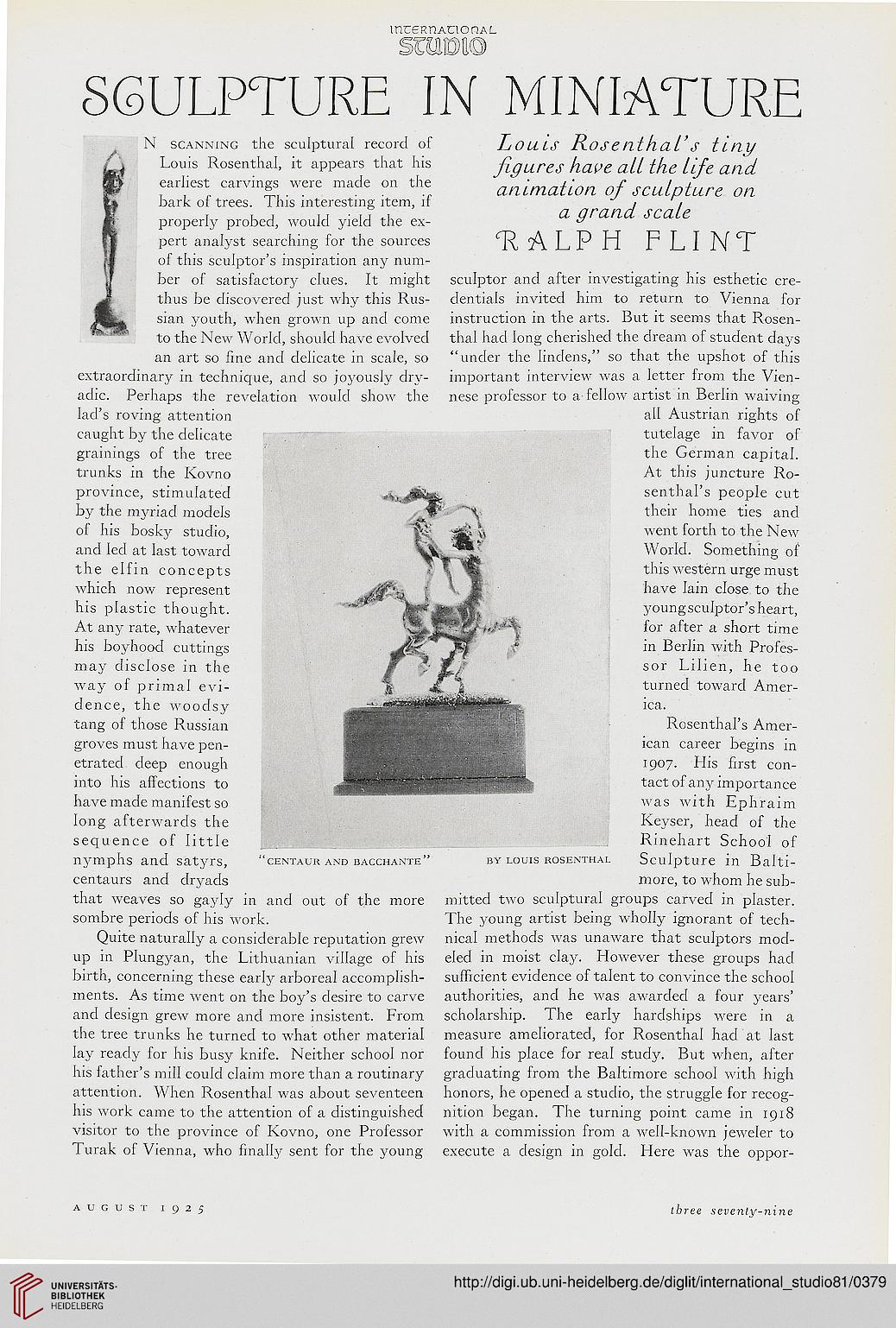 Louis Rosenthal, it appears that his figures have all the life and

earliest carvings were made on the animation of sculpture on

bark of trees. This interesting item, if j i

properly probed, would yield the ex- a

ber of satisfactory clues. It might sculptor and after investigating his esthetic cre-

sian youth, when grown up and come instruction in the arts. But it seems that Rosen-

to the New World, should have evolved thai had long cherished the dream of student days

an art so fine and delicate in scale, so "under the lindens," so that the upshot of this

extraordinary in technique, and so joyously dry- important interview was a letter from the Vien-

adic. Perhaps the revelation would show the nese professor to a fellow artist in Berlin waiving

caught by the delicate tutelage in favor of

grainings of the tree the German capital,

trunks in the Kovno At this juncture Ro-

by the myriad models *\ their home ties and

and led at last toward VV^fc World. Something of

the elfin concepts ? \ this western urge must

At any rate, whatever S&S?!*' —''':\ for after a short time
his boyhood cuttings V7 m Berlin with Profes-
may disclose in the W y E/ sor Lilien, he too
way of primal evi- % i i turned toward Amer-
dence, the woodsy ica.
tang of those Russian Rosenthal's Amer-
groves must have pen- ican career begins in
etrated deep enough r9°7- His first con-
into his affections to tact of any importance
have made manifest so was with Ephraim
long afterwards the Keyser, head of the
sequence of little Hi Rinehart School of
nymphs and satyrs, "centaur and bacchante" by louts Rosenthal Sculpture in Balti-
centaurs and dryads more, to whom he sub-
that weaves so gayly in and out of the more mitted two sculptural groups carved in plaster,
sombre periods of his work. The young artist being wholly ignorant of tech-
Quite naturally a considerable reputation grew nical methods was unaware that sculptors mod-
up in Plungyan, the Lithuanian village of his eled in moist clay. However these groups had
birth, concerning these early arboreal accomplish- sufficient evidence of talent to convince the school
ments. As time went on the boy's desire to carve authorities, and he was awarded a four years'
and design grew more and more insistent. From scholarship. The early hardships were in a
the tree trunks he turned to what other material measure ameliorated, for Rosenthal had at last
lay ready for his busy knife. Neither school nor found his place for real study. But when, after
his father's mill could claim more than a routinary graduating from the Baltimore school with high
attention. When Rosenthal was about seventeen honors, he opened a studio, the struggle for recog-
his work came to the attention of a distinguished nition began. The turning point came in 1918
visitor to the province of Kovno, one Professor with a commission from a well-known jeweler to
Turak of Vienna, who finally sent for the young execute a design in gold. Here was the oppor-