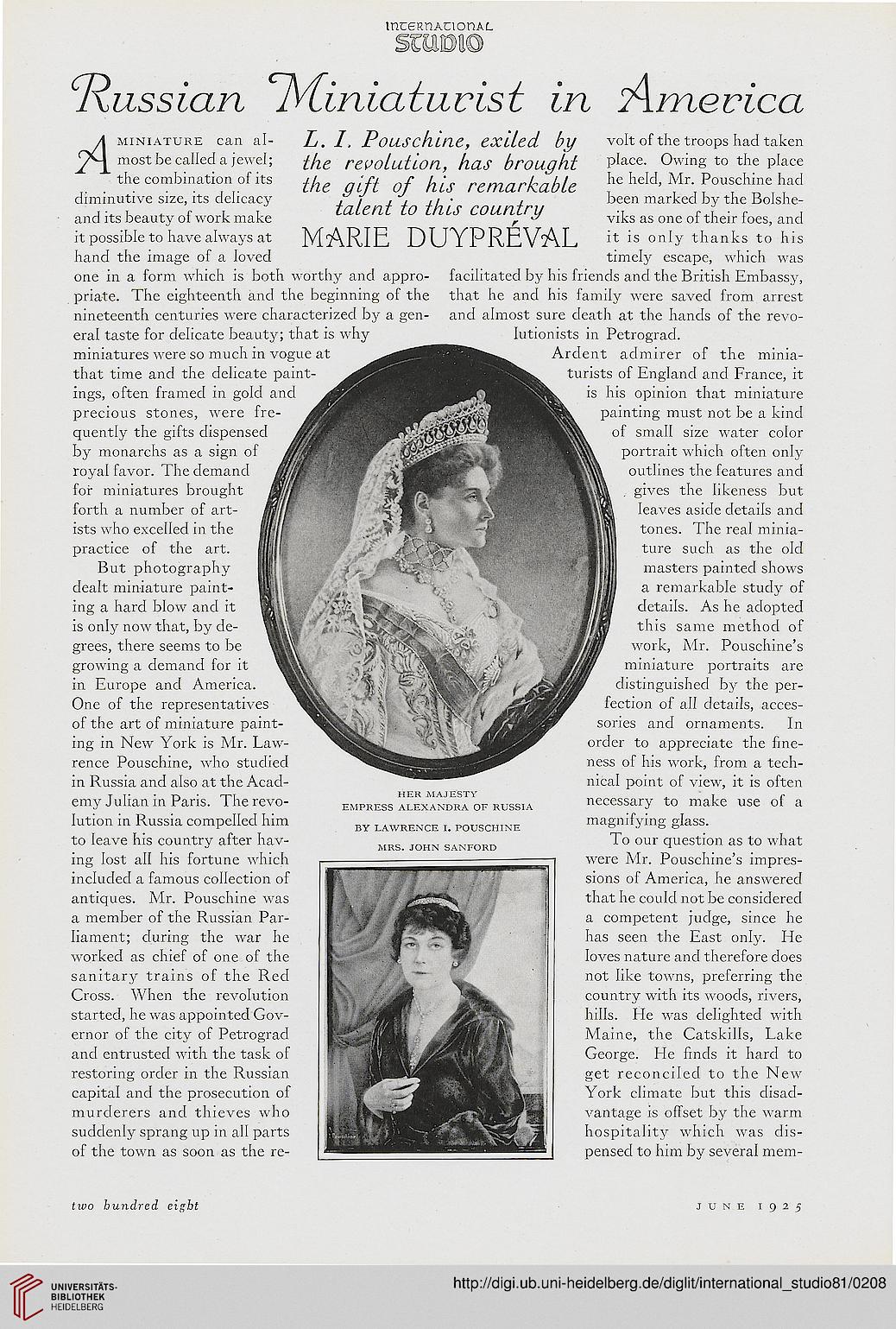 /\ miniature can al- Zj . I, Pouschine, exiled by volt of the troops had taken

2^ most be called a jewel; {ne revolution, has brought PIace- Owing to the place

the combination of its fa -ft Q r ^ remar^le he held, Mr Pouschine had

and its beauty ot work make r & viks as one of their toes, and

it possible to have always at MARIE DUYPREVAL it is only thanks to his
hand the image of a loved timely escape, which was

one in a form which is both worthy and appro- facilitated by his friends and the British Embassy,
priate. The eighteenth and the beginning of the that he and his family were saved from arrest
nineteenth centuries were characterized by a gen- and almost sure death at the hands of the revo-
eral taste for delicate beauty; that is why Iutionists in Petrograd.

that time and the delicate paint- J0tk Hfe>, turists of England and France, it

ists who excelled in the till! B tones. The real minia-

practice of the art. Hi ■ M ture such as the old

grees, there seems to be «Kf s/lfff wor^' Mr. Pouschine's

growing a demand for it Jf/m miniature portraits are
in Europe and America. ^Hk PS/SaXO* t jj^kwtr distinguished by the per-

Onc of the representatives «^ '^SKamW Action of all details, acces-

rence Pouschine, who studied ^^SSSSWBl ^P^^ ness of his work, from a tech-

in Russia and also at the Acad- nical point of view, it is often

emyJuhan in Parrs. The revo- empress Alexandra of russia necessary to make use oi a

ing lost all his fortune which
included a famous collection of
antiques. Mr. Pouschine was
a member of the Russian Par-
liament; during the war he
worked as chief of one of the
sanitary trains of the Red
Cross. When the revolution
started, he was appointed Gov-
ernor of the city of Petrograd
and entrusted with the task of
restoring order in the Russian
capital and the prosecution of
murderers and thieves who
suddenly sprang up in all parts
of the town as soon as the re-

were Air. Pouschine's impres-
sions of America, he answered
that he could not be considered
a competent judge, since he
has seen the East only. He
loves nature and therefore does
not like towns, preferring the
country with its woods, rivers,
lulls. He was delighted with
Alaine, the Catskills, Lake
George. He finds it hard to
get reconciled to the New
York climate but this disad-
vantage is offset by the warm
hospitality which was dis-
pensed to him by several mem-