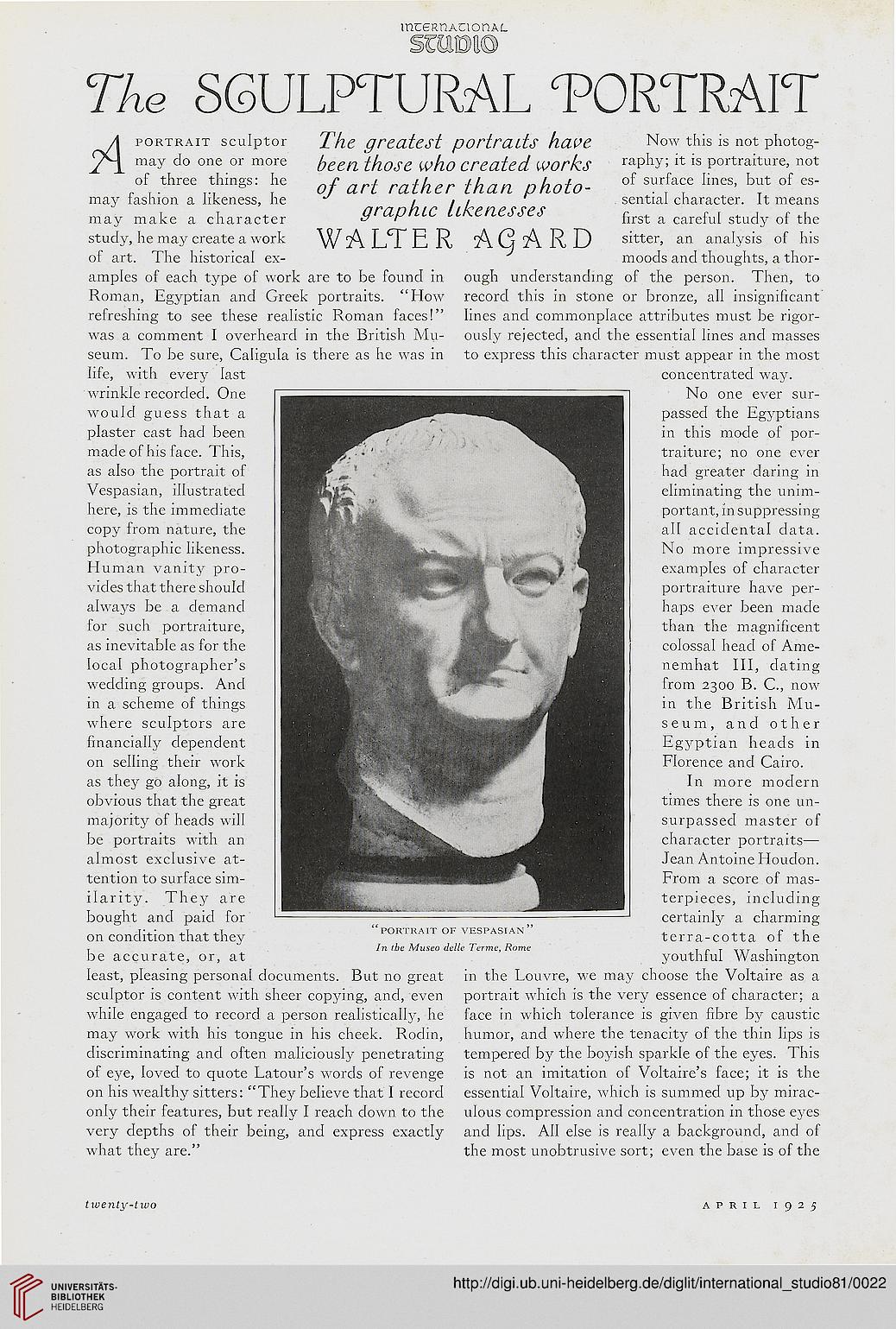 y\ may do one or more fjem f^OSe who Created Works raPhy; it is portraiture, not

may fashion a likeness, he L I L sential character. It means

may make a character graphic HKeneSSeS first & CRTeM study of the

study, he may create a work <^ LT E R AG A R D sitter, an analysis of his
of art. The historical ex- moods and thoughts, a thor-
amples of each type of work are to be found in ough understanding of the person. Then, to
Roman, Egyptian and Greek portraits. "How record this in stone or bronze, all insignificant
refreshing to see these realistic Roman faces!" lines and commonplace attributes must be rigor-
was a comment I overheard in the British Mu- ously rejected, and the essential lines and masses
seum. To be sure, Caligula is there as he was in to express this character must appear in the most
life, with every last concentrated way.

wrinkle recorded. One
would guess that a
plaster cast had been
made of his face. This,
as also the portrait of
Vespasian, illustrated
here, is the immediate
copy from nature, the
photographic likeness.
Human vanity pro-
vides that there should
always be a demand
for such portraiture,
as inevitable as for the
local photographer's
wedding groups. And
in a scheme of things
where sculptors are
financially dependent
on selling their work
as they go along, it is
obvious that the great
majority of heads will
be portraits with an
almost exclusive at-
tention to surface sim-
i I a r 11 y. They are
bought and paid for

No one ever sur-
passed the Egyptians
in this mode of por-
traiture; no one ever
had greater daring in
eliminating the unim-
portant, in suppressing
all accidental data.
No more impressive
examples of character
portraiture have per-
haps ever been made
than the magnificent
colossal head of Ame-
nemhat III, dating
from 2300 B. C, now
in the British Mu-
seum, and other
Egyptian heads in
Florence and Cairo.

In more modern
times there is one un-
surpassed master of
character portraits—
Jean Antoine Houdon.
From a score of mas-
terpieces, including
certainly a charming

on condition that they terra-cotta 01 the

be accurate, or, at youthlui Washington

least, pleasing personal documents. But no great in the Louvre, we may choose the Voltaire as a

sculptor is content witli sheer copying, and, even portrait which is the very essence of character; a

while engaged to record a person realistically, he face in which tolerance is given fibre by caustic

may work with his tongue in his cheek. Rodin, humor, and where the tenacity of the thin lips is

discriminating and often maliciously penetrating tempered by the boyish sparkle of the eyes. This

of eye, loved to quote Latour's words of revenge is not an imitation of Voltaire's face; it is the

on his wealthy sitters: "They believe that I record essential Voltaire, which is summed up by mirac-

only their features, but really I reach down to the ulous compression and concentration in those eyes

very depths of their being, and express exactly and lips. All else is really a background, and of

what they are." the most unobtrusive sort; even the base is of the