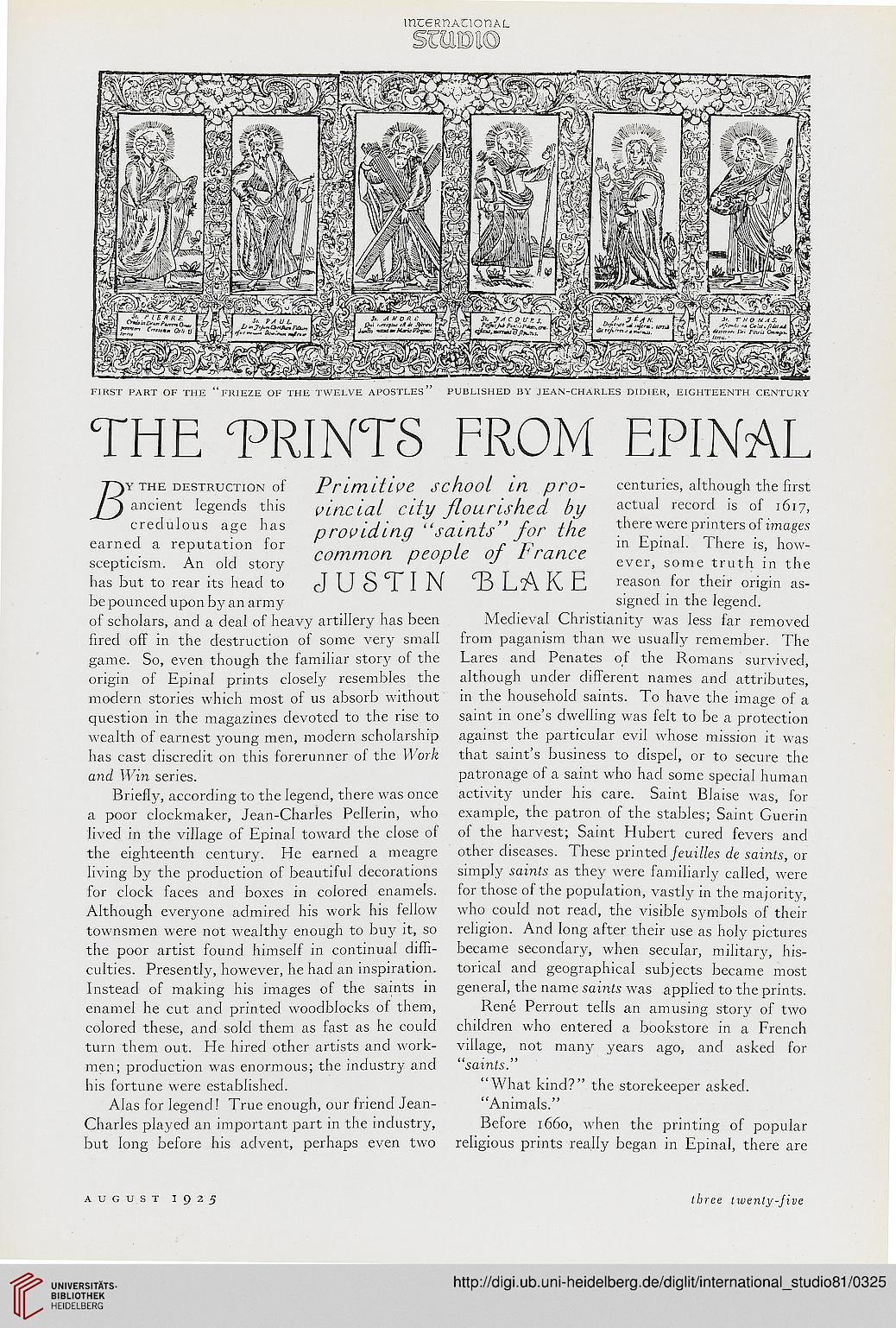 FIRST PART OF THE "FRIEZE OF THE TWELVE APOSTLES PUBLISHED BY JEAN-CHARLES DIDIER, EIGHTEENTH CENTURY

y the destruction of Primitive School in pro- centuries, although the first

ancient legends this vinclal city flourished by actuai record is of l6l7.

credulous age has providing "saints" for the therewereprmtersof images

scepticism. An old story common people of trance ever> somc truth in the

be pounced upon by an army _ signed in the legend,

of scholars, and a deal of heavy artillery has been Medieval Christianity was less far removed

fired off in the destruction of somc very small from paganism than we usually remember. The

game. So, even though the familiar story of the Lares and Penates of the Romans survived,

origin of Epinal prints closely resembles the although under different names and attributes,

modern stories which most of us absorb without in the household saints. To have the image of a

wealth of earnest young men, modern scholarship against the particular evil whose mission it was

has cast discredit on this forerunner of the Work that saint's business to dispel, or to secure the

and Win series. patronage of a saint who had some special human

Briefly, according to the legend, there was once activity under his care. Saint Blaise was, for

a poor clockmaker, Jean-Charles Pellerin, who example, the patron of the stables; Saint Guerin

lived in the village of Epinal toward the close of of the harvest; Saint Hubert cured fevers and

the eighteenth century. He earned a meagre other diseases. These printed feuilles de saints, or

living by the production of beautiful decorations simply saints as they were familiarly called, were

for clock faces and boxes in colored enamels. for those of the population, vastly in the majority,

Although everyone admired his work his fellow who could not read, the visible symbols of their

townsmen were not wealthy enough to buy it, so religion. And long after their use as holy pictures

the poor artist found himself in continual diffi- became secondary, when secular, military, his-

culties. Presently, however, he had an inspiration, torical and geographical subjects became most

Instead of making his images of the saints in general, the name saints was applied to the prints,

enamel he cut and printed woodblocks of them, Rene Perrout tells an amusing story of two

colored these, and sold them as fast as he could children who entered a bookstore in a French

turn them out. He hired other artists and work- village, not many years ago, and asked for

men; production was enormous; the industry and "saints."

his fortune were established. "What kind?" the storekeeper asked.

Charles played an important part in the industry, Before 1660, when the printing of popular

but long before his advent, perhaps even two religious prints really began in Epinal, there are