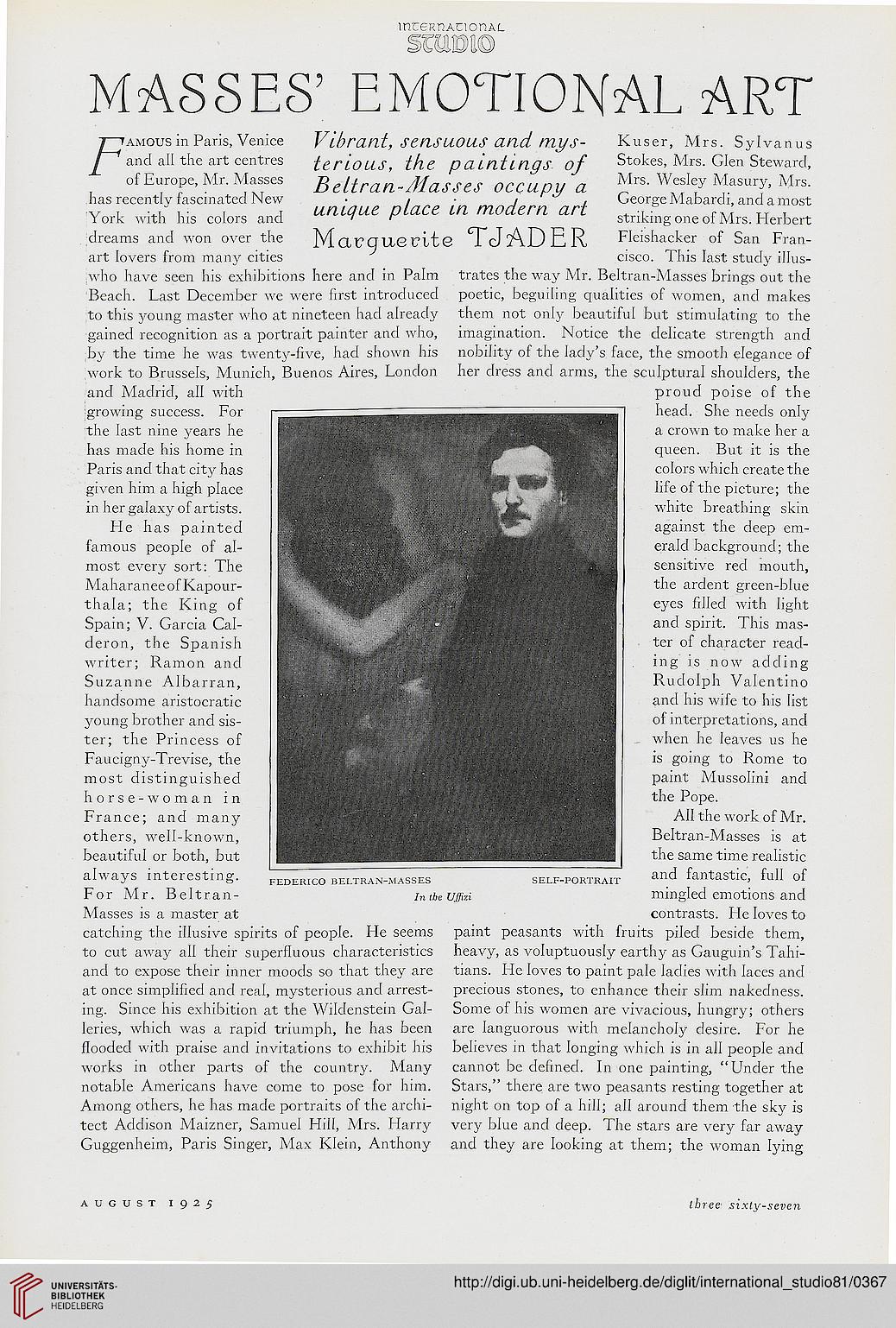 A-'and all the art centres terLOUS, the paintings of Stokes, Mrs. Glen Steward,

has recently fascinated New / • / , George Mabardi, and a most

York with his colors and ■*»«••-«/ r striking one oi Mrs. Herbert
dreams and won over the Mai?quet?ite TcJADER Fleishacker of San Fran-
art lovers from many cities cisco. This last study illus-
who have seen his exhibitions here and in Palm trates the way Mr. Beltran-Masses brings out the
Beach. Last December we were first introduced poetic, beguiling qualities of women, and makes
to this young master who at nineteen had already them not only beautiful but stimulating to the
gained recognition as a portrait painter and who, imagination. Notice the delicate strength and
by the time he was twenty-five, had shown his nobility of the lady's face, the smooth elegance of
.work to Brussels, Munich, Buenos Aires, London her dress and arms, the sculptural shoulders, the
and Madrid, all with proud poise of the
growing success. For i I head. She needs only
the last nine years he 1 a crown to make her a
has made his home in 1 queen. But it is the

Paris and that city has _____colors wh ich create the

given him a high place life of the picture; the
in her galaxy of artists. BeJeL, jflffl white breathing skin
He has painted I WM against the deep em-
famous people of al- U I erald background; the
most every sort: The 1 sensitive red month,
Maharanee of Kapour- I die ardent green-blue
thala; the King of I eyes filled with light
Spain; V. Garcia Cal- and spirit. This mas-
deron, the Spanish ter of character read-
writer; Ramon and I • ing is now adding
Suzanne Albarran, I 1 Rudolph Valentino
handsome aristocratic and his wife to his list
young brother and sis- I of interpretations, and
ter; the Princess of I when he leaves us he
. ' '. \-l rev^e. the is going to Rome to
most distinguished I paint Mussolini and
horse-woman in I die Pope.
France; and many All the work of Mr.
others, well-known, B Beltran-Masses is at
beautiful or both, but B^^HSHIHHH^BH^Hi3WMi the same time realistic
always interesting. FEDERICO beltran-masses self-portkait and fantastic, full of
For Mr. Beltran- intbeUffizi mingled emotions and
Masses is a master at contrasts. He loves to
catching the illusive spirits of people. He seems paint peasants with fruits piled beside them,
to cut away all their superfluous characteristics heavy, as voluptuously earthy as Gauguin's Tahi-
and to expose their inner moods so that they are tians. He loves to paint pale ladies with laces and
at once simplified and real, mysterious and arrest- precious stones, to enhance their slim nakedness,
ing. Since his exhibition at the Wildenstein Gal- Some of his women are vivacious, hungry; others
Ieries, which was a rapid triumph, he has been are languorous with melancholy desire. For he
flooded with praise and invitations to exhibit his believes in that longing which is in all people and
works in other parts of the country. Many cannot be defined. In one painting, "Under the
notable Americans have come to pose for him. Stars," there are two peasants resting together at
Among others, he has made portraits of the archi- night on top of a hill; all around them the sky is
tect Addison Maizner, Samuel Hill, Mrs. Harry very blue and deep. The stars are very far away
Guggenheim, Paris Singer, Max Klein, Anthony and they are looking at them; the woman lying