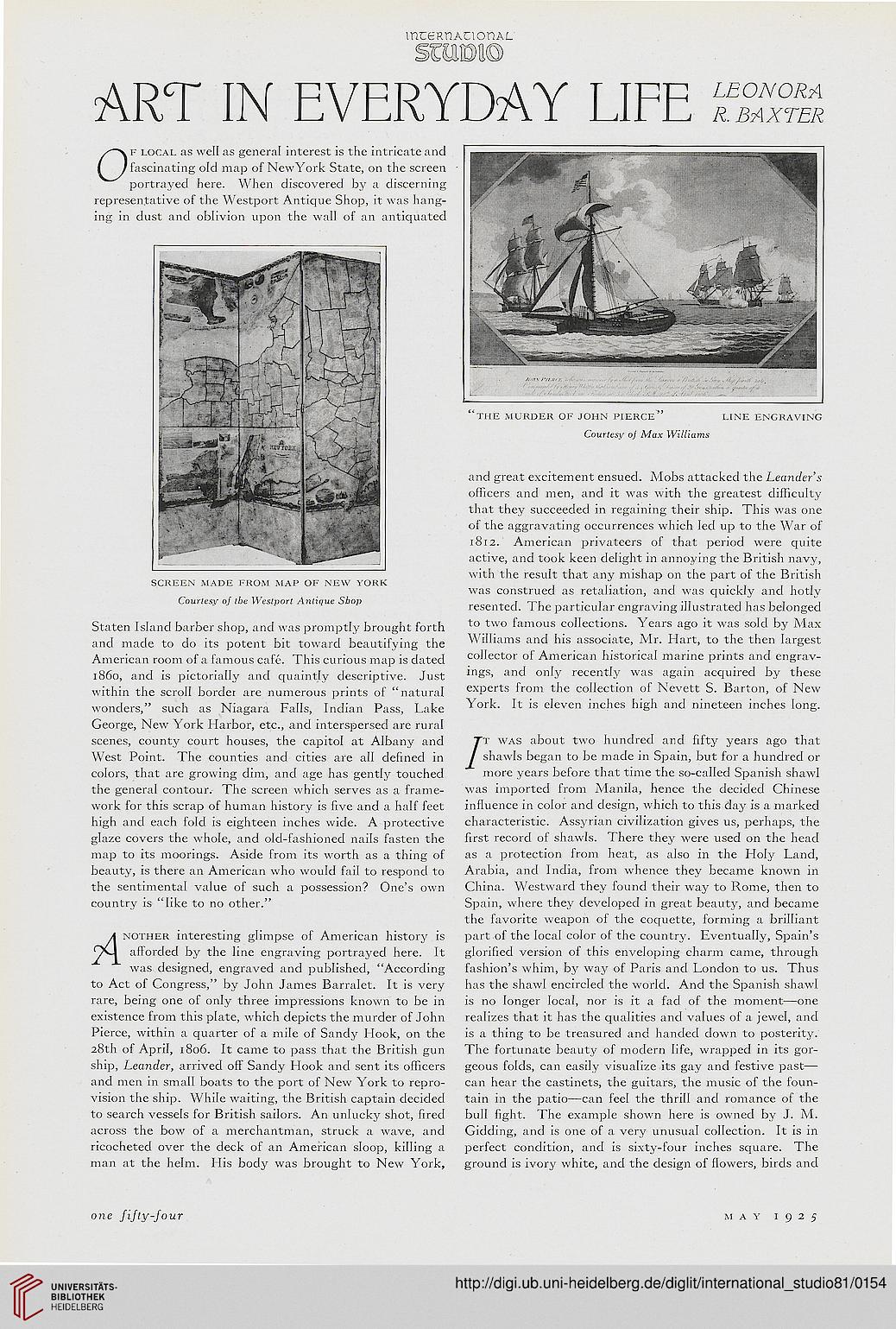 Of local as well as general interest is the intricate and
fascinating old map of NewYork State, on the screen
portrayed here. When discovered by a discerning
representative of the Westport Antique Shop, it was hang-
ing in dust and oblivion upon the wall of an antiquated

and great excitement ensued. Mobs attacked the Leander's
officers and men, and it was with the greatest difficulty
that they succeeded in regaining their ship. This was one
of the aggravating occurrences which led up to the War of
1812. American privateers of that period were quite
active, and took keen delight in annoying the British navy,
with the result that any mishap on the part of the British
was construed as retaliation, and was quickly and hotly
resented. The particular engraving illustrated has belonged
Staten Island barber shop, and was promptly brought forth to tw0 famous collections. Years ago it was sold by Max
and made to do its potent bit toward beautifying the Williams and his associate, Mr. Hart, to the then largest
American room of a famous cafe. This curious map is dated collector of American historical marine prints and engrav-
1860, and is pictorially and quaintly descriptive. Just inSs- »nd only recently was again acquired by these
within the scroll border are numerous prints of "natural experts from the collection of Nevett S. Barton, of New
wonders," such as Niagara Falls, Indian Pass, Lake York- lt is eleven inches high and nineteen inches long.
George, New York Harbor, etc., and interspersed are rural

scenes, county court houses, the capitol at Albany and 7"t was about two hundred and fifty years ago that
West Point. The counties and cities are all defined in / shawls began to be made in Spain, but for a hundred or
colors, that are growing dim, and age has gently touched more years before that time the so-called Spanish shawl

the general contour. The screen which serves as a frame- was imported from Manila, hence the decided Chinese
work for this scrap of human history is five and a half feet influence in color and design, which to this day is a marked
high and each fold is eighteen inches wide. A protective characteristic. Assyrian civilization gives us, perhaps, the
glaze covers the whole, and old-fashioned nails fasten the first record of shawls. There they were used on the head
map to its moorings. Aside from its worth as a thing of as a protection from heat, as also in the Holy Land,
beauty, is there an American who would fail to respond to Arabia, and India, from whence they became known in
the sentimental value of such a possession? One's own China. Westward they found their way to Rome, then to
country is "like to no other." Spain, where they developed in great beauty, and became

the favorite weapon of the coquette, forming a brilliant
A nother interesting glimpse of American history is part of the local color of the country. Eventually, Spain's
<~J^\ afforded by the line engraving portrayed here. It glorified version oi this enveloping charm came, through
was designed, engraved and published, "According fashion's whim, by way of Paris and London to us. Thus
to Act of Congress," by John James Barralet. It is very has the shawl encircled the world. And the Spanish shawl
rare, being one of only three impressions known to be in is no longer local, nor is it a fad of the moment—one
existence from this plate, which depicts the murder of John realizes that it has the qualities and values of a jewel, and
Pierce, within a quarter of a mile of Sandy Hook, on the is a thing to be treasured and handed down to posterity.
28th of April, 1806. It came to pass that the British gun The fortunate beauty of modern life, wrapped in its gor-
ship, Leander, arrived off Sandy Hook and sent its officers geous folds, can easily visualize its gay and festive past—
and men in small boats to the port of New York to repro- can hear the castinets, the guitars, the music of the foun-
vision the ship. While waiting, the British captain decided tain in the patio—can feel the thrill and romance of the
to search vessels for British sailors. An unlucky shot, fired bull fight. The example shown here is owned by J. M.
across the bow of a merchantman, struck a wave, and Gidding, and is one of a very unusual collection. It is in
ricocheted over the deck of an American sloop, killing a perfect condition, and is sixty-four inches square. The
man at the helm. His body was brought to New York, ground is ivory white, and the design of flowers, birds and