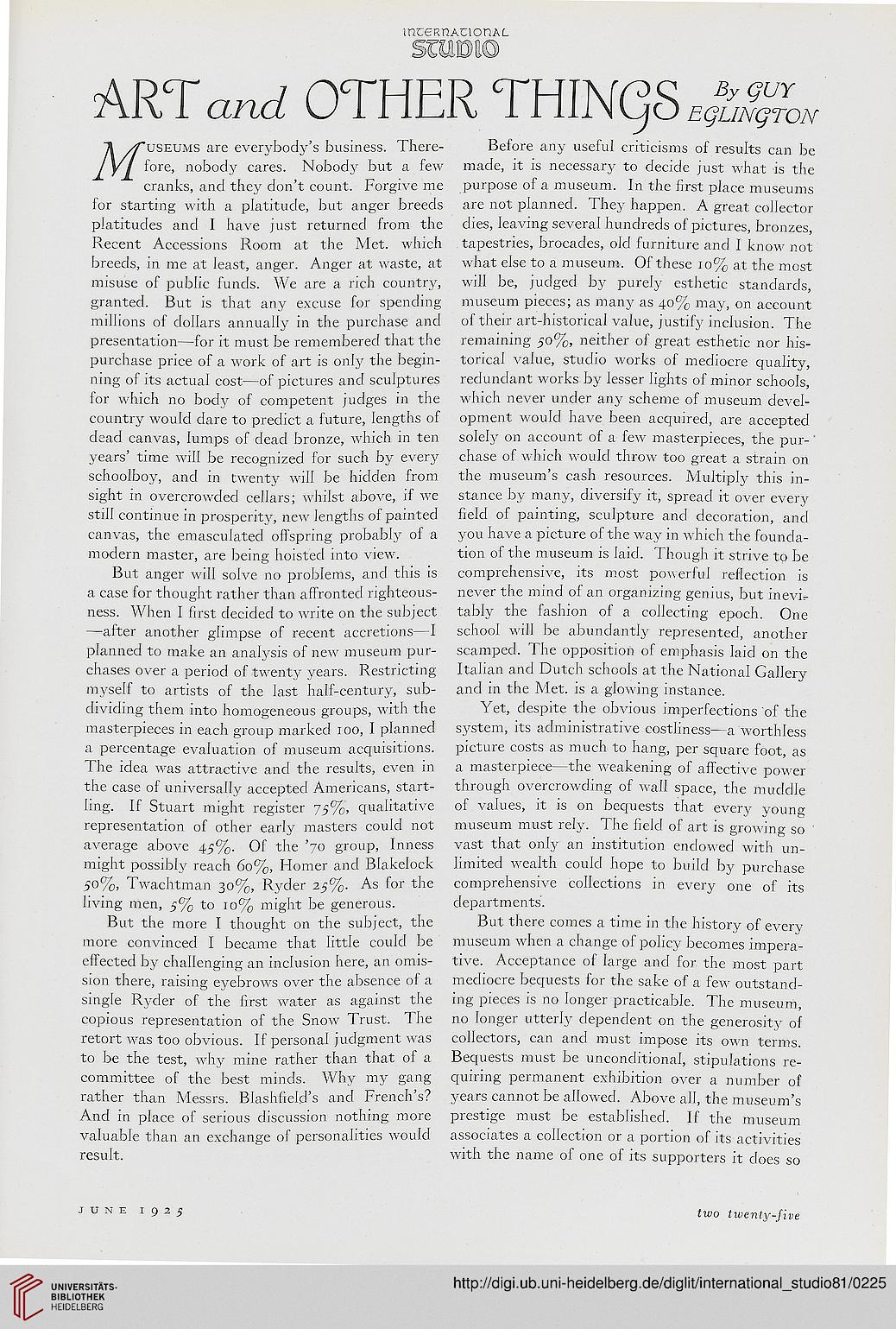 11 -^"useums are everybody's business. There- Before any useful criticisms of results can be
It I ^ore' nobody cares. Nobody but a few made, it is necessary to decide just what is the
cranks, and they don't count. Forgive me purpose of a museum. In the first place museums
for starting with a platitude, but anger breeds are not planned. They happen. A great collector
platitudes and I have just returned from the dies, leaving several hundreds of pictures, bronzes,
Recent Accessions Room at the Met. which tapestries, brocades, old furniture and I know not
breeds, in me at least, anger. Anger at waste, at what else to a museum. Of these 10% at the most
misuse of public funds. We are a rich country, will be, judged by purely esthetic standards,
granted. But is that any excuse for spending museum pieces; as many as 40% may, on account
millions of dollars annually in the purchase and of their art-historical value, justify inclusion. The
presentation—for it must be remembered that the remaining 50%, neither of great esthetic nor his-
purchase price of a work of art is only the begin- torical value, studio works of mediocre quality,
ning of its actual cost—of pictures and sculptures redundant works by lesser lights of minor schools,
for which no body of competent judges in the which never under any scheme of museum devel-
country would dare to predict a future, lengths of opment would have been acquired, are accepted
dead canvas, lumps of dead bronze, which in ten solely on account of a few masterpieces, the pur-
years' time will be recognized for such by every chase of which would throw too great a strain on
schoolboy, and in twenty will be hidden from the museum's cash resources. Multiply this in-
sight in overcrowded cellars; whilst above, if we stance by many, diversify it, spread it over every
still continue in prosperity, newlengths of painted field of painting, sculpture and decoration, and
canvas, the emasculated offspring probably of a you have a picture of the way in which the founda-
modern master, are being hoisted into view. tion of the museum is laid. Though it strive to be
But anger will solve no problems, and this is comprehensive, its most powerful reflection is
a case for thought rather than affronted righteous- never the mind of an organizing genius, but inevt
ness. When I first decided to write on the subject tably the fashion of a collecting epoch. One
—after another glimpse of recent accretions—I school will be abundantly represented, another
planned to make an analysis of new museum pur- scamped. The opposition of emphasis laid on the
chases over a period of twenty years. Restricting Italian and Dutch schools at the National Gallery
myself to artists of the last half-century, sub- and in the Met. is a glowing instance,
dividing them into homogeneous groups, with the Yet, despite the obvious imperfections of the
masterpieces in each group marked 100, I planned system, its administrative costliness—a worthless
a percentage evaluation of museum acquisitions. picture costs as much to hang, per square foot, as
The idea was attractive and the results, even in a masterpiece—the weakening of affective power
the case of universally accepted Americans, start- through overcrowding of wall space, the muddle
ling. If Stuart might register 75%, qualitative of values, it is on bequests that every young
representation of other early masters could not museum must rely. The field of art is growing so
average above 45%. Of the '70 group, Inness vast that only an institution endowed with un-
might possibly reach 60%, Homer and Blakelock limited wealth could hope to build by purchase
50%, Twachtman 30%, Ryder 25%. As for the comprehensive collections in every one of its
living men, 5% to 10% might be generous. departments.

But the more I thought on the subject, the But there comes a time in the history of every
more convinced I became that little could be museum when a change of policy becomes impera-
effected by challenging an inclusion here, an omis- tive. Acceptance of large and for the most part
sion there, raising eyebrows over the absence of a mediocre bequests for the sake of a few outstand-
single Ryder of the first water as against the ing pieces is no longer practicable. The museum,
copious representation of the Snow Trust. The no longer utterly dependent on the generosity of
retort was too obvious. If personal judgment was collectors, can and must impose its own terms,
to be the test, why mine rather than that of a Bequests must be unconditional, stipulations re-
committee of the best minds. Why my gang quiring permanent exhibition over a number of
rather than Messrs. Blashfield's and French's? years cannot be allowed. Above all, the museum's
And in place of serious discussion nothing more prestige must be established. If the museum
valuable than an exchange of personalities would associates a collection or a portion of its activities
result. with the name of one of its supporters it does so