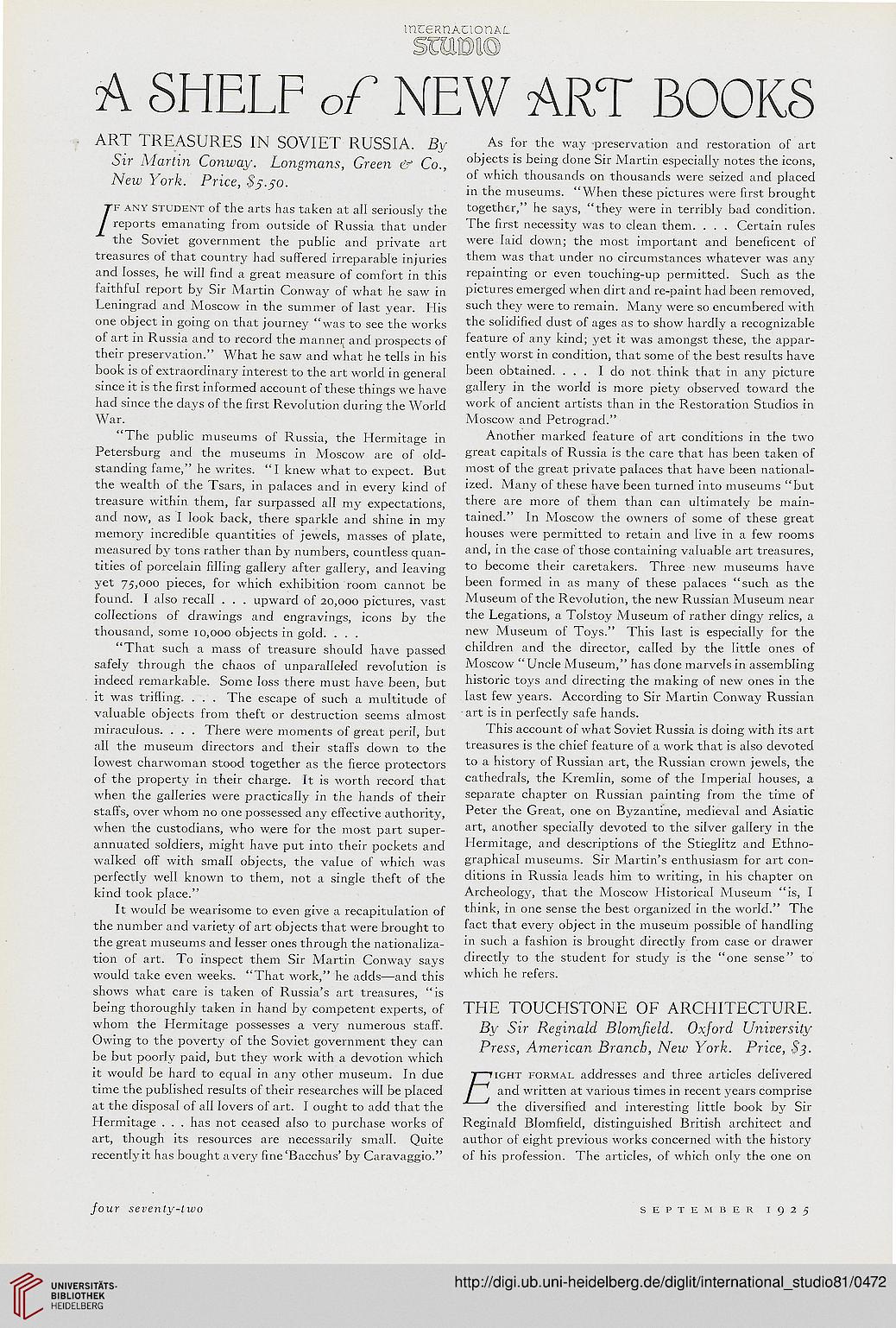 A 8HELP of NEW ART BOOKS

/f any student of the arts has taken at all seriously the
reports emanating from outside of Russia that under
the Soviet government the public and private art
treasures of that country had suffered irreparable injuries
and losses, he will find a great measure of comfort in this
faithful report by Sir Martin Conway of what he saw in
Leningrad and Moscow in the summer of last year. His
one object in going on that journey "was to see the works
of art in Russia and to record the manner and prospects of
their preservation." What he saw and what he tells in his
book is of extraordinary interest to the art world in general
since it is the first informed account of these things we have
had since the days of the first Revolution during the World
War.

"The public museums of Russia, the Hermitage in
Petersburg and the museums in Moscow are of old-
standing fame," he writes. "I knew what to expect. But
the wealth of the Tsars, in palaces and in every kind of
treasure within them, far surpassed all my expectations,
and now, as I look back, there sparkle and shine in my
memory incredible quantities of jewels, masses of plate,
measured by tons rather than by numbers, countless quan-
tities of porcelain filling gallery after gallery, and leaving
yet 75,000 pieces, for which exhibition room cannot be
found. I also recall . . . upward of 20,000 pictures, vast
collections of drawings and engravings, icons by the
thousand, some 10,000 objects in gold. . . .

"That such a mass of treasure should have passed
safely through the chaos of unparalleled revolution is
indeed remarkable. Some loss there must have been, but
it was trifling. . . . The escape of such a multitude of
valuable objects from theft or destruction seems almost
miraculous. . . . There were moments of great peril, but
all the museum directors and their staffs down to the
lowest charwoman stood together as the fierce protectors
of the property in their charge. It is worth record that
when the galleries were practically in the hands of their
staffs, over whom no one possessed any effective authority,
when the custodians, who were for the most part super-
annuated soldiers, might have put into their pockets and
walked off with small objects, the value of which was
perfectly well known to them, not a single theft of the
kind took place."

It would be wearisome to even give a recapitulation of
the number and variety of art objects that were brought to
the great museums and lesser ones through the nationaliza-
tion of art. To inspect them Sir Martin Conway says
would take even weeks. "That work," he adds—and this
shows what care is taken of Russia's art treasures, "is
being thoroughly taken in hand by competent experts, of
whom the Hermitage possesses a very numerous staff.
Owing to the poverty of the Soviet government they can
be but poorly paid, but they work with a devotion which
it would be hard to equal in any other museum. In due
time the published results of their researches will be placed
at the disposal of all lovers of art. I ought to add that the
Hermitage . . . has not ceased also to purchase works of
art, though its resources are necessarily small. Quite
recentlyit has bought avery fine'Bacchus' by Caravaggio."

As for the way preservation and restoration of art
objects is being done Sir Martin especially notes the icons,
of which thousands on thousands were seized and placed
in the museums. "When these pictures were first brought
together," he says, "they were in terribly bad condition.
The first necessity was to clean them. . . . Certain rules
were laid down; the most important and beneficent of
them was that under no circumstances whatever was any
repainting or even touching-up permitted. Such as the
pictures emerged when dirt and re-paint had been removed,
such they were to remain. Many were so encumbered with
the solidified dust of ages as to show hardly a recognizable
feature of any kind; yet it was amongst these, the appar-
ently worst in condition, that some of the best results have
been obtained. ... I do not think that in any picture
gallery in the world is more piety observed toward the
work of ancient artists than in the Restoration Studios in
Moscow and Petrograd."

Another marked feature of art conditions in the two
great capitals of Russia is the care that has been taken of
most of the great private palaces that have been national-
ized. Many of these have been turned into museums "but
there are more of them than can ultimately be main-
tained." In Moscow the owners of some of these great
houses were permitted to retain and live in a few rooms
and, in the case of those containing valuable art treasures,
to become their caretakers. Three new museums have
been formed in as many of these palaces "such as the
Museum of the Revolution, the new Russian Museum near
the Legations, a Tolstoy Museum of rather dingy relics, a
new Museum of Toys." This last is especially for the
children and the director, called by the little ones of
Moscow " Uncle Museum," has done marvels in assembling
historic toys and directing the making of new ones in the
last few years. According to Sir Martin Conway Russian
art is in perfectly safe hands.

This account of what Soviet Russia is doing with its art
treasures is the chief feature of a work that is also devoted
to a history of Russian art, the Russian crown jewels, the
cathedrals, the Kremlin, some of the Imperial houses, a
separate chapter on Russian painting from the time of
Peter the Great, one on Byzantine, medieval and Asiatic
art, another specially devoted to the silver gallery in the
Hermitage, and descriptions of the Sticglitz and Ethno-
graphical museums. Sir Martin's enthusiasm for art con-
ditions in Russia leads him to writing, in his chapter on
Archeology, that the Moscow Historical Museum "is, I
think, in one sense the best organized in the world." The
fact that every object in the museum possible of handling
in such a fashion is brought directly from case or drawer
directly to the student for study is the "one sense" to
which he refers.

THE TOUCHSTONE OF ARCHITECTURE.

I—fight formal addresses and three articles delivered
I and written at various times in recent years comprise
the diversified and interesting little book by Sir
Reginald Blomfield, distinguished British architect and
author of eight previous works concerned with the history
of his profession. The articles, of which only the one on