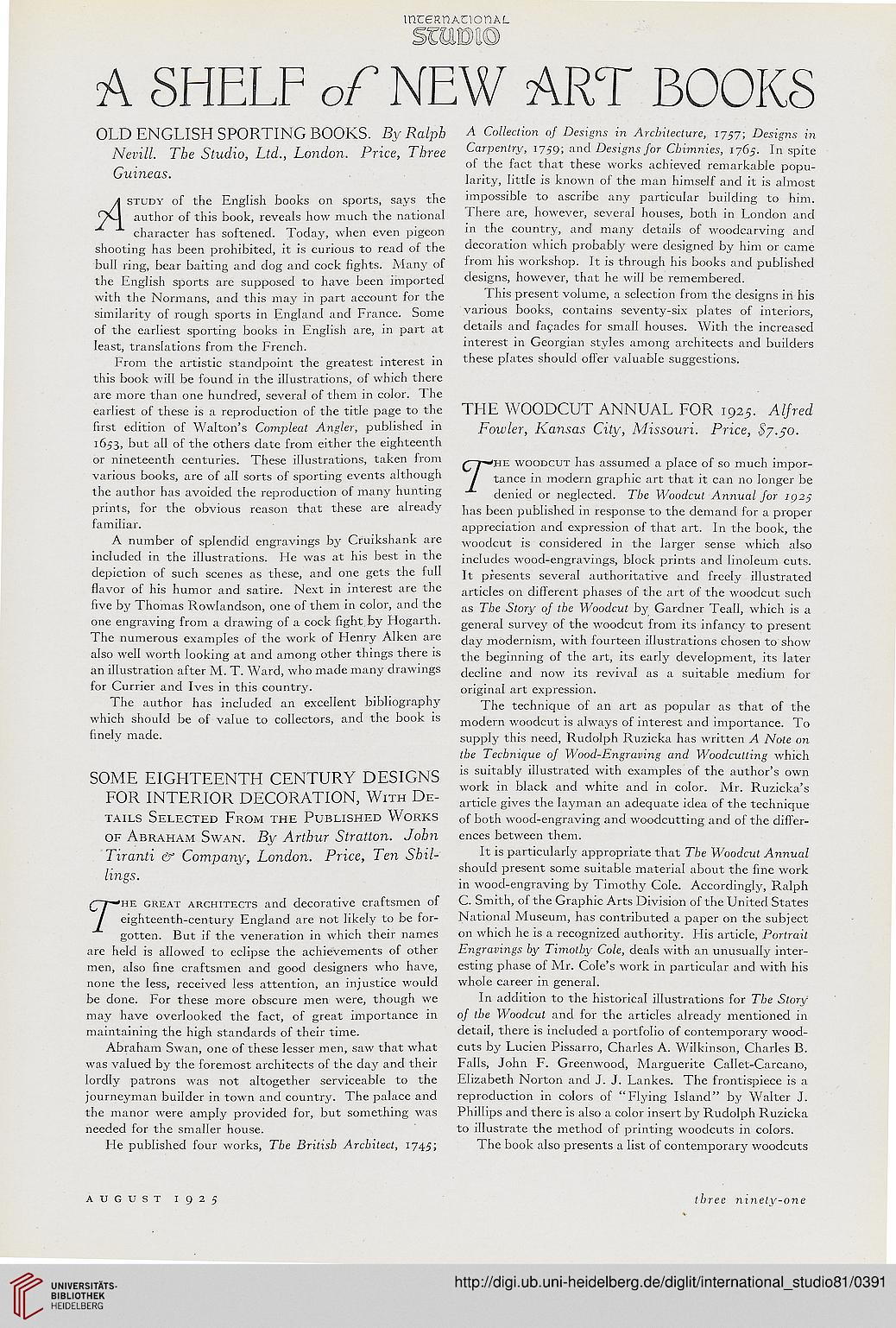 Study of the English books on sports, says the
author of this book, reveals how much the national
character has softened. Today, when even pigeon
shooting has been prohibited, it is curious to read of the
bull ring, bear baiting and dog and cock fights. Many of
the English sports are supposed to have been imported
with the Normans, and this may in part account for the
similarity of rough sports in England and France. Some
of the earliest sporting books in English are, in part at
least, translations from the French.

From the artistic standpoint the greatest interest in
this book will be found in the illustrations, of which there
are more than one hundred, several of them in color. The
earliest of these is a reproduction of the title page to the
first edition of Walton's Compleat Angler, published in
1653, but all of the others date from either the eighteenth
or nineteenth centuries. These illustrations, taken from
various books, are of all sorts of sporting events although
the author has avoided the reproduction of many hunting
prints, for the obvious reason that these are already
familiar.

A number of splendid engravings by Cruikshank are
included in the illustrations. He was at his best in the
depiction of such scenes as these, and one gets the full
flavor of his humor and satire. Next in interest are the
five by Thomas Rowlandson, one of them in color, and the
one engraving from a drawing of a cock fight, by Hogarth.
The numerous examples of the work of Henry Aiken are
also well worth looking at and among other things there is
an illustration after M. T. Ward, who made many drawings
for Currier and Ives in this country.

The author has included an excellent bibliography
which should be of value to collectors, and the book is
finely made.

CJ"'he great architects and decorative craftsmen of
/ eighteenth-century England are not likely to be for-
gotten. But if the veneration in which their names
are held is allowed to eclipse the achievements of other
men, also fine craftsmen and good designers who have,
none the less, received less attention, an injustice would
be done. For these more obscure men were, though we
may have overlooked the fact, of great importance in
maintaining the high standards of their time.

Abraham Swan, one of these lesser men, saw that what
was valued by the foremost architects of the day and their
lordly patrons was not altogether serviceable to the
journeyman builder in town and country. The palace and
the manor were amply provided for, but something was
needed for the smaller house.

A Collection of Designs in Architecture, 1757; Designs in
Carpentry, 1759; and Designs Jor Cbimnies, 1765. In spite
of the fact that these works achieved remarkable popu-
larity, little is known of the man himself and it is almost
impossible to ascribe any particular building to him.
There are, however, several houses, both in London and
in the country, and many details of woodcarving and
decoration which probably were designed by him or came
from his workshop. It is through his books and published
designs, however, that he will be remembered.

This present volume, a selection from the designs in his
various books, contains seventy-six plates of interiors,
details and facades for small houses. With the increased
interest in Georgian styles among architects and builders
these plates should offer valuable suggestions.

C~f*l^ woodcut has assumed a place of so much impor-
/ tance in modern graphic art that it can no longer be
denied or neglected. The Woodcut Annual jor 1925
has been published in response to the demand for a proper
appreciation and expression of that art. In the book, the
woodcut is considered in the larger sense which also
includes wood-engravings, block prints and linoleum cuts.
It presents several authoritative and freely illustrated
articles on different phases of the art of the woodcut such
as The Story of the Woodcut by Gardner Teall, which is a
general survey of the woodcut from its infancy to present
day modernism, with fourteen illustrations chosen to show
the beginning of the art, its early development, its later
decline and now its revival as a suitable medium for
original art expression.

The technique of an art as popular as that of the
modern woodcut is always of interest and importance. To
supply this need, Rudolph Ruzicka has written A Note on
the Technique of Wood-Engraving and Woodcutting which
is suitably illustrated with examples of the author's own
work in black and white and in color. Mr. Ruzicka's
article gives the layman an adequate idea of the technique
of both wood-engraving and woodcutting and of the differ-
ences between them.

It is particularly appropriate that The Woodcut Annual
should present some suitable material about the fine work
in wood-engraving by Timothy Cole. Accordingly, Ralph
C. Smith, of the Graphic Arts Division of the United States
National Museum, has contributed a paper on the subject
on which he is a recognized authority. His article, Portrait
Engravings by Timothy Cole, deals with an unusually inter-
esting phase of Mr. Cole's work in particular and with his
whole career in general.

In addition to the historical illustrations for The Story
0} the Woodcut and for the articles already mentioned in
detail, there is included a portfolio of contemporary wood-
cuts by Lucien Pissarro, Charles A. Wilkinson, Charles B.
Falls, John F. Greenwood, Marguerite Callet-Carcano,
Elizabeth Norton and J. J. Lankes. The frontispiece is a
reproduction in colors of "Flying Island" by Walter J.
Phillips and there is also a color insert by Rudolph Ruzicka
to illustrate the method of printing woodcuts in colors.

The book also presents a list of contemporary woodcuts