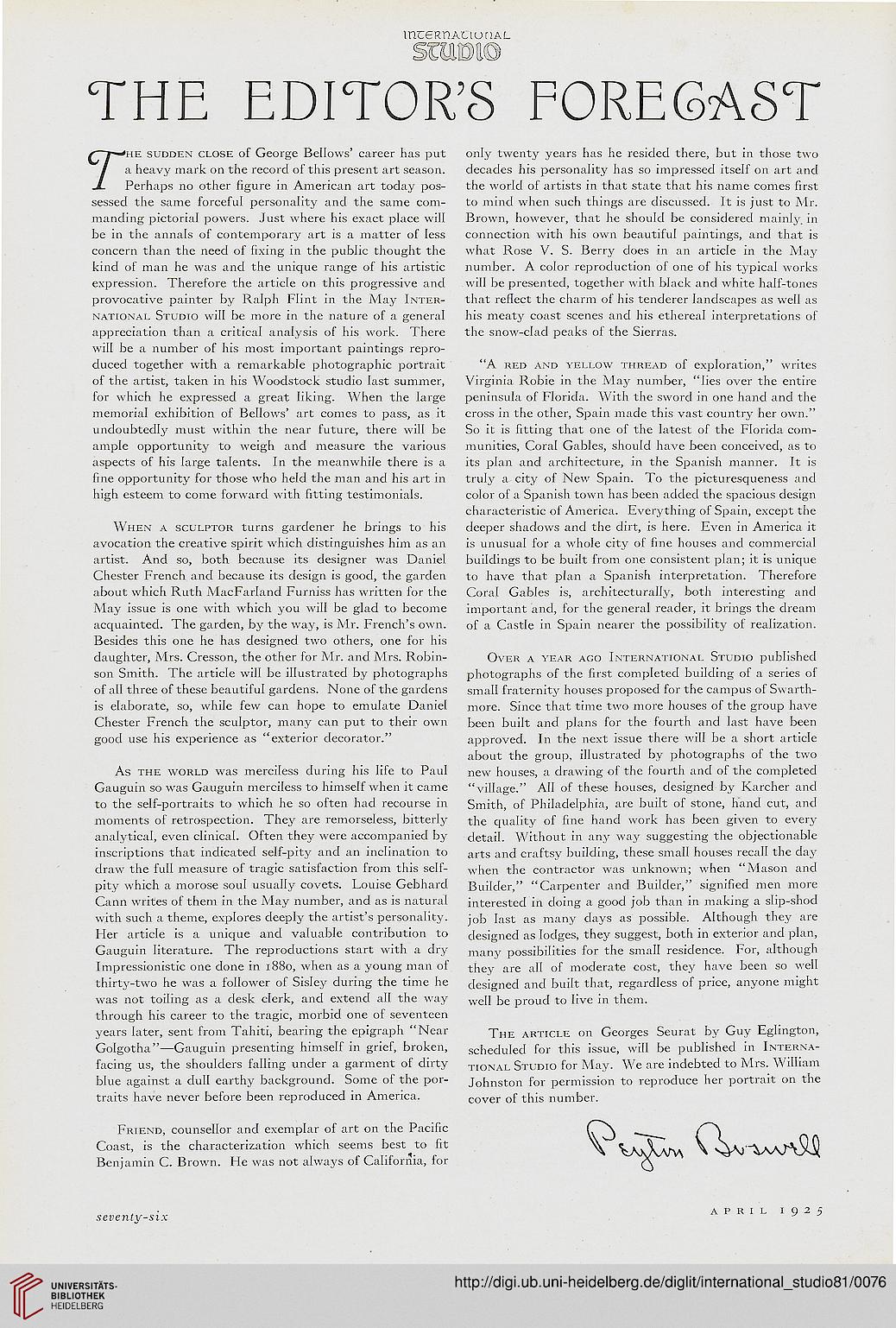 ( 7"he suddex close of George Bellows' career has put
/ a heavy mark on the record of this present art season.
J. Perhaps no other figure in American art today pos-
sessed the same forceful personality and the same com-
manding pictorial powers. Just where his exact place will
be in the annals of contemporary art is a matter of less
concern than the need of fixing in the public thought the
kind of man he was and the unique range of his artistic
expression. Therefore the article on this progressive and
provocative painter by Ralph Flint in the May Inter-
national Studio will be more in the nature of a general
appreciation than a critical analysis of his work. There
will be a number of his most important paintings repro-
duced together with a remarkable photographic portrait
of the artist, taken in his Woodstock studio last summer,
for which he expressed a great liking. When the large
memorial exhibition of Bellows' art comes to pass, as it
undoubtedly must within the near future, there will be
ample opportunity to weigh and measure the various
aspects of his large talents. In the meanwhile there is a
fine opportunity for those who held the man and his art in
high esteem to come forward with fitting testimonials.

When a sculptor turns gardener he brings to his
avocation the creative spirit which distinguishes him as an
artist. And so, both because its designer was Daniel
Chester French and because its design is good, the garden
about which Ruth MacFarland Furniss has written for the
May issue is one with which you will be glad to become
acquainted. The garden, by the way, is Mr. French's own.
Besides this one he has designed two others, one for his
daughter, Mrs. Cresson, the other for Mr. and Mrs. Robin-
son Smith. The article will be illustrated by photographs
of all three of these beautiful gardens. None of the gardens
is elaborate, so, while few can hope to emulate Daniel
Chester French the sculptor, many can put to their own
good use his experience as "exterior decorator."

As the world was merciless during his life to Paul
Gauguin so was Gauguin merciless to himself when it came
to the self-portraits to which he so olten had recourse in
moments of retrospection. They are remorseless, bitterly
analytical, even clinical. Often they were accompanied by
inscriptions that indicated self-pity and an inclination to
draw the full measure of tragic satisfaction from this self-
pity which a morose soul usually covets. Louise Gebhard
Cann writes of them in the May number, and as is natural
with such a theme, explores deeply the artist's personality.
Her article is a unique and valuable contribution to
Gauguin literature. The reproductions start with a dry
Impressionistic one done in 1880, when as a young man of
thirty-two he was a follower of Sisley during the time he
was not toiling as a desk clerk, and extend all the way
through his career to the tragic, morbid one of seventeen
years later, sent from Tahiti, bearing the epigraph "Near
Golgotha"—Gauguin presenting himself in grief, broken,
facing us, the shoulders falling under a garment of dirty
blue against a dull earthy background. Some of the por-
traits have never before been reproduced in America.

Friend, counsellor and exemplar of art on the Pacific
Coast, is the characterization which seems best to fit
Benjamin C. Brown. He was not always of California, for

only twenty years has he resided there, but in those two
decades his personality has so impressed itself on art and
the world of artists in that state that his name comes first
to mind when such things are discussed. It is just to Mr.
Brown, however, that he should be considered mainly, in
connection with his own beautiful paintings, and that is
what Rose V. S. Berry does in an article in the May
number. A color reproduction of one of his typical works
will be presented, together with black and white half-tones
that reflect the charm of his tenderer landscapes as well as
his meaty coast scenes and his ethereal interpretations of
the snow-clad peaks of the Sierras.

"A red and yellow thread of exploration," writes
Virginia Robie in the May number, "lies over the entire
peninsula of Florida. With the sword in one hand and the
cross in the other, Spain made this vast country her own."
So it is fitting that one of the latest of the Florida com-
munities, Coral Gables, should have been conceived, as to
its plan and architecture, in the Spanish manner. It is
truly a city of New Spain. To the picturesqueness and
color of a Spanish town has been added the spacious design
characteristic of America. Everything of Spain, except the
deeper shadows and the dirt, is here. Even in America it
is unusual for a whole city of fine houses and commercial
buildings to be built from one consistent plan; it is unique
to have that plan a Spanish interpretation. Therefore
Coral Gables is, architecturally, both interesting and
important and, for the general reader, it brings the dream
of a Castle in Spain nearer the possibility of realization.

Over a year ago International Studio published
photographs of the first completed building of a series of
small fraternity houses proposed for the campus of Swarth-
more. Since that time two more houses of the group have
been built and plans for the fourth and last have been
approved. In the next issue there will be a short article
about the group, illustrated by photographs of the two
new houses, a drawing of the fourth and of the completed
"village." All of these houses, designed by Karcher and
Smith, of Philadelphia, are built of stone, hand cut, and
the quality of fine hand work has been given to every
detail. Without in any way suggesting the objectionable
arts and craftsy building, these small houses recall the day
when the contractor was unknown; when "Mason and
Builder," "Carpenter and Builder," signified men more
interested in doing a good job than in making a slip-shod
job last as many days as possible. Although they are
designed as lodges, they suggest, both in exterior and plan,
many possibilities for the small residence. For, although
they are all of moderate cost, they have been so well
designed and built that, regardless of price, anyone might
well be proud to live in them.

The article on Georges Seurat by Guy Eglington,
scheduled for this issue, will be published in Interna-
tional Studio for May. We are indebted to Mrs. William
Johnston for permission to reproduce her portrait on the
cover of this number.