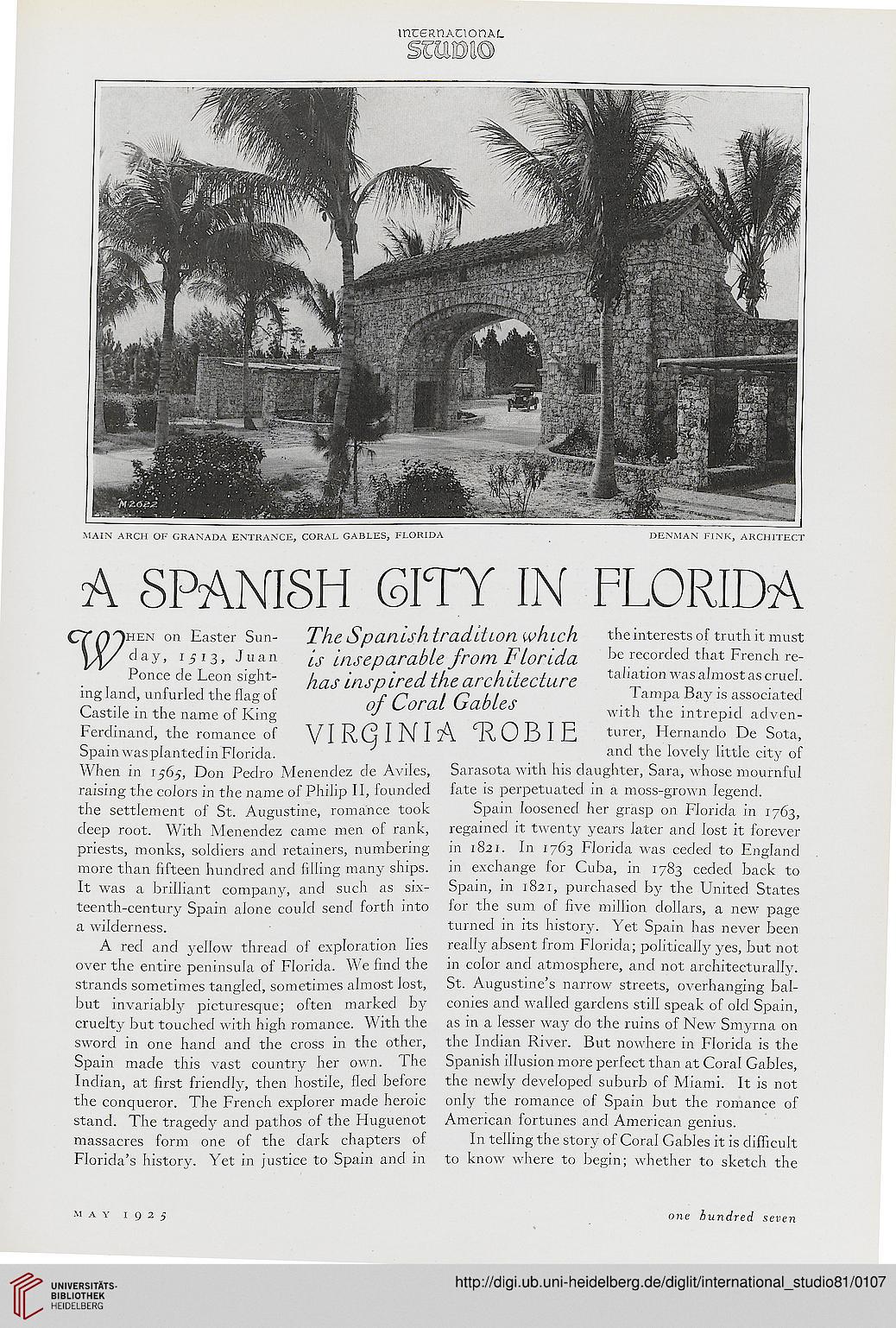 A SPANISH GITY IN FLORIDA

Cr/I^KEN on Easter Sun- The S'panlsh tradition which the interests of truth it must
\Y/ day, i 5 i 3 , J u a n [s Inseparable from Florida hc recorded that French re-
Ponce de Leon sight- has inspired the architecture ^Iiatzon was almost as cruel

Castile in the name of King V ^ ■ with tIle intrepid adven-
Ferdinand, the romance of VIRGINIA *R 0 B I E turer> Hernando De Sota,

When in 1565, Don Pedro Menendez de Aviles, Sarasota with his daughter, Sara, whose mournful

raising the colors in the name of Philip II, founded fate is perpetuated in a moss-grown legend,

the settlement of St. Augustine, romance took Spain loosened her grasp on Florida in 1763,

priests, monks, soldiers and retainers, numbering in 1821. In 1763 Florida was ceded to England

more than fifteen hundred and filling many ships, in exchange for Cuba, in 1783 ceded back to

It was a brilliant company, and such as six- Spain, in 182r, purchased by the United States

teenth-century Spain alone could send forth into for the sum of five million dollars, a new page

a wilderness. turned in its history. Yet Spain has never been

A red and yellow thread of exploration lies really absent from Florida; politically yes, but not

over the entire peninsula of Florida. We find the in color and atmosphere, and not architecturally,

cruelty but touched with high romance. With the as in a lesser way do the ruins of New Smyrna on

sword in one hand and the cross in the other, the Indian River. But nowhere in Florida is the

Spain made this vast country her own. The Spanish illusion more perfect than at Coral Gables,

Indian, at first friendly, then hostile, fled before the newly developed suburb of Miami. It is not

stand. The tragedy and pathos of the Huguenot American fortunes and American genius,

Florida's history. Yet in justice to Spain and in to know where to begin; whether to sketch the