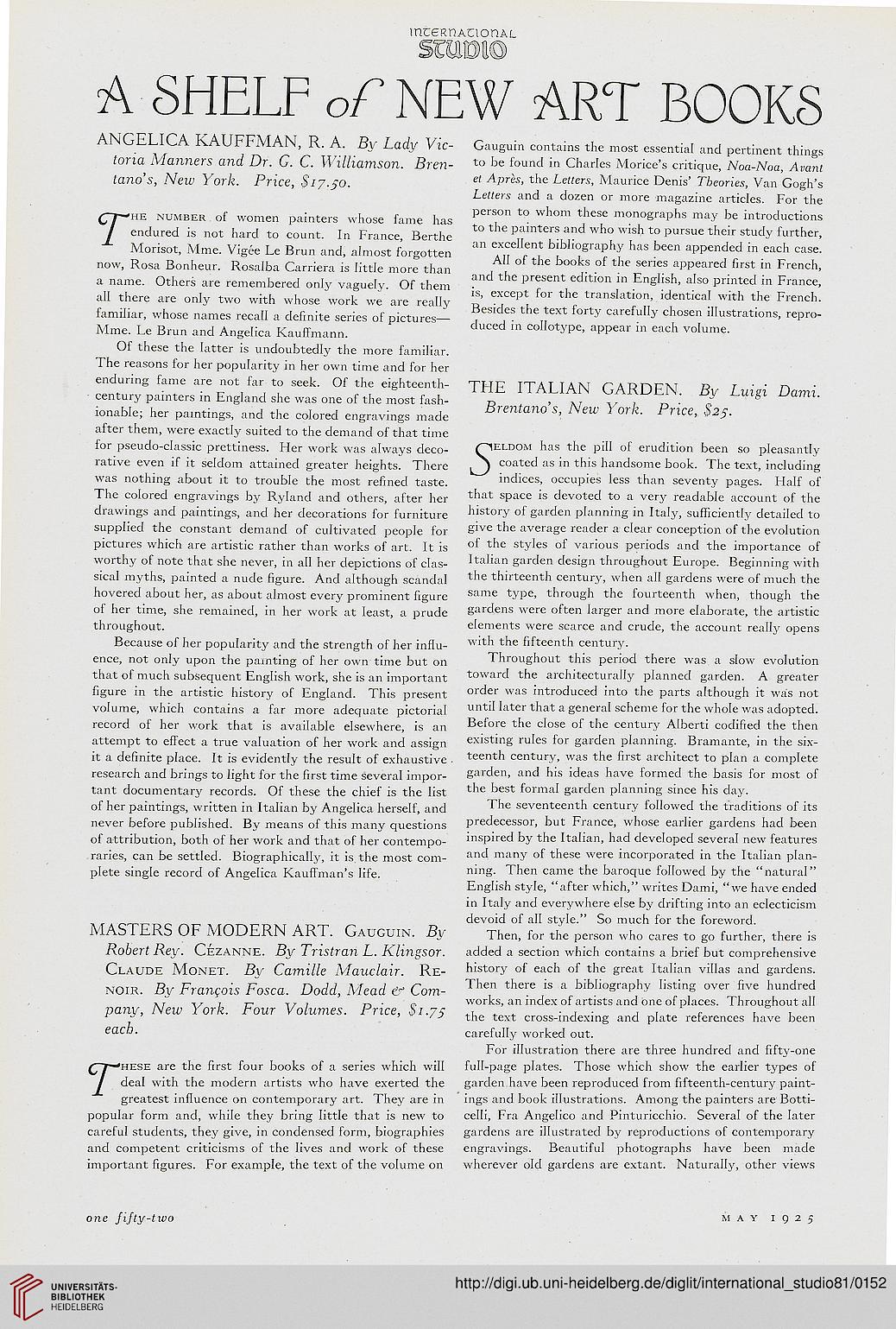 rhe number of women painters whose fame has
endured is not hard to count. In France, Berthe
Morisot, Mine. Vigee Le Brun and, almost forgotten
now, Rosa Bonheur. Rosalba Camera is little more than
a name. Others are remembered only vaguely. Of them
all there are only two with whose work we are really
familiar, whose names recall a definite series of pictures—
Mme. Le Brun and Angelica Kauffmann.

Of these the latter is undoubtedly the more familiar.
The reasons for her popularity in her own time and for her
enduring fame are not far to seek. Of the eighteenth-
century painters in England she was one of the most fash-
ionable; her paintings, and the colored engravings made
after them, were exactly suited to the demand of that time
for pseudo-classic prettiness. Her work was always deco-
rative even if it seldom attained greater heights. There
was nothing about it to trouble the most refined taste.
The colored engravings by Ryland and others, after her
drawings and paintings, and her decorations for furniture
supplied the constant demand of cultivated people for
pictures which are artistic rather than works of art. It is
worthy of note that she never, in all her depictions of clas-
sical myths, painted a nude figure. And although scandal
hovered about her, as about almost every prominent figure
of her time, she remained, in her work at least, a prude
throughout.

Because of her popularity and the strength of her influ-
ence, not only upon the painting of her own time but on
that of much subsequent English work, she is an important
figure in the artistic history of England. This present
volume, which contains a far more adequate pictorial
record of her work that is available elsewhere, is an
attempt to effect a true valuation of her work and assign
it a definite place. It is evidently the result of exhaustive
research and brings to light for the first time several impor-
tant documentary records. Of these the chief is the list
of her paintings, written in Italian by Angelica herself, and
never before published. By means of this many questions
of attribution, both of her work and that of her contempo-
raries, can be settled. Biographically, it is the most com-
plete single record of Angelica Kauffman's life.

(~r~'hese are the first four books of a series which will
/ deal with the modern artists who have exerted the
greatest influence on contemporary art. They are in
popular form and, while they bring little that is new to
careful students, they give, in condensed form, biographies
and competent criticisms of the lives and work of these
important figures. For example, the text of the volume on

Gauguin contains the most essential and pertinent things
to be found in Charles Morice's critique, Noa-Noa, Avant
et Aprils, the Letters, Maurice Denis' Theories, Van Gogh's
Letters and a dozen or more magazine articles. For the
person to whom these monographs may be introductions
to the painters and who wish to pursue their study further,
an excellent bibliography has been appended in each case.

All of the books of the series appeared first in French,
and the present edition in English, also printed in France,
is, except for the translation, identical with the French.
Besides the text forty carefully chosen illustrations, repro-
duced in collotype, appear in each volume.

("Seldom has the pill of erudition been so pleasantly
^ coated as in this handsome book. The text, including
indices, occupies less than seventy pages. Half of
that space is devoted to a very readable account of the
history of garden planning in Italy, sufficiently detailed to
give the average reader a clear conception of the evolution
of the styles of various periods and the importance of
Italian garden design throughout Europe. Beginning with
the thirteenth century, when all gardens were of much the
same type, through the fourteenth when, though the
gardens were often larger and more elaborate, the artistic
elements were scarce and crude, the account really opens
with the fifteenth century.

Throughout this period there was a slow evolution
toward the architecturally planned garden. A greater
order was introduced into the parts although it was not
until later that a general scheme for the whole was adopted.
Before the close of the century Alberti codified the then
existing rules for garden planning. Bramante, in the six-
teenth century, was the first architect to plan a complete
garden, and his ideas have formed the basis for most of
the best formal garden planning since his day.

The seventeenth century followed the traditions of its
predecessor, but France, whose earlier gardens had been
inspired by the Italian, had developed several new features
and many of these were incorporated in the Italian plan-
ning. Then came the baroque followed by the "natural"
English style, "after which," writes Dami, "we have ended
in Italy and everywhere else by drifting into an eclecticism
devoid of all style." So much for the foreword.

Then, for the person who cares to go further, there is
added a section which contains a brief but comprehensive
history of each of the great Italian villas and gardens.
Then there is a bibliography listing over five hundred
works, an index of artists and one of places. Throughout all
the text cross-indexing and plate references have been
carefully worked out.

For illustration there are three hundred and fifty-one
full-page plates. Those which show the earlier types of
garden have been reproduced from fifteenth-century paint-
ings and book illustrations. Among the painters are Botti-
celli, Fra Angelico and Pinturicchio. Several of the later
gardens are illustrated by reproductions of contemporary
engravings. Beautiful photographs have been made
wherever old gardens are extant. Naturally, other views