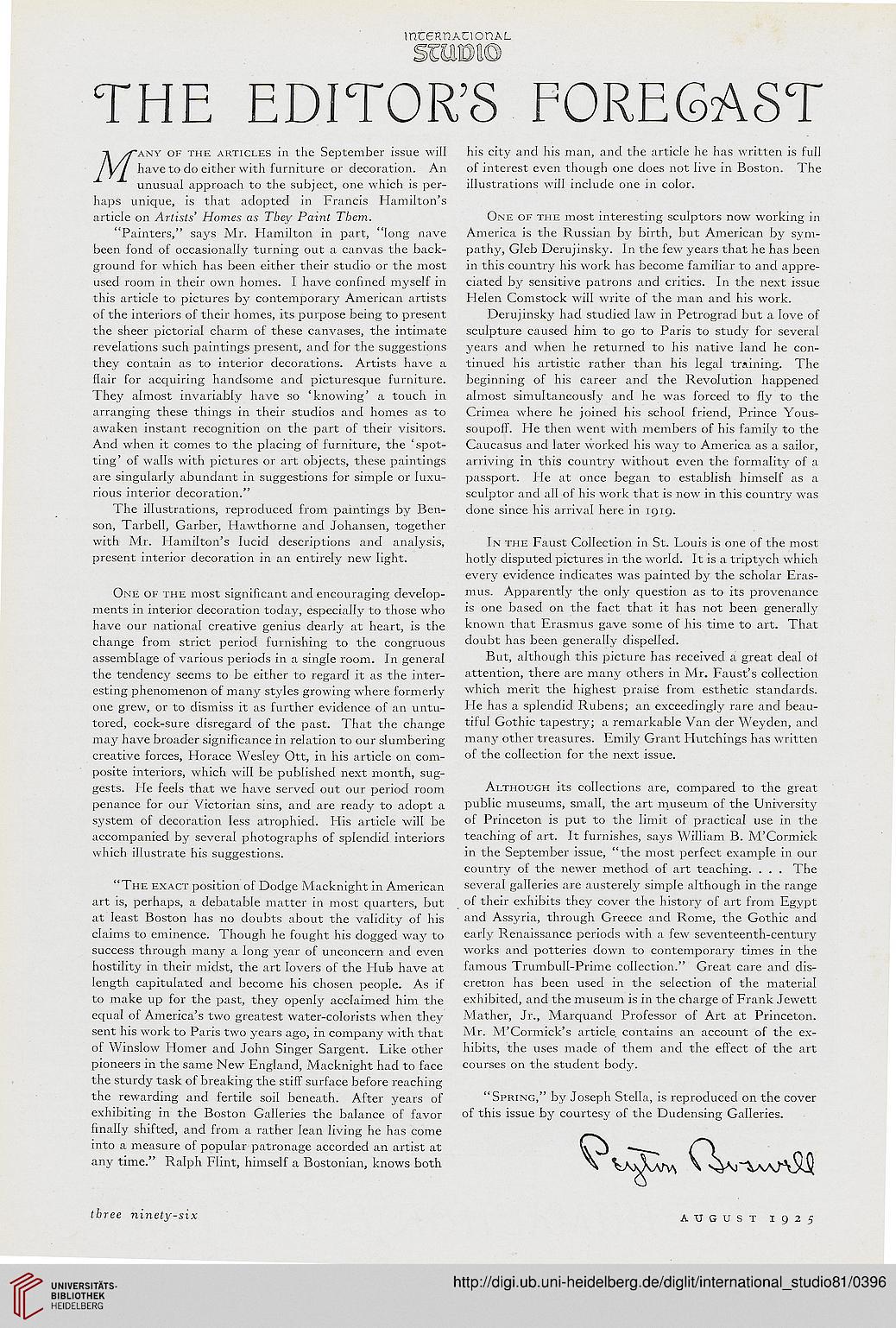 any of the articles in the September issue will his city and his man, and the article he has written is full

have to do either with furniture or decoration. An of interest even though one does not live in Boston. The

unusual approach to the subject, one which is per- illustrations will include one in color,
haps unique, is that adopted in Francis Hamilton's

article on Artists' Homes as They Paint Them. One of the most interesting sculptors now working in

"Painters," says Mr. Hamilton in part, "long nave America is the Russian by birth, but American by sym-

been fond of occasionally turning out a canvas the back- pathy, Gleb Derujinsky. In the few years that he has been

used room in their own homes. I have confined myself in ciated by sensitive patrons and critics. In the next issue

this article to pictures by contemporary American artists Helen Comstock will write of the man and his work,

of the interiors of their homes, its purpose being to present Derujinsky had studied law in Petrograd but a love of

the sheer pictorial charm of these canvases, the intimate sculpture caused him to go to Paris to study for several

revelations such paintings present, and for the suggestions years and when he returned to his native land he con-

they contain as to interior decorations. Artists have a tinued his artistic rather than his legal training. The

flair for acquiring handsome and picturesque furniture. beginning of his career and the Revolution happened

arranging these things in their studios and homes as to Crimea where he joined his school friend, Prince Yous-

awaken instant recognition on the part of their visitors. soupoff. He then went with members of his family to the

And when it comes to the placing of furniture, the 'spot- Caucasus and later worked his way to America as a sailor,

ting' of walls with pictures or art objects, these paintings arriving in this country without even the formality of a

are singularly abundant in suggestions for simple or Iuxu- passport. He at once began to establish himself as a

rious interior decoration." sculptor and all of his work that is now in this country was

The illustrations, reproduced from paintings by Ben- done since his arrival here in 1919.
son, Tarbell, Garber, Hawthorne and Johansen, together

with Mr. Hamilton's lucid descriptions and analysis, In the Faust Collection in St. Louis is one of the most

present interior decoration in an entirely new light. hotly disputed pictures in the world. It is a triptych which

every evidence indicates was painted by the scholar Eras-

One of the most significant and encouraging develop- mus. Apparently the only question as to its provenance

ments in interior decoration today, especially to those who is one based on the fact that it has not been generally

have our national creative genius dearly at heart, is the known that Erasmus gave some of his time to art. That

change from strict period furnishing to the congruous doubt has been generally dispelled.

assemblage of various periods in a single room. In general But, although this picture has received a great deal of
the tendency seems to be either to regard it as the inter- attention, there are many others in Mr. Faust's collection
esting phenomenon of many styles growing where formerly which merit the highest praise from esthetic standards,
one grew, or to dismiss it as further evidence of an untu- He has a splendid Rubens; an exceedingly rare and beau-
tored, cock-sure disregard of the past. That the change tiful Gothic tapestry; a remarkable Van der Weyden, and
may have broader significance in relation to our slumbering many other treasures. Emily Grant Hutchings has written
creative forces, Horace Wesley Ott, in his article on com- of the collection for the next issue,
posite interiors, which will be published next month, sug-
gests. He feels that we have served out our period room Although its collections are, compared to the great
penance for our Victorian sins, and are ready to adopt a public museums, small, the art museum of the University
system of decoration less atrophied. His article will be of Princeton is put to the limit of practical use in the
accompanied by several photographs of splendid interiors teaching of art. It furnishes, says William B. M'Cormick
which illustrate his suggestions. in the September issue, "the most perfect example in our

country of the newer method of art teaching. . . . The

art is, perhaps, a debatable matter in most quarters, but of their exhibits they cover the history of art from Egypt

at least Boston has no doubts about the validity of his and Assyria, through Greece and Rome, the Gothic and

claims to eminence. Though he fought his dogged way to early Renaissance periods with a few seventeenth-century

hostility in their midst, the art lovers of the Hub have at famous TrumbuH-Prime collection." Great care and dis-

Iength capitulated and become his chosen people. As if cretion has been used in the selection of the material

to make up for the past, they openly acclaimed him the exhibited, and the museum is in the charge of Frank Jewett

equal of America's two greatest water-colorists when they Mather, Jr., Marquand Professor of Art at Princeton,

sent his work to Paris two years ago, in company with that Mr. M'Cormick's article contains an account of the ex-

of Winslow Homer and John Singer Sargent. Like other hibits, the uses made of them and the effect of the art

pioneers in the same New England, Macknight had to face courses on the student body,
the sturdy task of breaking the stiff surface before reaching

the rewarding and fertile soil beneath. After years of " Spring," by Joseph Stella, is reproduced on the cover

exhibiting in the Boston Galleries the balance of favor of this issue by courtesy of the Dudensing Galleries,
finally shifted, and from a rather lean living he has come
into a measure of popular patronage accorded an artist at
any time." Ralph Flint, himself a Bostonian, knows both