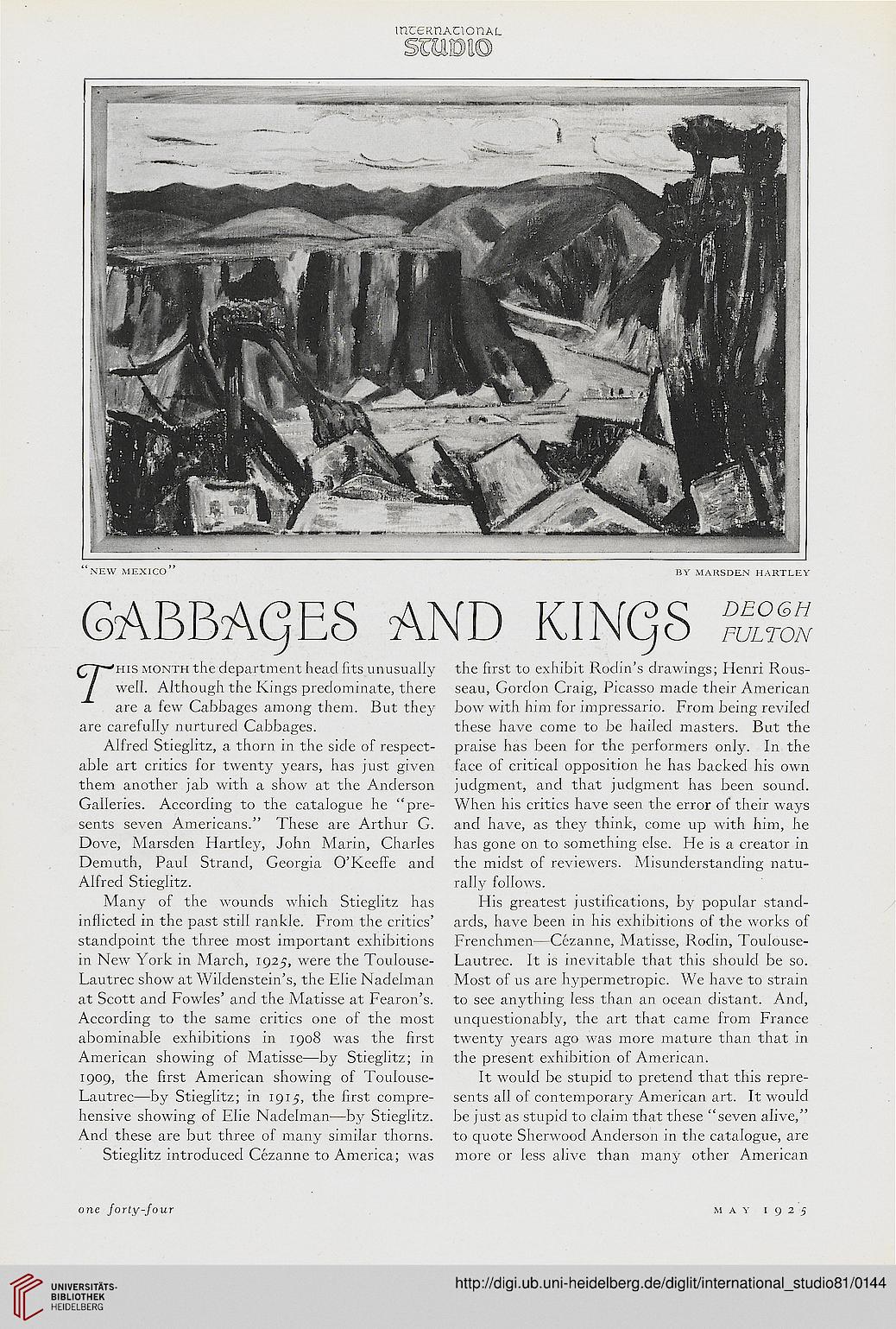 well. Although the Kings predominate, there seau, Gordon Craig, Picasso made their American

are a few Cabbages among them. But they bow with him for impressario. From being reviled

are carefully nurtured Cabbages. these have come to be hailed masters. But the

Alfred Stieglitz, a thorn in the side of respect- praise has been for the performers only. In the

able art critics for twenty years, has just given face of critical opposition he has backed his own

them another jab with a show at the Anderson judgment, and that judgment has been sound.

Galleries. According to the catalogue he "pre- When his critics have seen the error of their ways

sents seven Americans." These are Arthur G. and have, as they think, come up with him, he

Dove, Marsden Hartley, John Marin, Charles has gone on to something else. He is a creator in

Many of the wounds which Stieglitz lias His greatest justifications, by popular stand-
inflicted in the past still rankle. From the critics' ards, have been in his exhibitions of the works of
standpoint the three most important exhibitions Frenchmen—Cezanne, Matisse, Rodin, Toulouse-
in New York in March, 1925, were the Toulouse- Lautrec. It is inevitable that this should be so.
Lautrec show at Wildenstein's, the Elie Nadelman Most of us are hypermetropic. We have to strain
at Scott and Fowles' and the Matisse at Fearon's. to see anything less than an ocean distant. And,
According to the same critics one of the most unquestionably, the art that came from France
abominable exhibitions in 1908 was the first twenty years ago was more mature than that in
American showing of Matisse—by Stieglitz; in the present exhibition of American.
1909, the first American showing of Toulouse- It would be stupid to pretend that this repre-
Lautrec—by Stieglitz; in 1915, the first compre- sents all of contemporary American art. It would
hensive showing of Ehe Nadelman—by Stieglitz. be just as stupid to claim that these "seven alive,"
And these are but three of many similar thorns, to quote Sherwood Anderson in the catalogue, are
Stieglitz introduced Cezanne to America; was more or less alive than many other American