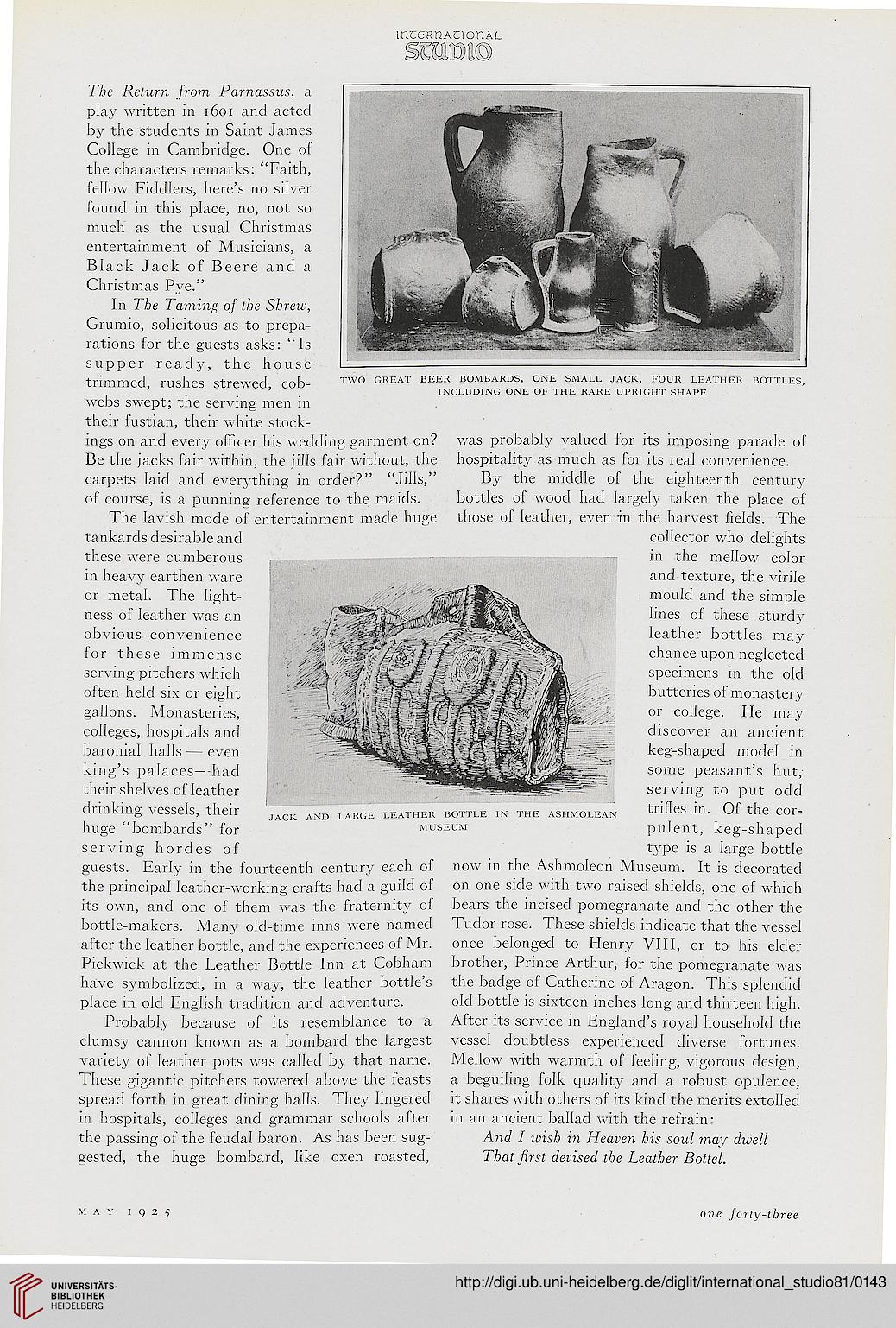 The Return from Parnassus, a
play written in 1601 and acted
by the students in Saint James
College in Cambridge. One of
the characters remarks: "Faith,
fellow Fiddlers, here's no silver
found in this place, no, not so
much as the usual Christmas
entertainment of Musicians, a
Black Jack of Beere and a
Christmas Pye."

In The Taming of the Shrew,
Grumio, solicitous as to prepa-
rations for the guests asks: "Is
supper ready, the house
trimmed rushes strewerl rob- two great beer bombards, one small jack, four leather bottles,
uimmcu, iusncs strewed, coo including one of the rare upright shape

webs swept; the serving men in
their fustian, their white stock-
ings on and every officer his wedding garment on? was probably valued for its imposing parade of
Be the jacks fair within, the jills fair without, the hospitality as much as for its real convenience,
carpets laid and everything in order?" "Jills," By the middle of the eighteenth century

of course, is a punning reference to the maids. bottles of wood had largely taken the place of

The lavish mode of entertainment made huge those of leather, even in the harvest fields. The
tankards desirable and collector who delights

t In so were cumberous iwmaaBH^UKBS^M^BSBWBBBHUBUSSBt in the mellow
in heavy earthen ware ana" texture, the virile

ness of leather was an •.^^^M^K lines of tIlese sturdy

for these immense ' chiuice^iipon neglected

guests. Early in the fourteenth century each of now in the Ashmoleon Museum. It is decorated

the principal leather-working crafts had a guild of on one side with two raised shields, one of which

its own, and one of them was the fraternity of bears the incised pomegranate and the other the

bottle-makers. Many old-time inns were named Tudor rose. These shields indicate that the vessel

after the leather bottle, and the experiences of Mr. once belonged to Henry VIII, or to his elder

Pickwick at the Leather Bottle Inn at Cobham brother, Prince Arthur, for the pomegranate was

have symbolized, in a way, the leather bottle's the badge of Catherine of Aragon. This splendid

variety of leather pots was called by that name. Mellow with warmth of feeling, vigorous design,

These gigantic pitchers towered above the feasts a beguiling folk quality and a robust opulence,

spread forth in great dining halls. They lingered it shares with others of its kind the merits extolled

in hospitals, colleges and grammar schools after in an ancient ballad with the refrain:

the passing of the feudal baron. As has been sug- And I wish in Heaven his soul may dwell

gested, the huge bombard, like oxen roasted, That first devised the Leather Bottel.