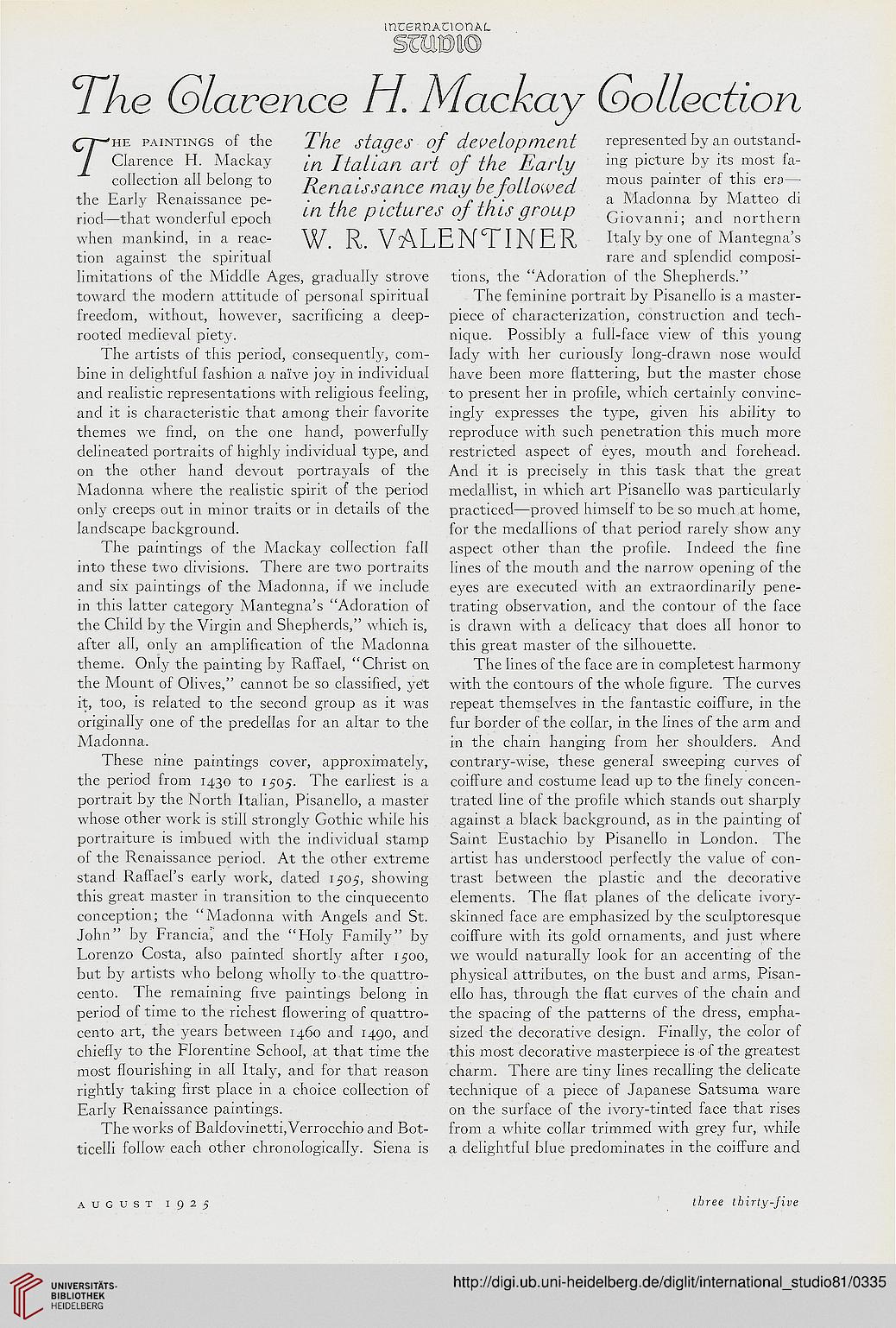 when mankind, in a reac- "V ALE IS[ T I N E R Italy by one of Mantegna's
tion against the spiritual rare and splendid composi-
Iimitations of the Middle Ages, gradually strove tions, the "Adoration of the Shepherds."
toward the modern attitude of personal spiritual The feminine portrait by Pisanello is a master-
freedom, without, however, sacrificing a deep- piece of characterization, construction and tech-
rooted medieval piety. nique. Possibly a full-face view of this young

The artists of this period, consequently, com- lady with her curiously long-drawn nose would

bine in delightful fashion a na'ive joy in individual have been more flattering, but the master chose

and realistic representations with religious feeling, to present her in profile, which certainly convinc-

and it is characteristic that among their favorite ingly expresses the type, given his ability to

themes we find, on the one hand, powerfully reproduce with such penetration this much more

Madonna where the realistic spirit of the period medallist, in which art Pisanello was particularly

only creeps out in minor traits or in details of the practiced—proved himself to be so much at home,

landscape background. for the medallions of that period rarely show any

The paintings of the Mackay collection fall aspect other than the profile. Indeed the fine

into these two divisions. There are two portraits lines of the mouth and the narrow opening of the

and six paintings of the Madonna, if we include eyes are executed with an extraordinarily pene-

m this latter category Mantegna's "Adoration of trating observation, and the contour of the face

the Child by the Virgin and Shepherds," which is, is drawn with a delicacy that does all honor to

after all, only an amplification of the Madonna this great master of the silhouette,

theme. Only the painting by Raffael, "Christ on The lines of the face are in completest harmony

the Mount of Olives," cannot be so classified, yet with the contours of the whole figure. The curves

it, too, is related to the second group as it was repeat themselves in the fantastic coiffure, in the

originally one of the predeffas for an altar to the fur border of the collar, in the lines of the arm and

Madonna. in the chain hanging from her shoulders. And

These nine paintings cover, approximately, contrary-wise, these general sweeping curves of
the period from 1430 to 1505. The earliest is a coiffure and costume lead up to the finely concen-
portrait by the North Italian, Pisanello, a master trated line of the profile which stands out sharply
whose other work is still strongly Gothic while his against a black background, as in the painting of
portraiture is imbued with the individual stamp Saint Eustachio by Pisanello in London. The
of the Renaissance period. At the other extreme artist has understood perfectly the value of con-
stand Raffael's early work, dated 1505, showing trast between the plastic and the decorative
this great master in transition to the cinquecento elements. The flat planes of the delicate ivory-
conception; the "Madonna with Angels and St. skinned face are emphasized by the sculptoresque
John" by Francia, and the "Holy Family" by coiffure with its gold ornaments, and just where
Lorenzo Costa, also painted shortly after 1500, we would naturally look for an accenting of the
but by artists who belong wholly to-the quattro- physical attributes, on the bust and arms, Pisan-
cento. The remaining five paintings belong in ello has, through the flat curves of the chain and
period of time to the richest flowering of quattro- the spacing of the patterns of the dress, empha-
cento art, the years between 1460 and 1490, and sized the decorative design. Finally, the color of
chiefly to the Florentine School, at that time the this most decorative masterpiece is of the greatest
most flourishing in all Italy, and for that reason charm. There are tiny lines recalling the delicate
rightly taking first place in a choice collection of technique of a piece of Japanese Satsuma ware
Early Renaissance paintings. on the surface of the ivory-tinted face that rises

The works of Baldovinetti.Verrocchio and Bot- from a white collar trimmed with grey fur, while

ticelli follow each other chronologically. Siena is a delightful blue predominates in the coiffure and