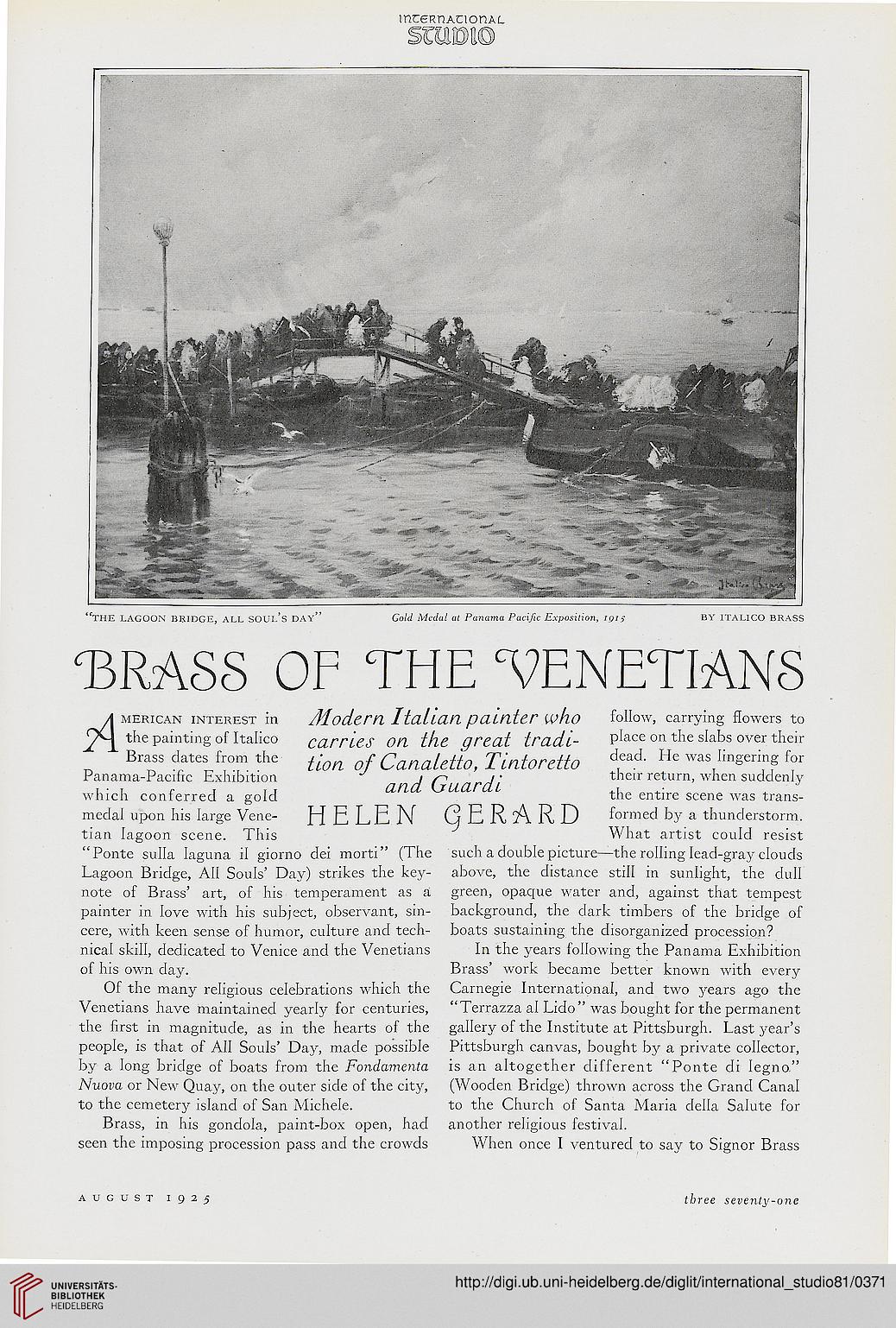 "BRASS OF THE VENETIANS

the painting of Italico
Brass dates from the
Panama-Pacific Exhibition
which conferred a gold
medal upon his large Vene-
tian lagoon scene. This
"Ponte sulla Iaguna il giorno dei morti" (The
Lagoon Bridge, All Souls' Day) strikes the key-
note of Brass' art, of his temperament as a
painter in love with his subject, observant, sin-
cere, with keen sense of humor, culture and tech-
nical skill, dedicated to Venice and the Venetians
of his own day.

Of the many religious celebrations which the
Venetians have maintained yearly for centuries,
the first in magnitude, as in the hearts of the
people, is that of All Souls' Day, made possible
by a long bridge of boats from the Fondamenta
Nuova or New Quay, on the outer side of the city,
to the cemetery island of San Michele.

Brass, in his gondola, paint-box open, had
seen the imposing procession pass and the crowds

follow, carrying flowers to
place on the slabs over their
dead. He was lingering for
their return, when suddenly
the entire scene was trans-
formed by a thunderstorm.
What artist could resist
such a double picture—the rolling lead-gray clouds
above, the distance still in sunlight, the dull
green, opaque water and, against that tempest
background, the dark timbers of the bridge of
boats sustaining the disorganized procession?

In the years following the Panama Exhibition
Brass' work became better known with every
Carnegie International, and two years ago the
"Terrazza al Lido" was bought for the permanent
gallery of the Institute at Pittsburgh. Last year's
Pittsburgh canvas, bought by a private collector,
is an altogether different "Ponte di Iegno"
(Wooden Bridge) thrown across the Grand Canal
to the Church of Santa Maria della Salute for
another religious festival.

When once I ventured to say to Signor Brass

Modern Italian painter who
carries on the great tradi-
tion of Canaietto, Tintoretto
and Guardi