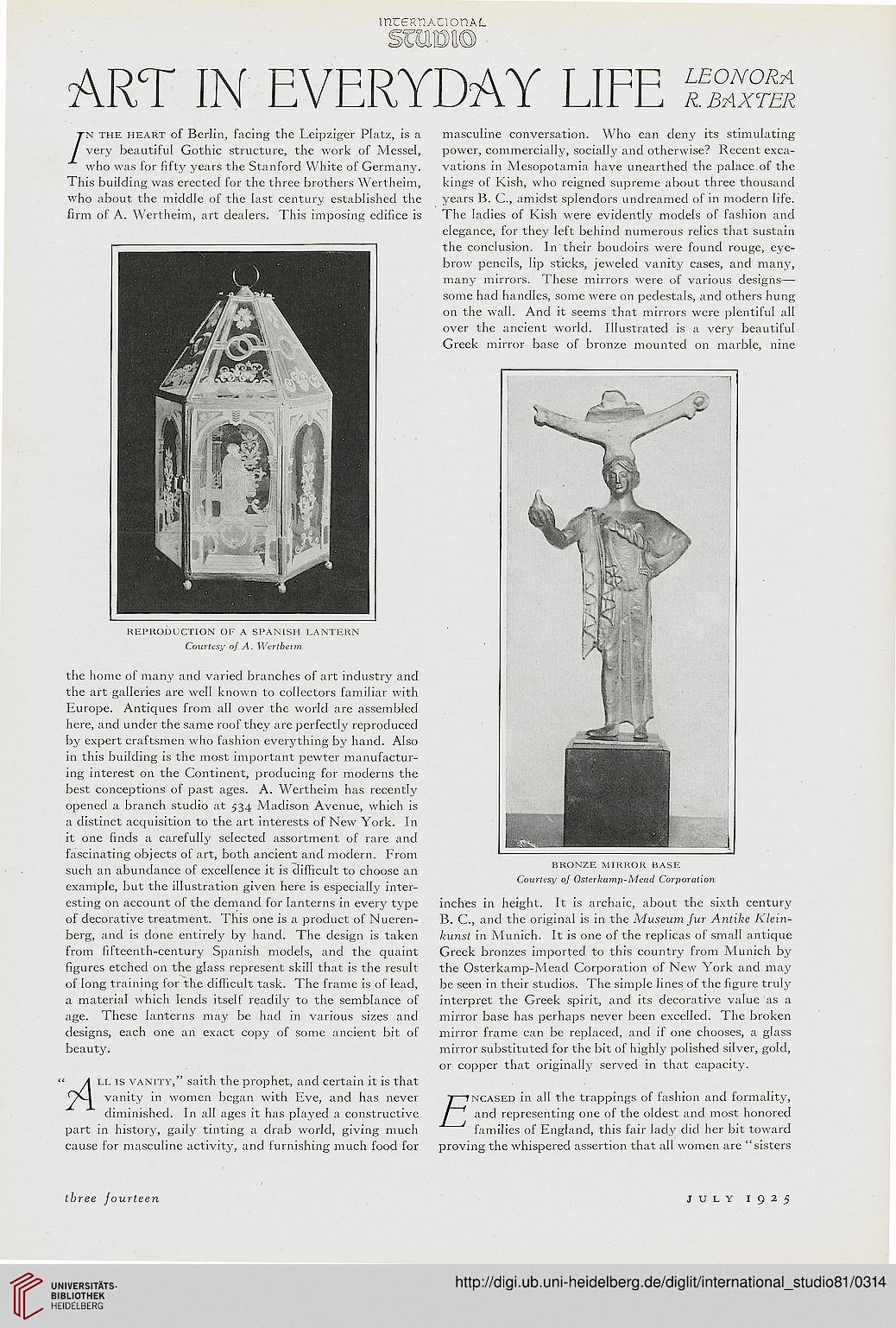 /n the heart of Berlin, facing the Leipziger Platz, is a masculine conversation. Who can deny its stimulating
very beautiful Gothic structure, the work of Messel, power, commercially, socially and otherwise? Recent exca-
who was for fifty years the Stanford White of Germany. vations in Mesopotamia have unearthed the palace.of the
This building was erected for the three brothers Wertheim, kings of Kish, who reigned supreme about three thousand
who about the middle of the last century established the years B. C., amidst splendors undreamed of in modern life,
firm of A. Wertheim, art dealers. This imposing edifice is The ladies of Kish were evidently models of fashion and

elegance, for they left behind numerous relics that sustain
the conclusion. In their boudoirs were found rouge, eye-
brow pencils, lip sticks, jeweled vanity cases, and many,
many mirrors. These mirrors were of various designs—
some had handles, some were on pedestals, and others hung
on the wall. And it seems that mirrors were plentiful all
over the ancient world. Illustrated is a very beautiful
Greek mirror base of bronze mounted on marble, nine

reproduction of a spanish lantern
Courtesy of A. Wertheim

the home of many and varied branches of art industry and
the art galleries are well known to collectors familiar with
Europe. Antiques from all over the world are assembled
here, and under the same roof they a re perfectly reproduced
by expert craftsmen who fashion everything by hand. Also
in this building is the most important pewter manufactur-
ing interest on the Continent, producing for moderns the
best conceptions of past ages. A. Wertheim has recently
opened a branch studio at 534 Madison Avenue, which is
a distinct acquisition to the art interests of New York. In
it one finds a carefully selected assortment of rare and
fascinating objects of art, both ancient and modern. From
such an abundance of excellence it is difficult to choose an
example, but the illustration given here is especially inter-
esting on account of the demand for lanterns in every type inches in height. It is archaic, about the sixth century
of decorative treatment. This one is a product of Nueren- B. C, and the original is in the Museum Jur Antike Klein-
berg, and is done entirely by hand. The design is taken kunst in Munich. It is one of the replicas of small antique
from fifteenth-century Spanish models, and the quaint Greek bronzes imported to this country from Munich by
figures etched on the glass represent skill that is the result the Osterkamp-Mead Corporation of New York and may
of long training for the difficult task. The frame is of lead, be seen in their studios. The simple lines of the figure truly
a material which lends itself readily to the semblance of interpret the Greek spirit, and its decorative value as a
age. These lanterns may be had in various sizes and mirror base has perhaps never been excelled. The broken
designs, each one an exact copy of some ancient bit of mirror frame can be replaced, and if one chooses, a glass
beauty. mirror substituted for the bit of highly polished silver, gold,

or copper that originally served in that capacity.

A ll is vanity," saith the prophet, and certain it is that

vanity in women began with Eve, and has never ~j—tncased in all the trappings of fashion and formality,
diminished. In all ages it has played a constructive / and representing one of the oldest and most honored
part in history, gaily tinting a drab world, giving much families of England, this fair lady did her bit toward

cause for masculine activity, and furnishing much food for proving the whispered assertion that all women are "sisters