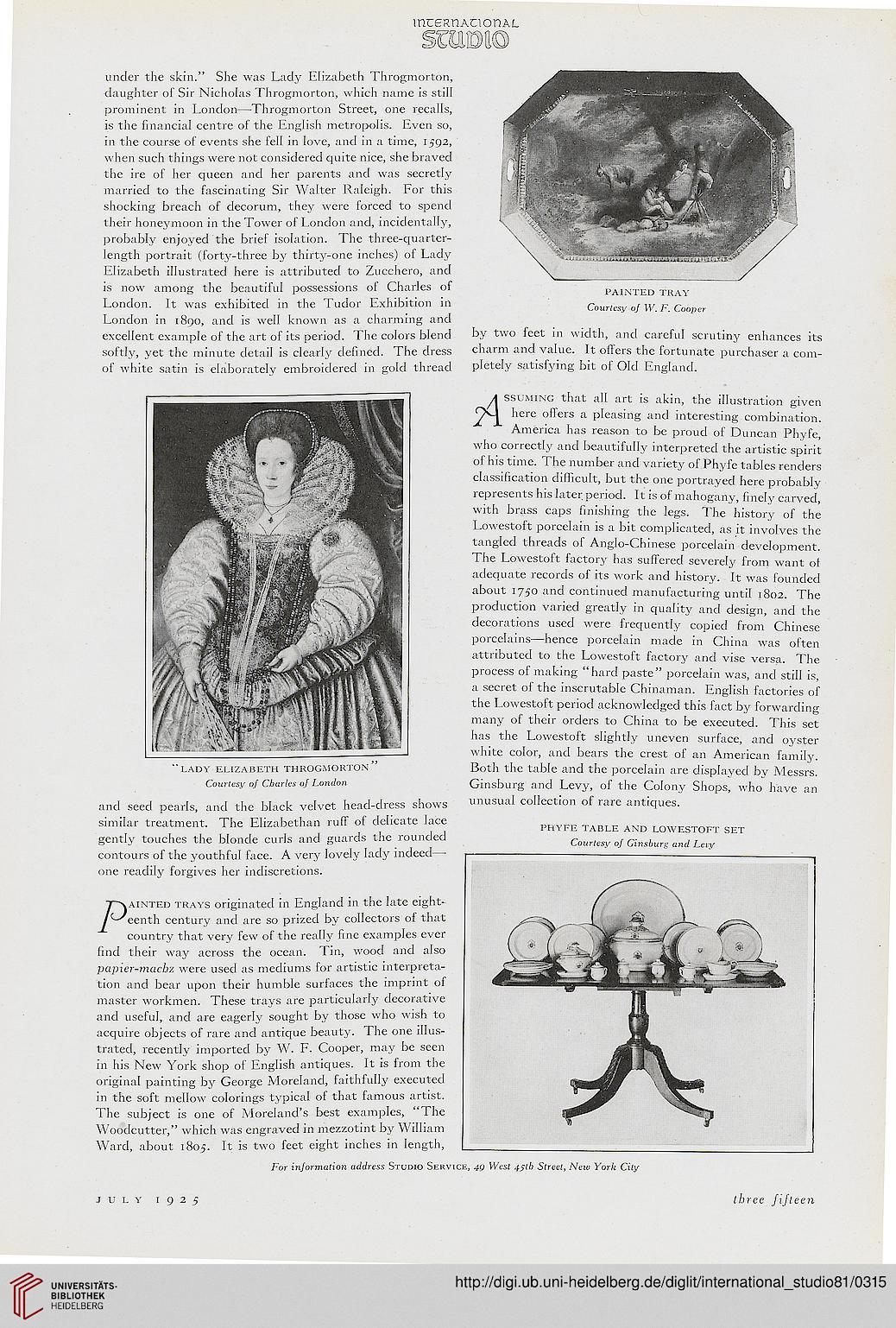 under the skin." She was Lady Elizabeth Throgmorton,
daughter of Sir Nicholas Throgmorton, which name is still
prominent in London—Throgmorton Street, one recalls,
is the financial centre of the English metropolis. Even so,
in the course of events she fell in love, and in a time, 1592,
when such things were not considered quite nice, she braved
the ire of her queen and her parents and was secretly
married to the fascinating Sir Walter Raleigh. For this
shocking breach of decorum, they were forced to spend
their honeymoon in the Tower of London and, incidentally,
probably enjoyed the brief isolation. The three-quarter-
length portrait (forty-three by thirty-one inches) of Lady
Elizabeth illustrated here is attributed to Zucchero, and
is now among the beautiful possessions of Charles of
London. It was exhibited in the Tudor Exhibition in
London in 1890, and is well known as a charming and
excellent example of the art of its period. The colors blend
softly, yet the minute detail is clearly defined. The dress
of white satin is elaborately embroidered in gold thread

and seed pearls, and the black velvet head-dress shows
similar treatment. The Elizabethan ruff of delicate lace
gently touches the blonde curls and guards the rounded
contours of the youthful face. A very lovely lady indeed—■
one readily forgives her indiscretions.

T~^\ ainted trays originated in England in the late eight-
/^eenth century and are so prized by collectors of that
country that very few of the really fine examples ever
find their way across the ocean. Tin, wood and also
papier-tnacbz were used as mediums for artistic interpreta-
tion and bear upon their humble surfaces the imprint of
master workmen. These trays are particularly decorative
and useful, and are eagerly sought by those who wish to
acquire objects of rare and antique beauty. The one illus-
trated, recently imported by W. F. Cooper, may be seen
in his New York shop of English antiques. It is from the
original painting by George Moreland, faithfully executed
in the soft mellow colorings typical of that famous artist.
The subject is one of Moreland's best examples, "The
Woodcutter," which was engraved in mezzotint by William
Ward, about 1805. It is two feet eight inches in length,

by two feet in width, and careful scrutiny enhances its
charm and value. It offers the fortunate purchaser a com-
pletely satisfying bit of Old England.

A ssuming that all art is akin, the illustration given
0*4 here offers a pleasing and interesting combination.

America has reason to be proud of Duncan Phyfe,
who correctly and beautifully interpreted the artistic spirit
of his time. The number and variety of Phyfe tables renders
classification difficult, but the one portrayed here probably
represents his later period. It is of mahogany, finely carved,
with brass caps finishing the legs. The history of the
Lowestoft porcelain is a bit complicated, as it involves the
tangled threads of Anglo-Chinese porcelain development.
The Lowestoft factory has suffered severely from want ot
adequate records of its work and history. It was founded
about 1750 and continued manufacturing until 1802. The
production varied greatly in quality and design, and the
decorations used were frequently copied from Chinese
porcelains—hence porcelain made in China was often
attributed to the Lowestoft factory and vise versa. The
process of making "hard paste" porcelain was, and still is,
a secret of the inscrutable Chinaman. English factories of
the Lowestoft period acknowledged this fact by forwarding
many of their orders to China to be executed. This set
has the Lowestoft slightly uneven surface, and oyster
white color, and bears the crest of an American family.
Both the table and the porcelain are displayed by Messrs.
Ginsburg and Levy, of the Colony Shops, who have an
unusual collection of rare antiques.