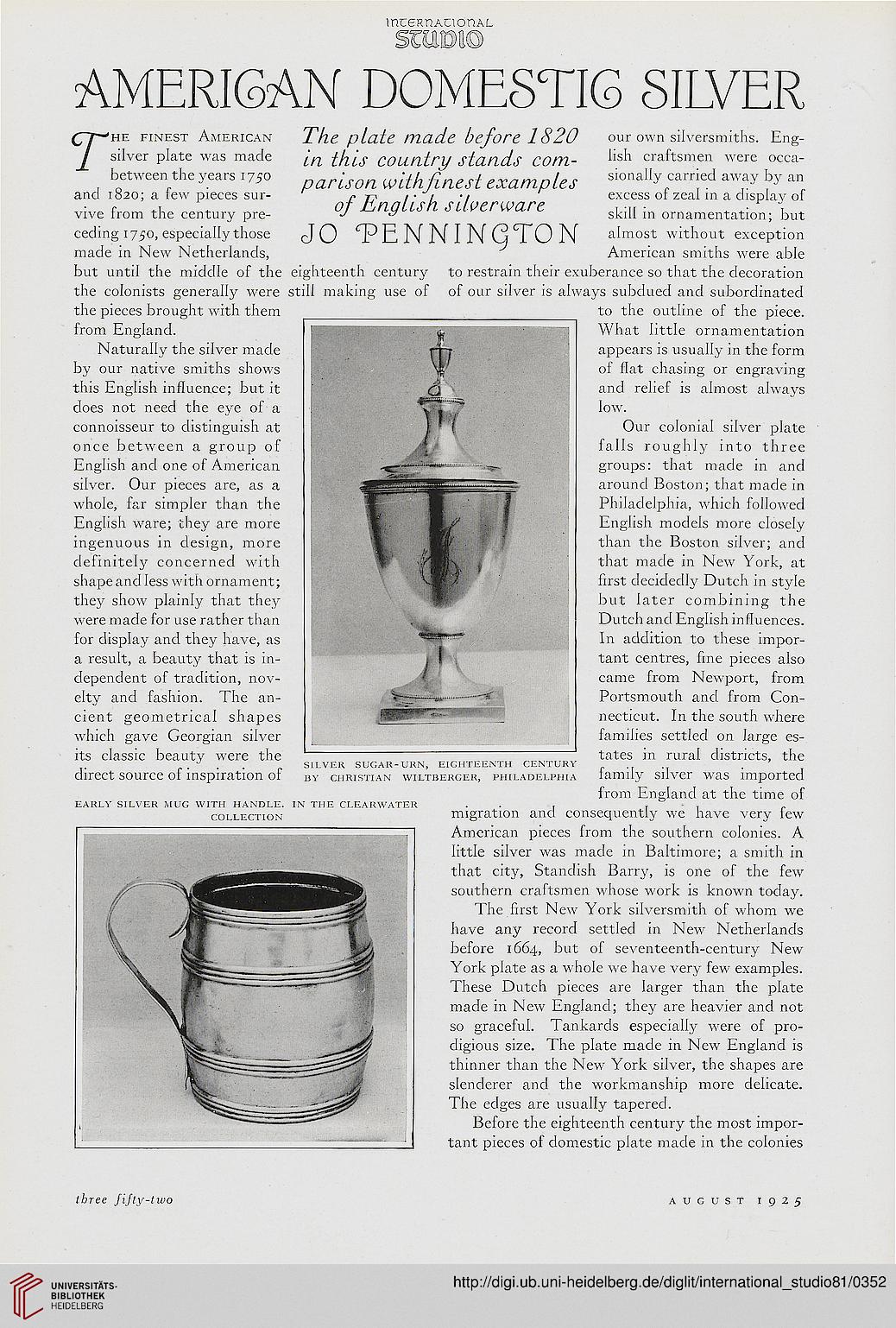 rhe finest American The plate made before 1820 our own silversmiths. Eng-

vive from the century pre- -> & skill in ornamentation; but

ceding 1750, especially those cJ 0 E iNf Isf I In G TO 1ST almost without exception
made in New Netherlands, American smiths were able

the pieces brought with them__ to the outline of the piece.

Naturally the silver made
by our native smiths shows
this English influence; but it
does not need the eye of a
connoisseur to distinguish at
once between a group of
English and one of American
silver. Our pieces are, as a
whole, far simpler than the
English ware; they are more
ingenuous in design, more
definitely concerned with
shape and less with ornament;
they show plainly that they
were made for use rather than
for display and they have, as
a result, a beauty that is in-
dependent of tradition, nov-
elty and fashion. The an-
cient geometrical shapes
which gave Georgian silver
its classic beauty were the

appears is usually in the form
of flat chasing or engraving
and relief is almost always
low.

Our colonial silver plate
falls roughly into three
groups: that made in and
around Boston; that made in
Philadelphia, which followed
English models more closely
than the Boston silver; and
that made in New York, at
first decidedly Dutch in style
but later combining the
Dutch and English influences.
In addition to these impor-
tant centres, fine pieces also
came from Newport, from
Portsmouth and from Con-
necticut. In the south where
families settled on large es-
tates in rural districts, the

from England at the time of

early silver mug with handle. in the clearwater

migration and consequently we have very few
American pieces from the southern colonies. A
little silver was made in Baltimore; a smith in
that city, Standish Barry, is one of the few
southern craftsmen whose work is known today.

The first New York silversmith of whom we
have any record settled in New Netherlands
before 1664, but of seventeenth-century New
York plate as a whole we have very few examples.
These Dutch pieces are larger than the plate
made in New England; they are heavier and not
so graceful. Tankards especially were of pro-
digious size. The plate made in New England is
thinner than the New York silver, the shapes are
slenderer and the workmanship more delicate.
The edges are usually tapered.