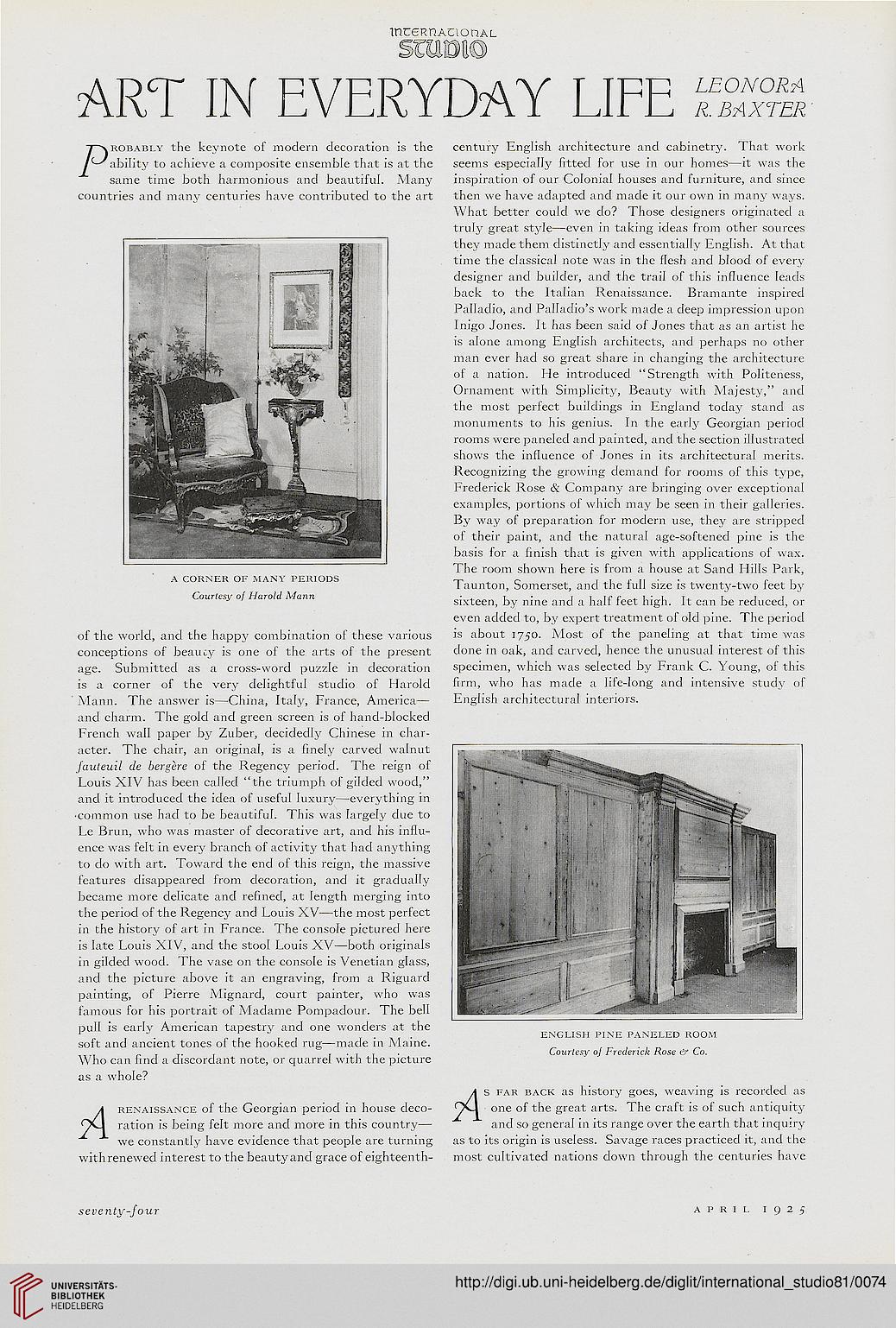 a corner of many periods
Courtesy of Harold Mann

Probably the keynote of modern decoration is the century English architecture and cabinetry. That work
ability to achieve a composite ensemble that is at the seems especially fitted for use in our homes—it was the
same time both harmonious and beautiful. Many inspiration of our Colonial houses and furniture, and since
countries and many centuries have contributed to the art then we have adapted and made it our own in many ways.

What better could we do? Those designers originated a
truly great style—even in taking ideas from other sources
they made them distinctly and essentially English. At that
time the classical note was in the flesh and blood of every
designer and builder, and the trail of this influence leads
back to the Italian Renaissance. Bramante inspired
Palladio, and Palladio's work made a deep impression upon
Inigo Jones. It has been said of Jones that as an artist he
is alone among English architects, and perhaps no other
man ever had so great share in changing the architecture
of a nation. He introduced "Strength with Politeness,
Ornament with Simplicity, Beauty with Majesty," and
the most perfect buildings in England today stand as
monuments to his genius. In the early Georgian period
rooms were paneled and painted, and the section illustrated
shows the influence of Jones in its architectural merits.
Recognizing the growing demand for rooms of this type,
Frederick Rose & Company are bringing over exceptional
examples, portions of which may be seen in their galleries.
By way of preparation for modern use, they are stripped
of their paint, and the natural age-softened pine is the
basis for a finish that is given with applications of wax.
The room shown here is from a house at Sand Hills Park,
Taunton, Somerset, and the lull size is twenty-two feet by
sixteen, by nine and a half feet high. It can be reduced, or
even added to, by expert treatment of old pine. The period
of the world, and the happy combination of these various is about 1750. Most of the paneling at that time was
conceptions of beaucy is one of the arts of the present done in oak, and carved, hence the unusual interest of this
age. Submitted as a cross-word puzzle in decoration specimen, which was selected by Frank C. Young, of this
is a corner of the very delightful studio of Harold firm, who has made a life-long and intensive study of
' Mann. The answer is—China, Italy, France, America— English architectural interiors,
and charm. The gold and green screen is of hand-blocked
French wall paper by Zuber, decidedly Chinese in char-
acter. The chair, an original, is a finely carved walnut
Jauteuil de bergire of the Regency period. The reign of
Louis XIV has been called "the triumph of gilded wood,"
and it introduced the idea of useful luxury—everything in
• common use had to be beautiful. This was largely due to
Le Brun, who was master of decorative art, and his influ-
ence was felt in every branch of activity that had anything
to do with art. Toward the end of this reign, the massive
features disappeared from decoration, and it gradually
became more delicate and refined, at length merging into
the period of the Regency and Louis XV—the most perfect
in the history of art in France. The console pictured here
is late Louis XIV, and the stool Louis XV—both originals
in gilded wood. The vase on the console is Venetian glass,
and the picture above it an engraving, from a Riguard
painting, of Pierre A'lignard, court painter, who was
famous for his portrait of Madame Pompadour. The bell
pull is early American tapestry and one wonders at the
soft and ancient tones of the hooked rug—made in Maine.
Who can find a discordant note, or quarrel with the picture
as a whole?

A renaissance of the Georgian period in house deco- OCJ one oi the great arts. The craft is of such antiquity
OsJ ration is being felt more and more in this country— and so general in its range over the earth that inquiry

we constantly have evidence that people are turning as to its origin is useless. Savage races practiced it, and the
with renewed interest to the beauty and grace of eighteenth- most cultivated nations down through the centuries have

s far back as history goes, weaving is recorded as