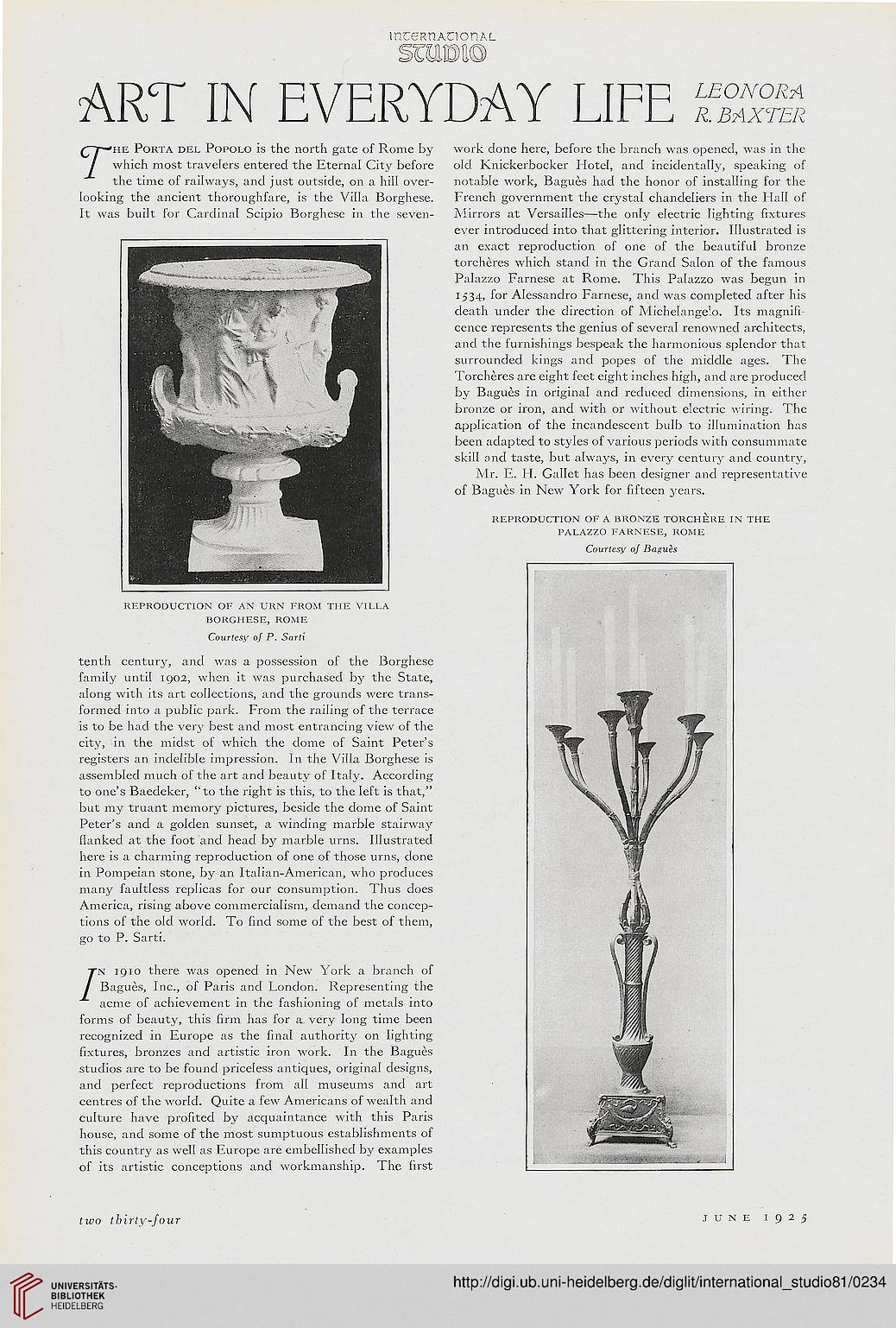 (J~7—'he Porta del Popolo is the north gate of Rome by
/ which most travelers entered the Eternal City before
the time of railways, and just outside, on a hill over-
looking the ancient thoroughfare, is the Villa Borghese.
It was built for Cardinal Scipio Borghese in the seven-

reproduction of an urn from the villa
borghese, rome

tenth century, and was a possession of the Borghese
family until 1902, when it was purchased by the State,
along with its art collections, and the grounds were trans-
formed into a public park. From the railing of the terrace
is to be had the very best and most entrancing view of the
city, in the midst of which the dome of Saint Peter's
registers an indelible impression. In the Villa Borghese is
assembled much of the art and beauty of Italy. According
to one's Baedeker, "to the right is this, to the left is that,"
but my truant memory pictures, beside the dome of Saint
Peter's and a golden sunset, a winding marble stairway
flanked at the foot and head by marble urns. Illustrated
here is a charming reproduction of one of those urns, done
in Pompeian stone, by an Italian-American, who produces
many faultless replicas for our consumption. Thus does
America, rismg above commercialism, demand the concep-
tions of the old world. To find some of the best of them,
go to P. Sarti.

/n 1910 there was opened in New York a branch of
Bagues, Inc., of Paris and London. Representing the
acme of achievement in the fashioning of metals into
forms of beauty, this firm has for a very long time been
recognized in Europe as the final authority on lighting
fixtures, bronzes and artistic iron work. In the Bagues
studios are to be found priceless antiques, original designs,
and perfect reproductions from all museums and art
centres of the world. Quite a few Americans of wealth and
culture have profited by acquaintance with this Paris
house, and some of the most sumptuous establishments of
this country as well as Europe are embellished by examples
of its artistic conceptions and workmanship. The first

work done here, before the branch was opened, was in the
old Knickerbocker Hotel, and incidentally, speaking of
notable work, Bagues had the honor of installing for the
French government the crystal chandeliers in the Hall of
Mirrors at Versailles—the only electric lighting fixtures
ever introduced into that glittering interior. Illustrated is
an exact reproduction of one of the beautiful bronze
torcheres which stand in the Grand Salon of the famous
Palazzo Farnese at Rome. This Palazzo was begun in
1534, for Alessandro Farnese, and was completed after his
death under the direction of Michelange'o. Its magnifi
cence represents the genius of several renowned architects,
and the furnishings bespeak the harmonious splendor that
surrounded kings and popes of the middle ages. The
Torcheres are eight feet eight inches high, and are produced
by Bagues in original and reduced dimensions, in either
bronze or iron, and with or without electric wiring. The
application of the incandescent bulb to illumination has
been adapted to styles of various periods with consummate
skill and taste, but always, in every century and country,
Mr. E. FI. Gallet has been designer and representative
of Bagues in New York for fifteen years.

reproduction of a bronze torchere in the
palazzo farnese, rome