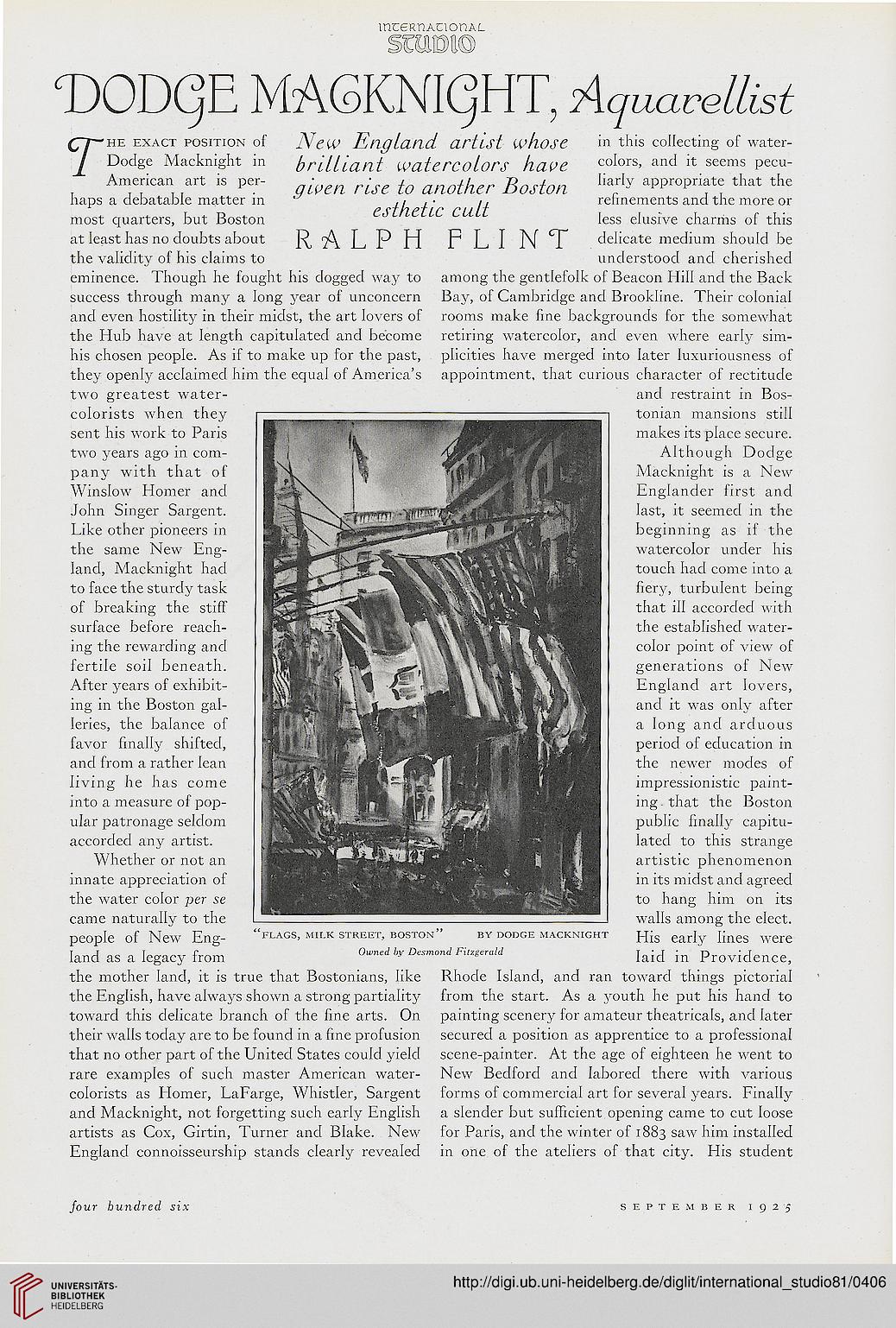 American art is per- • ^ ^ fo Early appropriate that the

most quarters, but Boston ^ ^ ' less elusive charms of this

the validity of his claims to understood and cherished

eminence. Though he fought his dogged way to among the gentlefolk of Beacon Hill and the Back

success through many a long year of unconcern Bay, of Cambridge and Brookline. Their colonial

and even hostility in their midst, the art lovers of rooms make fine backgrounds for the somewhat

the Hub have at length capitulated and become retiring watercolor, and even where early sim-

his chosen people. As if to make up for the past, plicities have merged into later luxuriousness of

they openly acclaimed him the equal of America's appointment, that curious character of rectitude

colorists when they
sent his work to Paris
two years ago in com-
pany with that of
Winslow Homer and
John Singer Sargent.
Like other pioneers in
the same New Eng-
land, Macknight had
to face the sturdy task
of breaking the stiff
surface before reach-
ing the rewarding and
fertile soil beneath.
After years of exhibit-
ing in the Boston gal-
leries, the balance of
favor finally shifted,
and from a rather lean
living he has come
into a measure of pop-
ular patronage seldom
accorded any artist.

Although Dodge
Macknight is a New
Englander first and
last, it seemed in the
beginning as if the
watercolor under his
touch had come into a
fiery, turbulent being
that ill accorded with
the established water-
color point of view of
generations of New
England art lovers,
and it was only after
a long and arduous
period of education in
the newer modes of
impressionistic paint-
ing that the Boston
public finally capitu-
lated to this strange
artistic phenomenon
in its midst and agreed
to hang him on its
walls among the elect.

people of New Eng- flags, milk street, boston by dodce macknight His early lines were
land as a legacy from Owned by Desmond Fitzgerald laid in Providence,

the mother land, it is true that Bostonians, like Rhode Island, and ran toward things pictorial
the English, have always shown a strong partiality from the start. As a youth he put his hand to
toward this delicate branch of the fine arts. On painting scenery for amateur theatricals, and later
their walls today are to be found in a fine profusion secured a position as apprentice to a professional
that no other part of the United States could yield scene-painter. At the age of eighteen he went to
rare examples of such master American water- New Bedford and labored there with various
colorists as Homer, LaFarge, Whistler, Sargent forms of commercial art for several years. Finally
and Macknight, not forgetting such early English a slender but sufficient opening came to cut loose
artists as Cox, Girtin, Turner and Blake. New for Paris, and the winter of 1883 saw him installed
England connoisseurship stands clearly revealed in one of the ateliers of that city. His student