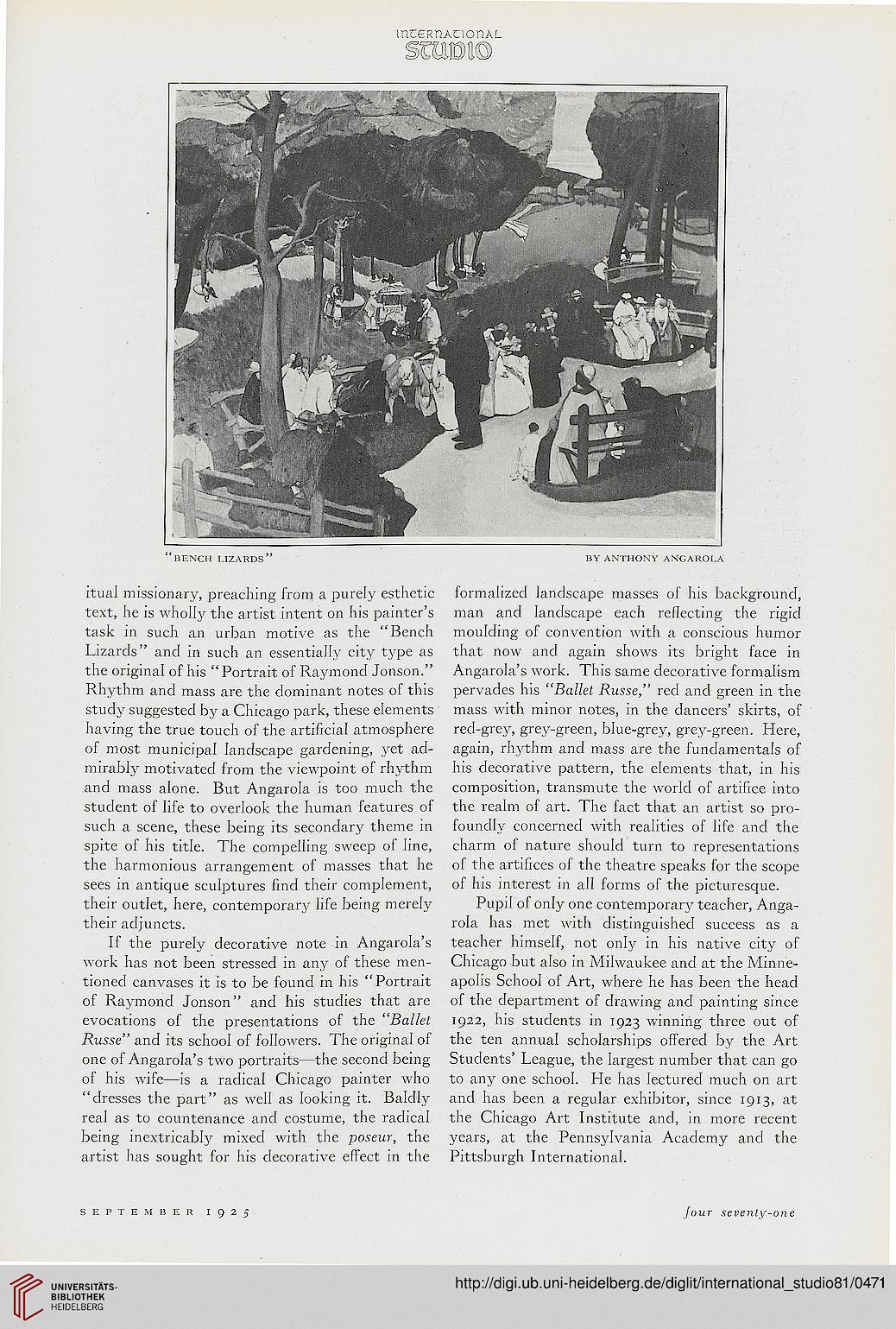 itual missionary, preaching from a purely esthetic
text, he is wholly the artist intent on his painter's
task in such an urban motive as the "Bench
Lizards" and in such an essentially city type as
the original of his "Portrait of Raymond Jonson."
Rhythm and mass are the dominant notes of this
study suggested by a Chicago park, these elements
having the true touch of the artificial atmosphere
of most municipal landscape gardening, yet ad-
mirably motivated from the viewpoint of rhythm
and mass alone. But Angarola is too much the
student of life to overlook the human features of
such a scene, these being its secondary theme in
spite of his title. The compelling sweep of line,
the harmonious arrangement of masses that he
sees in antique sculptures find their complement,
their outlet, here, contemporary life being merely
their adjuncts.

If the purely decorative note in Angarola's
work has not been stressed in any of these men-
tioned canvases it is to be found in his "Portrait
of Raymond Jonson" and his studies that are
evocations of the presentations of the "Ballet
Russe" and its school of followers. The original of
one of Angarola's two portraits—the second being
of his wife—is a radical Chicago painter who
"dresses the part" as well as looking it. Baldly
real as to countenance and costume, the radical
being inextricably mixed with the poseur, the
artist has sought for his decorative effect in the

formalized landscape masses of his background,
man and landscape each reflecting the rigid
moulding of convention with a conscious humor
that now and again shows its bright face in
Angarola's work. This same decorative formalism
pervades his "Ballet Russe," red and green in the
mass with minor notes, in the dancers' skirts, of
red-grey, grey-green, blue-grey, grey-green. Here,
again, rhythm and mass are the fundamentals of
his decorative pattern, the elements that, in his
composition, transmute the world of artifice into
the realm of art. The fact that an artist so pro-
foundly concerned with realities of life and the
charm of nature should turn to representations
of the artifices of the theatre speaks for the scope
of his interest in all forms of the picturesque.

Pupil of only one contemporary teacher, Anga-
rola has met with distinguished success as a
teacher himself, not only in his native city of
Chicago but also in Milwaukee and at the Minne-
apolis School of Art, where he has been the head
of the department of drawing and painting since
1922, his students in 1923 winning three out of
the ten annual scholarships offered by the Art
Students' League, the largest number that can go
to any one school. He has lectured much on art
and has been a regular exhibitor, since 1913, at
the Chicago Art Institute and, in more recent
years, at the Pennsylvania Academy and the
Pittsburgh International.