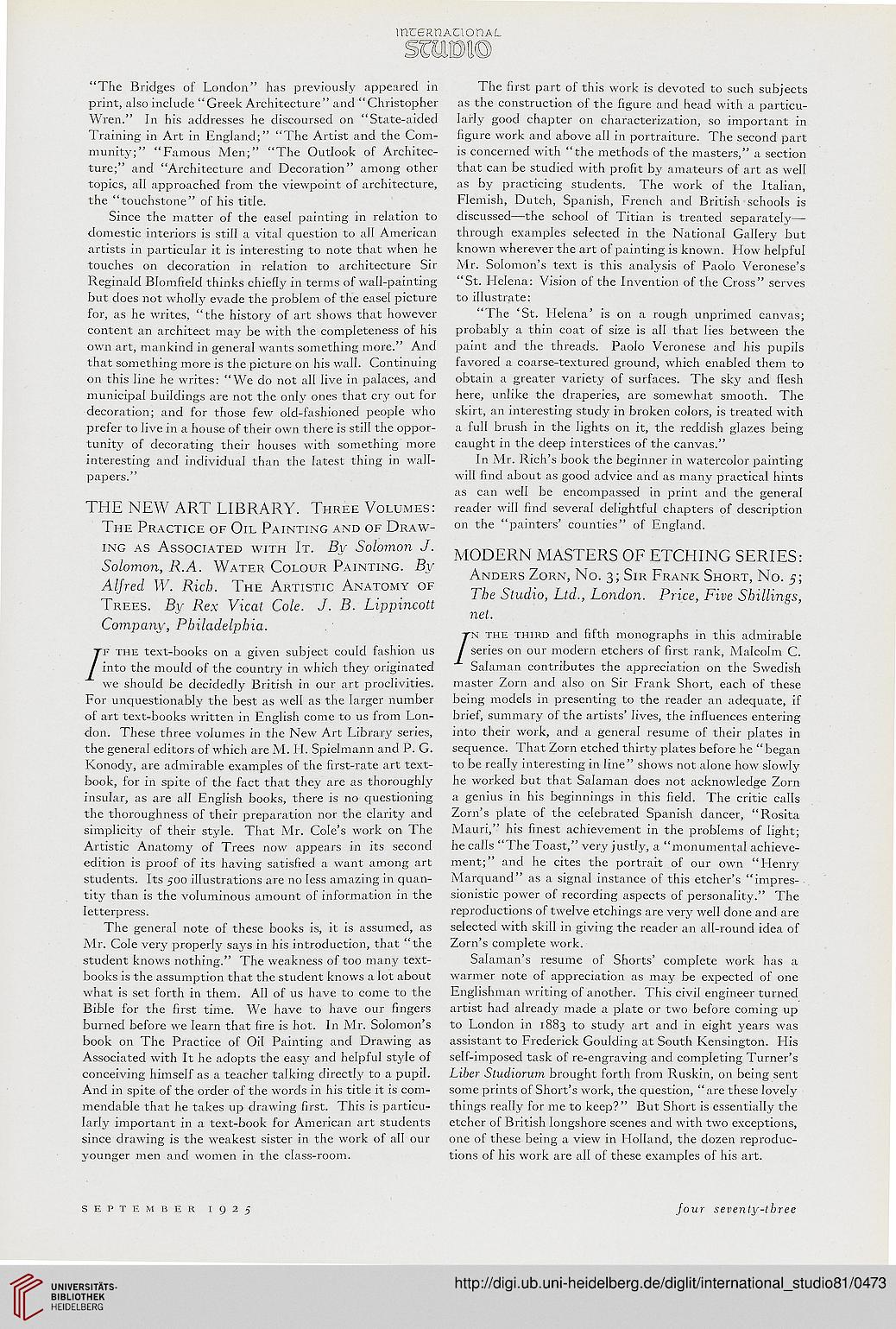 "The Bridges of London" has previously appeared in
print, also include "Greek Architecture" and "Christopher
Wren." In his addresses he discoursed on "State-aided
Training in Art in England;" "The Artist and the Com-
munity;" "Famous Men;" "The Outlook of Architec-
ture;" and "Architecture and Decoration" among other
topics, all approached from the viewpoint of architecture,
the "touchstone" of his title.

Since the matter of the easel painting in relation to
domestic interiors is still a vital question to all American
artists in particular it is interesting to note that when he
touches on decoration in relation to architecture Sir
Reginald Blomfield thinks chiefly in terms of wall-painting
but does not wholly evade the problem of the easel picture
for, as he writes, "the history of art shows that however
content an architect may be with the completeness of his
own art, mankind in general wants something more." And
that something more is the picture on his wall. Continuing
on this line he writes: "We do not all live in palaces, and
municipal buildings are not the only ones that cry out for
decoration; and for those few old-fashioned people who
prefer to live in a house of their own there is still the oppor-
tunity of decorating their houses with something more
interesting and individual than the latest thing in wall-
papers."

THE NEW ART LIBRARY. Three Volumes:
The Practice of Oil Painting and of Draw-
ing as Associated with It. By Solomon J.
Solomon, R.A. Water Colour Painting. By
Alfred W. Rich. The Artistic Anatomy of
Trees. By Rex Vicat Cole. J. B. Lippincott
Company, Philadelphia.

/f the text-books on a given subject could fashion us
into the mould of the country in which they originated
we should be decidedly British in our art proclivities.
For unquestionably the best as well as the larger number
of art text-books written in English come to us from Lon-
don. These three volumes in the New Art Library series,
the general editors of which are M. H. Spielmann and P. G.
Konody, are admirable examples of the first-rate art text-
book, for in spite of the fact that they are as thoroughly
insular, as are all English books, there is no questioning
the thoroughness of their preparation nor the clarity and
simplicity of their style. That Mr. Cole's work on The
Artistic Anatomy of Trees now appears in its second
edition is proof of its having satisfied a want among art
students. Its 500 illustrations are no less amazing in quan-
tity than is the voluminous amount of information in the
letterpress.

The general note of these books is, it is assumed, as
Mr. Cole very properly says in his introduction, that "the
student knows nothing." The weakness of too many text-
books is the assumption that the student knows a lot about
what is set forth in them. All of us have to come to the
Bible for the first time. We have to have our fingers
burned before we learn that fire is hot. In Mr. Solomon's
book on The Practice of Oil Painting and Drawing as
Associated with It he adopts the easy and helpful style of
conceiving himself as a teacher talking directly to a pupil.
And in spite of the order of the words in his title it is com-
mendable that he takes up drawing first. This is particu-
larly important in a text-book for American art students
since drawing is the weakest sister in the work of all our
younger men and women in the class-room.

The first part of this work is devoted to such subjects
as the construction of the figure and head with a particu-
larly good chapter on characterization, so important in
figure work and above all in portraiture. The second part
is concerned with "the methods of the masters," a section
that can be studied with profit by amateurs of art as well
as by practicing students. The work of the Italian,
Flemish, Dutch, Spanish, French and British schools is
discussed—the school of Titian is treated separately—
through examples selected in the National Gallery but
known wherever the art of painting is known. How helpful
Mr. Solomon's text is this analysis of Paolo Veronese's
"St. Helena: Vision of the Invention of the Cross" serves
to illustrate:

"The 'St. Helena' is on a rough unprimed canvas;
probably a thin coat of size is all that lies between the
paint and the threads. Paolo Veronese and his pupils
favored a coarse-textured ground, which enabled them to
obtain a greater variety of surfaces. The sky and flesh
here, unlike the draperies, are somewhat smooth. The
skirt, an interesting study in broken colors, is treated with
a full brush in the lights on it, the reddish glazes being
caught in the deep interstices of the canvas."

In Mr. Rich's book the beginner in watercolor painting
will find about as good advice and as many practical hints
as can well be encompassed in print and the general
reader will find several delightful chapters of description
on the "painters' counties" of England.

/n the third and fifth monographs in this admirable
series on our modern etchers of first rank, Malcolm C.
Salaman contributes the appreciation on the Swedish
master Zorn and also on Sir Frank Short, each of these
being models in presenting to the reader an adequate, if
brief, summary of the artists' lives, the influences entering
into their work, and a general resume of their plates in
sequence. That Zorn etched thirty plates before he " began
to be really interesting in line" shows not alone how slowly
he worked but that Salaman does not acknowledge Zorn
a genius in his beginnings in this field. The critic calls
Zorn's plate of the celebrated Spanish dancer, "Rosita
Mauri," his finest achievement in the problems of light;
he calls "The Toast," very justly, a "monumental achieve-
ment;" and he cites the portrait of our own "Henry
Marquand" as a signal instance of this etcher's "impres-
sionistic power of recording aspects of personality." The
reproductions of twelve etchings are very well done and are
selected with skill in giving the reader an all-round idea of
Zorn's complete work.

Salaman's resume of Shorts' complete work has a
warmer note of appreciation as may be expected of one
Englishman writing of another. This civil engineer turned
artist had already made a plate or two before coming up
to London in 1883 to study art and in eight years was
assistant to Frederick Goulding at South Kensington. His
self-imposed task of re-engraving and completing Turner's
Liber Sludiorum brought forth from Ruskin, on being sent
some prints of Short's work, the question, " are these lovely
things really for me to keep?" But Short is essentially the
etcher of British longshore scenes and with two exceptions,
one of these being a view in Holland, the dozen reproduc-
tions of his work are all of these examples of his art.