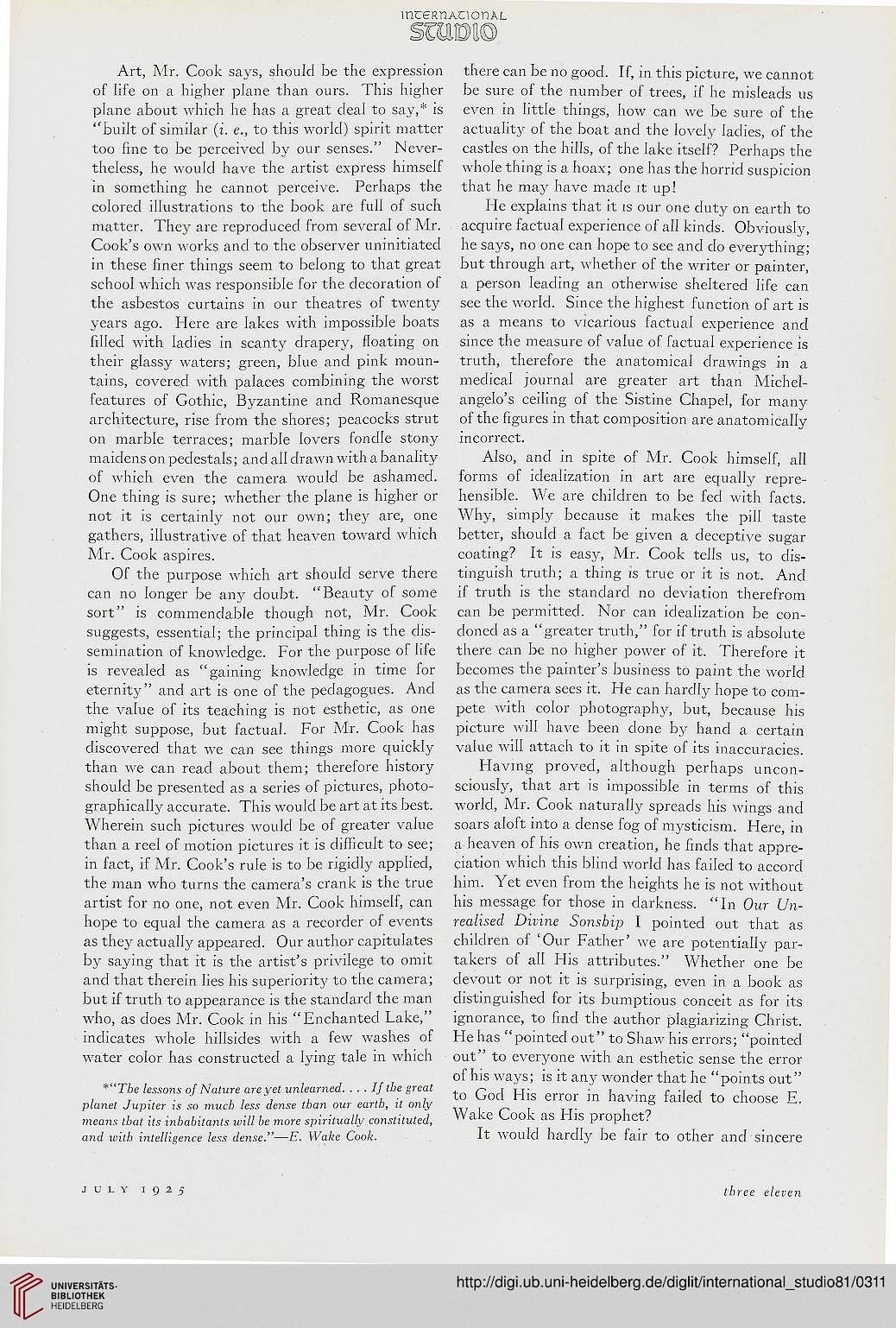 Art, Mr. Cook says, should be the expression
of life on a higher plane than ours. This higher
plane about which he has a great deal to say,* is
"built of similar (i. e., to this world) spirit matter
too fine to be perceived by our senses." Never-
theless, he would have the artist express himself
in something he cannot perceive. Perhaps the
colored illustrations to the book are full of such
matter. They are reproduced from several of Mr.
Cook's own works and to the observer uninitiated
in these finer things seem to belong to that great
school which was responsible for the decoration of
the asbestos curtains in our theatres of twenty
years ago. Here are lakes with impossible boats
filled with ladies in scanty drapery, floating on
their glassy waters; green, blue and pink moun-
tains, covered with palaces combining the worst
features of Gothic, Byzantine and Romanesque
architecture, rise from the shores; peacocks strut
on marble terraces; marble lovers fondle stony
maidens on pedestals; and all drawn with a banality
of which even the camera would be ashamed.
One thing is sure; whether the plane is higher or
not it is certainly not our own; they are, one
gathers, illustrative of that heaven toward which
Mr. Cook aspires.

Of the purpose which art should serve there
can no longer be any doubt. "Beauty of some
sort" is commendable though not, Mr. Cook
suggests, essential; the principal thing is the dis-
semination of knowledge. For the purpose of life
is revealed as "gaining knowledge in time for
eternity" and art is one of the pedagogues. And
the value of its teaching is not esthetic, as one
might suppose, but factual. For Mr. Cook has
discovered that we can see things more quickly
than we can read about them; therefore history
should be presented as a series of pictures, photo-
graphically accurate. This would be art at its best.
Wherein such pictures would be of greater value
than a reel of motion pictures it is difficult to see;
in fact, if Mr. Cook's rule is to be rigidly applied,
the man who turns the camera's crank is the true
artist for no one, not even Mr. Cook himself, can
hope to equal the camera as a recorder of events
as they actually appeared. Our author capitulates
by saying that it is the artist's privilege to omit
and that therein lies his superiority to the camera;
but if truth to appearance is the standard the man
who, as does Mr. Cook in his "Enchanted Lake,"
indicates whole hillsides with a few washes of
water color has constructed a lying tale in which

*"The lessons of Nature are yet unlearned. . . . IJ the great
planet Jupiter is so much less dense than our earth, it only-
means that its inhabitants will be more spiritually constituted,
and with intelligence less dense."—E. Wake Cook.

there can be no good. If, in this picture, we cannot
be sure of the number of trees, if he misleads us
even in little things, how can we be sure of the
actuality of the boat and the lovely ladies, of the
castles on the hills, of the lake itself? Perhaps the
whole thing is a hoax; one has the horrid suspicion
that he may have made it up!

He explains that it is our one duty on earth to
acquire factual experience of all kinds. Obviously,
he says, no one can hope to see and do everything;
but through art, whether of the writer or painter,
a person leading an otherwise sheltered life can
see the world. Since the highest function of art is
as a means to vicarious factual experience and
since the measure of value of factual experience is
truth, therefore the anatomical drawings in a
medical journal are greater art than Michel-
angelo's ceiling of the Sistine Chapel, for many
of the figures in that composition are anatomically
incorrect.

Also, and in spite of Mr. Cook himself, all
forms of idealization in art are equally repre-
hensible. We are children to be fed with facts.
Why, simply because it makes the pill taste
better, should a fact be given a deceptive sugar
coating? It is easy, Air. Cook tells us, to dis-
tinguish truth; a thing is true or it is not. And
if truth is the standard no deviation therefrom
can be permitted. Nor can idealization be con-
doned as a "greater truth," for if truth is absolute
there can be no higher power of it. Therefore it
becomes the painter's business to paint the world
as the camera sees it. He can hardly hope to com-
pete with color photography, but, because his
picture will have been done by hand a certain
value will attach to it in spite of its inaccuracies.

Having proved, although perhaps uncon-
sciously, that art is impossible in terms of this
world, Mr. Cook naturally spreads his wings and
soars aloft into a dense fog of mysticism. Here, in
a heaven of his own creation, he finds that appre-
ciation which this blind world has failed to accord
him. Yet even from the heights he is not without
his message for those in darkness. "In Our Un-
realised Divine Sonship I pointed out that as
children of 'Our Father' we are potentially par-
takers of all His attributes." Whether one be
devout or not it is surprising, even in a book as
distinguished for its bumptious conceit as for its
ignorance, to find the author plagiarizing Christ.
He has "pointed out" to Shaw his errors; "pointed
out" to everyone with an esthetic sense the error
of his ways; is it any wonder that he "points out"
to God His error in having failed to choose E.
Wake Cook as His prophet?

It would hardly be fair to other and sincere