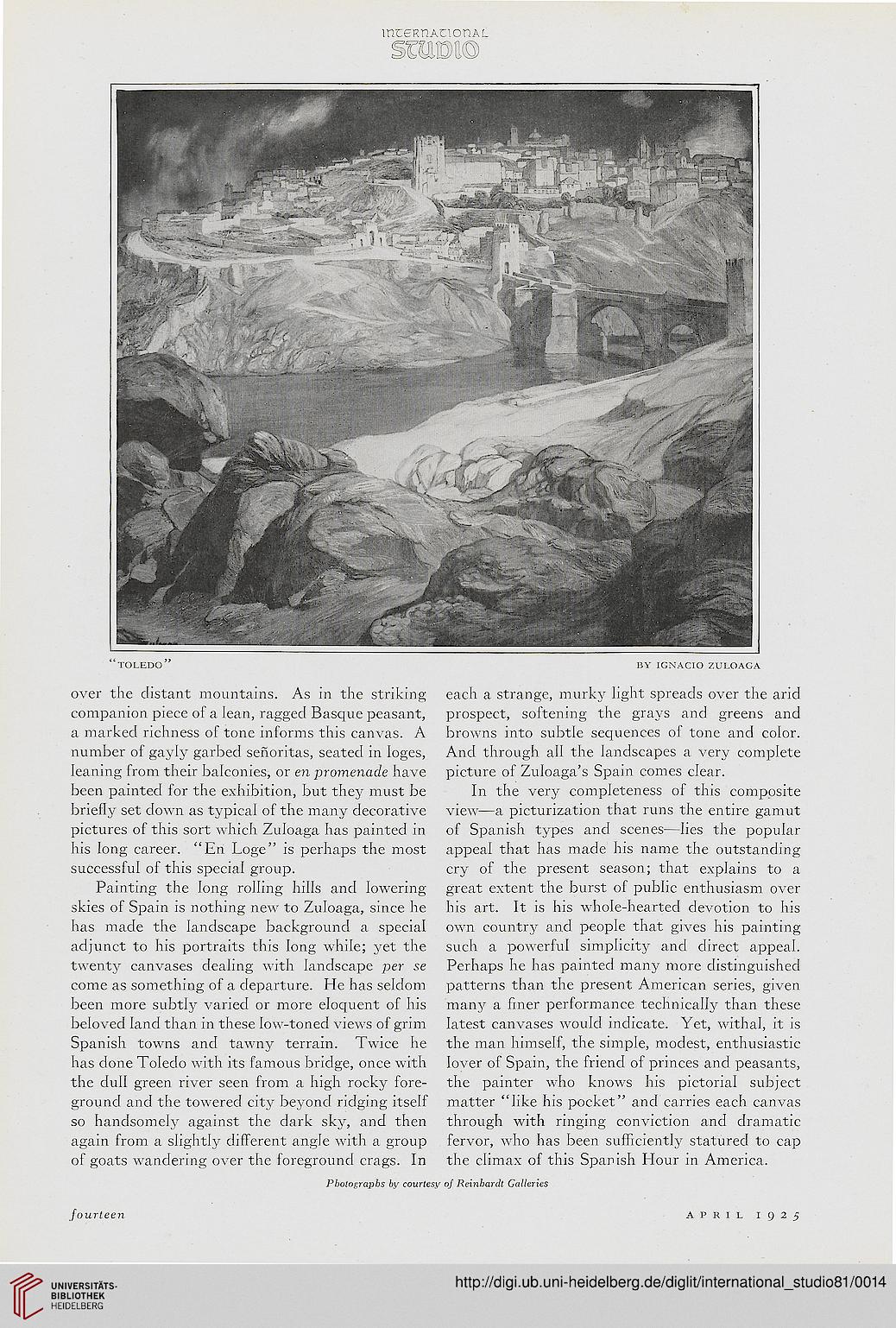 over the distant mountains. As in the striking
companion piece of a lean, ragged Basque peasant,
a marked richness of tone informs this canvas. A
number of gayly garbed senoritas, seated in Ioges,
leaning from their balconies, or en promenade have
been painted for the exhibition, but they must be
briefly set down as typical of the many decorative
pictures of this sort which Zuloaga has painted in
his long career. "En Loge" is perhaps the most
successful of this special group.

Painting the long rolling hills and lowering
skies of Spain is nothing new to Zuloaga, since he
has made the landscape background a special
adjunct to his portraits this long while; yet the
twenty canvases dealing with landscape per se
come as something of a departure. He has seldom
been more subtly varied or more eloquent of his
beloved land than in these low-toned views of grim
Spanish towns and tawny terrain. Twice he
has done Toledo with its famous bridge, once with
the dull green river seen from a high rocky fore-
ground and the towered city beyond ridging itself
so handsomely against the dark sky, and then
again from a slightly different angle with a group
of goats wandering over the foreground crags. In

each a strange, murky light spreads over the arid
prospect, softening the grays and greens and
browns into subtle sequences of tone and color.
And through all the landscapes a very complete
picture of Zuloaga's Spain comes clear.

In the very completeness oi this composite
view—a picturization that runs the entire gamut
of Spanish types and scenes—lies the popular
appeal that has made his name the outstanding
cry of the present season; that explains to a
great extent the burst of public enthusiasm over
his art. It is his whole-hearted devotion to his
own country and people that gives his painting
such a powerful simplicity and direct appeal.
Perhaps he has painted many more distinguished
patterns than the present American series, given
many a finer performance technically than these
latest canvases would indicate. Yet, withal, it is
the man himself, the simple, modest, enthusiastic
lover of Spam, the friend of princes and peasants,
the painter who knows his pictorial subject
matter "like his pocket" and carries each canvas
through with ringing conviction and dramatic
fervor, who has been sufficiently statured to cap
the climax of this Spanish Hour in America.