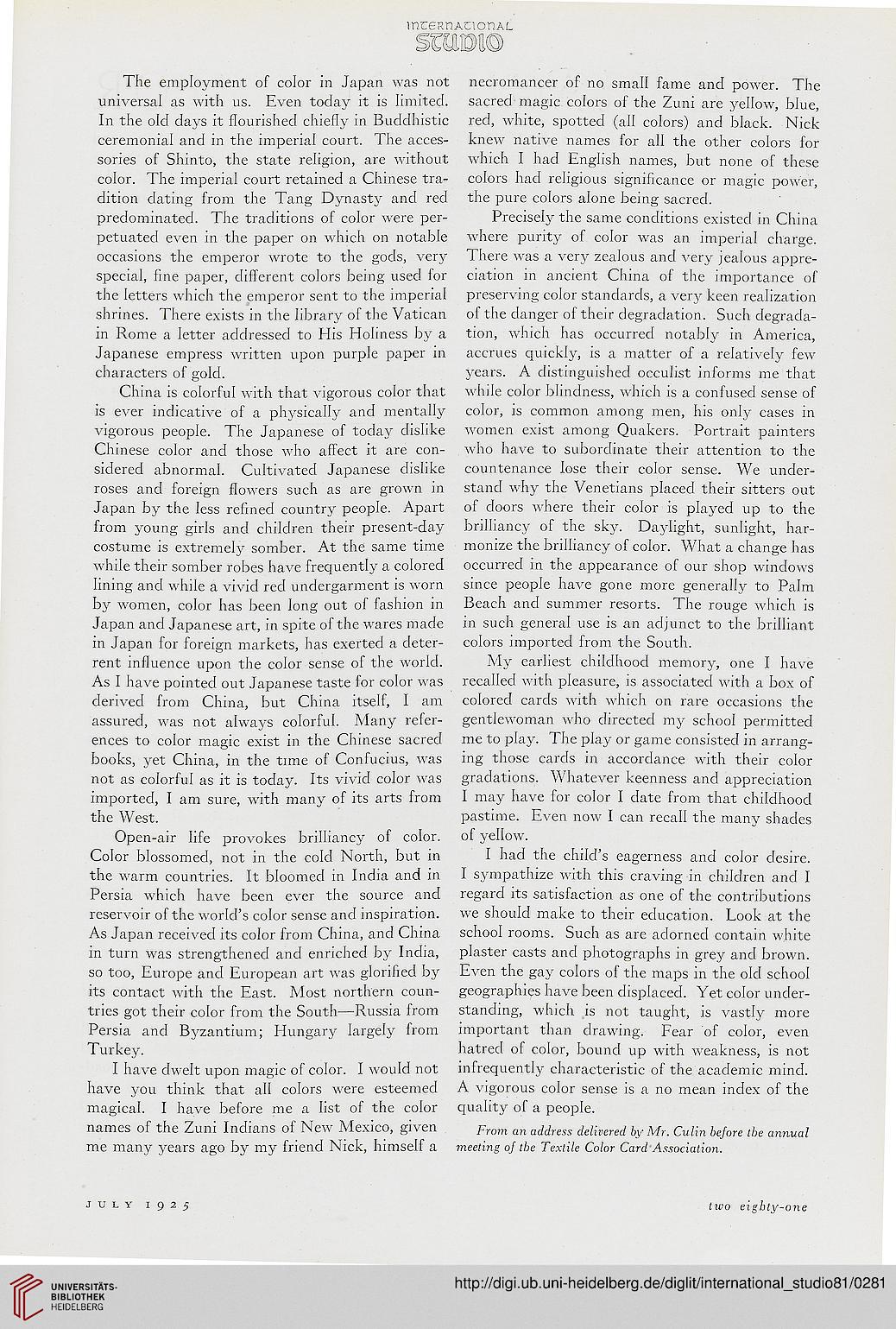 The employment of color in Japan was not
universal as with us. Even today it is limited.
In the old days it flourished chiefly in Buddhistic
ceremonial and in the imperial court. The acces-
sories of Shinto, the state religion, are without
color. The imperial court retained a Chinese tra-
dition dating from the Tang Dynasty and red
predominated. The traditions of color were per-
petuated even in the paper on which on notable
occasions the emperor wrote to the gods, very
special, fine paper, different colors being used for
the letters which the emperor sent to the imperial
shrines. There exists in the library of the Vatican
in Rome a letter addressed to His Holiness by a
Japanese empress written upon purple paper in
characters of gold.

China is colorful with that vigorous color that
is ever indicative of a physically and mentally
vigorous people. The Japanese of today dislike
Chinese color and those who affect it are con-
sidered abnormal. Cultivated Japanese dislike
roses and foreign flowers such as are grown in
Japan by the less refined country people. Apart
from young girls and children their present-day
costume is extremely somber. At the same time
while their somber robes have frequently a colored
lining and while a vivid red undergarment is worn
by women, color has been long out of fashion in
Japan and Japanese art, in spite of the wares made
in Japan for foreign markets, has exerted a deter-
rent influence upon the color sense of the world.
As I have pointed out Japanese taste for color was
derived from China, but China itself, I am
assured, was not always colorful. Many refer-
ences to color magic exist in the Chinese sacred
books, yet China, in the time of Confucius, was
not as colorful as it is today. Its vivid color was
imported, I am sure, with many of its arts from
the West.

Open-air life provokes brilliancy of color.
Color blossomed, not in the cold North, but in
the warm countries. It bloomed in India and in
Persia which have been ever the source and
reservoir of the world's color sense and inspiration.
As Japan received its color from China, and China
in turn was strengthened and enriched by India,
so too, Europe and European art was glorified by
its contact with the East. Most northern coun-
tries got their color from the South—Russia from
Persia and Byzantium; Hungary largely from
Turkey.

I have dwelt upon magic of color. I would not
have you think that all colors were esteemed
magical. I have before me a list of the color
names of the Zuni Indians of New Mexico, given
me many years ago by my friend Nick, himself a

necromancer of no small fame and power. The
sacred magic colors of the Zuni are yellow, blue,
red, white, spotted (all colors) and black. Nick
knew native names for all the other colors for
which I had English names, but none of these
colors had religious significance or magic power,
the pure colors alone being sacred.

Precisely the same conditions existed in China
where purity of color was an imperial charge.
There was a very zealous and very jealous appre-
ciation in ancient China of the importance of
preserving color standards, a very keen realization
of the danger of their degradation. Such degrada-
tion, which lias occurred notably in America,
accrues quickly, is a matter of a relatively few
years. A distinguished occulist informs me that
while color blindness, which is a confused sense of
color, is common among men, his only cases in
women exist among Quakers. Portrait painters
who have to subordinate their attention to the
countenance lose their color sense. We under-
stand why the Venetians placed their sitters out
of doors where their color is played up to the
brilliancy of the sky. Daylight, sunlight, har-
monize the brilliancy of color. What a change has
occurred in the appearance of our shop windows
since people have gone more generally to Palm
Beach and summer resorts. The rouge which is
in such general use is an adjunct to the brilliant
colors imported from the South.

My earliest childhood memory, one I have
recalled with pleasure, is associated with a box of
colored cards with which on rare occasions the
gentlewoman who directed my school permitted
me to play. The play or game consisted in arrang-
ing those cards in accordance with their color
gradations. Whatever keenness and appreciation
I may have for color I date from that childhood
pastime. Even now I can recall the many shades
of yellow.

I had the child's eagerness and color desire.
I sympathize with this craving in children and I
regard its satisfaction as one of the contributions
we should make to their education. Look at the
school rooms. Such as are adorned contain white
plaster casts and photographs in grey and brown.
Even the gay colors of the maps in the old school
geographies have been displaced. Yet color under-
standing, which is not taught, is vastly more
important than drawing. Fear of color, even
hatred of color, bound up with weakness, is not
infrequently characteristic of the academic mind.
A vigorous color sense is a no mean index of the
quality of a people.

From an address delivered by Mr. Culin before the annual
meeting of the Textile Color Card Association.