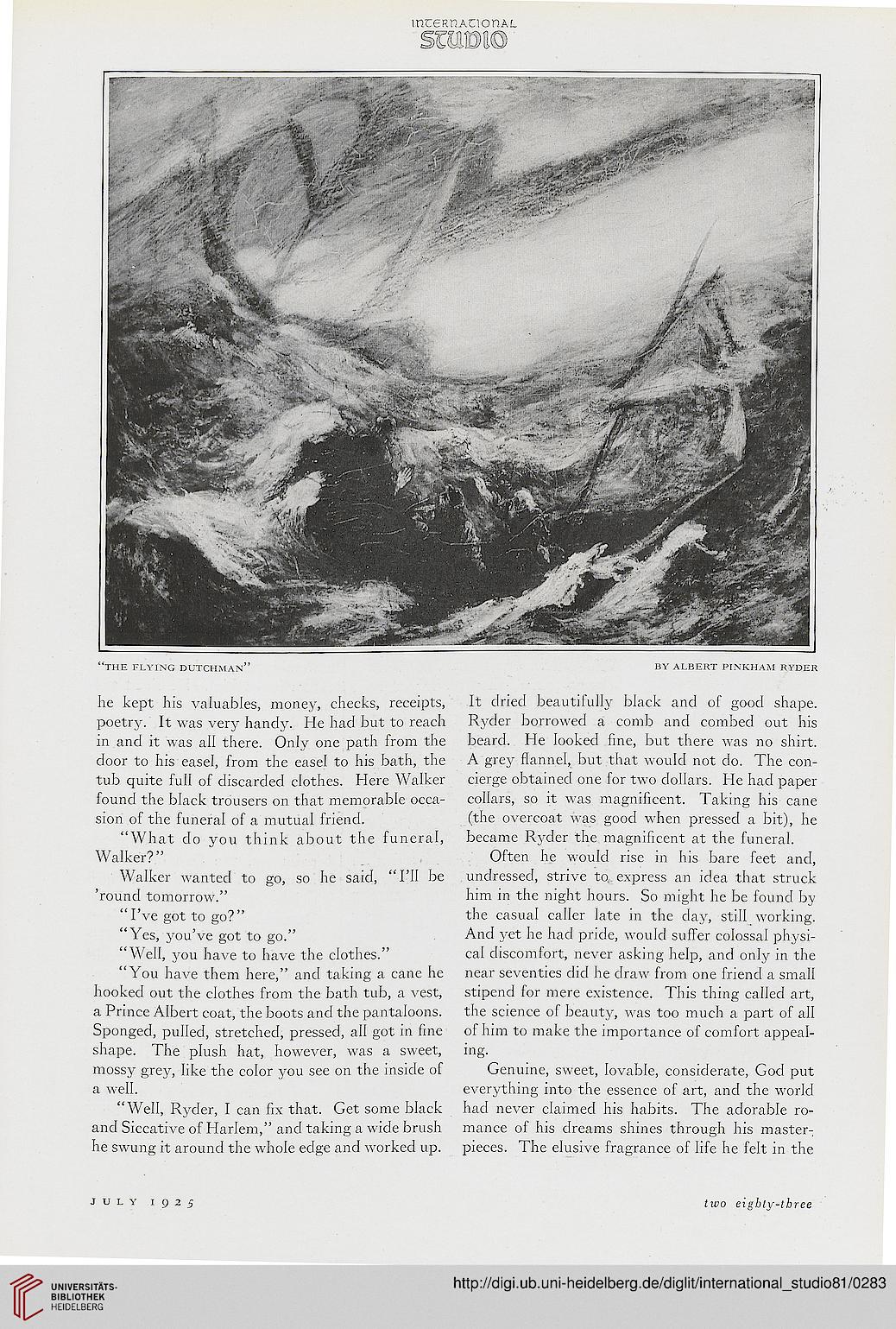 he kept his valuables, money, checks, receipts, It dried beautifully black and of good shape,
poetry. It was very handy. He had but to reach Ryder borrowed a comb and combed out his
in and it was all there. Only one path from the beard. He looked fine, but there was no shirt,
door to his easel, from the easel to his bath, the A grey flannel, but that would not do. The con-
tub quite full of discarded clothes. Here Walker cierge obtained one for two dollars. He had paper
found the black trousers on that memorable occa- collars, so it was magnificent. Taking his cane
sion of the funeral of a mutual friend. . (the overcoat was good when pressed a bit), he

"What do you think about the funeral, became Ryder the magnificent at the funeral.
Walker?" Often he would rise in his bare feet and,
Walker wanted to go, so he said, "I'll be undressed, strive to express an idea that struck
'round tomorrow." him in the night hours. So might he be found by
" I've got to go?" the casual caller late in the day, still working.
"Yes, you've got to go." And yet he had pride, would suffer colossal physi-
"Well, you have to have the clothes." cal discomfort, never asking help, and only in the
"You have them here," and taking a cane he near seventies did he draw from one friend a small
hooked out the clothes from the bath tub, a vest, stipend for mere existence. This thing called art,
a Prince Albert coat, the boots and the pantaloons. the science of beauty, was too much a part of all
Sponged, pulled, stretched, pressed, all got in fine of him to make the importance of comfort appeal-
shape. The plush hat, however, was a sweet, ing.

mossy grey, like the color you see on the inside of Genuine, sweet, lovable, considerate, God put
a well. everything into the essence of art, and the world
"Well, Ryder, I can fix that. Get some black had never claimed his habits. The adorable ro-
and Siccative of Harlem," and taking a wide brush mance of his dreams shines through his master-
he swung it around the whole edge and worked up. pieces. The elusive fragrance of life he felt in the