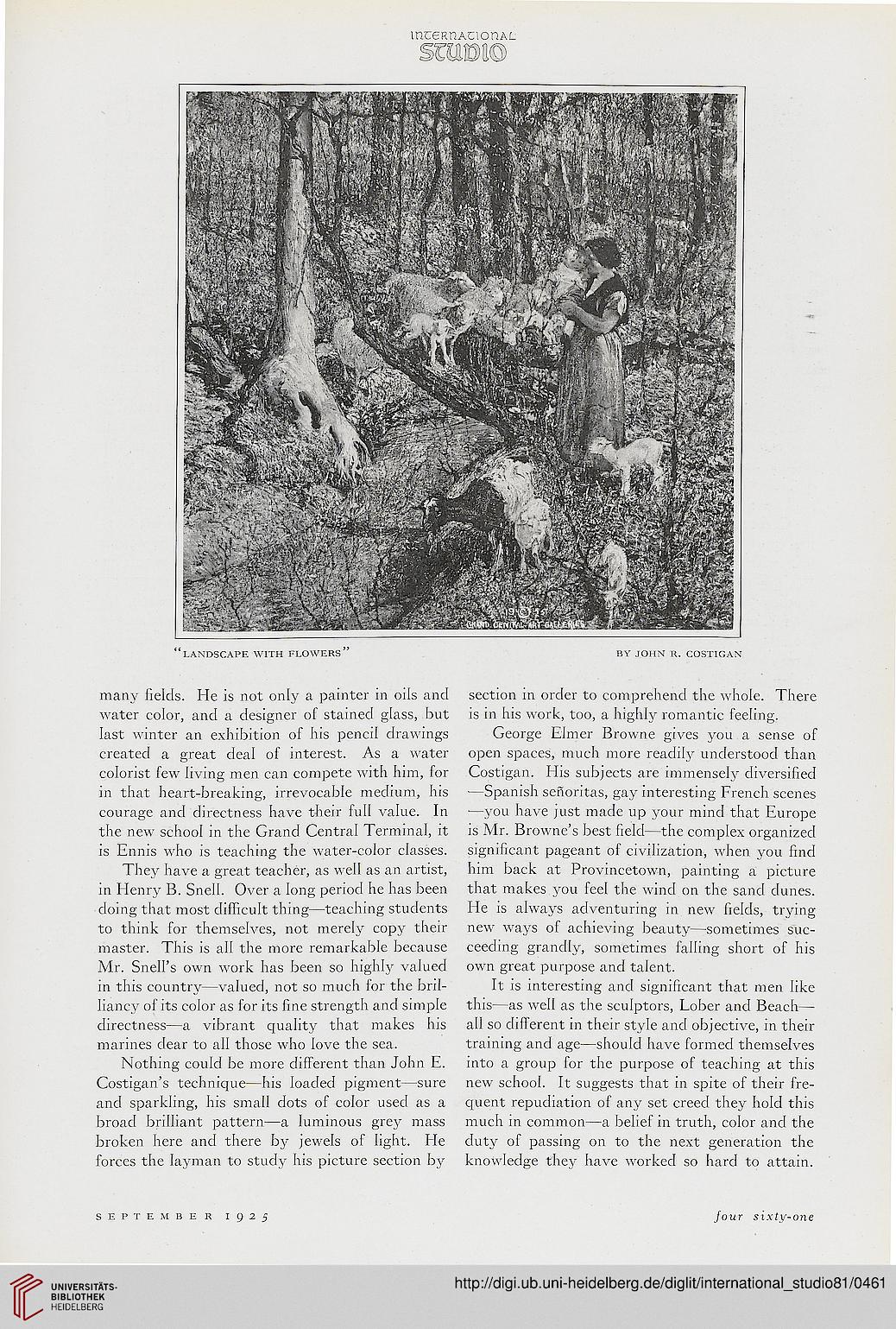 many fields. He is not only a painter in oils and
water color, and a designer of stained glass, but
last winter an exhibition of his pencil drawings
created a great deal of interest. As a water
colorist few living men can compete with him, for
in that heart-breaking, irrevocable medium, his
courage and directness have their full value. In
the new school in the Grand Central Terminal, it
is Ennis who is teaching the water-color classes.

They have a great teacher, as well as an artist,
in Henry B. Snell. Over a long period he has been
doing that most difficult thing—teaching students
to think for themselves, not merely copy their
master. This is all the more remarkable because
Mr. Snell's own work has been so highly valued
in this country—valued, not so much for the bril-
liancy of its color as for its fine strength and simple
directness—a vibrant quality that makes his
marines dear to all those who love the sea.

Nothing could be more different than John E.
Costigan's technique—his loaded pigment—sure
and sparkling, his small dots of color used as a
broad brilliant pattern—a luminous grey mass
broken here and there by jewels of light. He
forces the layman to study his picture section by

section in order to comprehend the whole. There
is in his work, too, a highly romantic feeling.

George Elmer Browne gives you a sense of
open spaces, much more readily understood than
Costigan. His subjects are immensely diversified
—Spanish senoritas, gay interesting French scenes
■—you have just made up your mind that Europe
is Mr. Browne's best field—the complex organized
significant pageant of civilization, when you find
him back at Provincetown, painting a picture
that makes you feel the wind on the sand dunes.
He is always adventuring in new fields, trying
new ways of achieving beauty—sometimes suc-
ceeding grandly, sometimes falling short of his
own great purpose and talent.

It is interesting and significant that men like
this—as well as the sculptors, Lober and Beach—
all so different in their style and objective, in their
training and age—should have formed themselves
into a group for the purpose of teaching at this
new school. It suggests that in spite of their fre-
quent repudiation of any set creed they hold this
much in common—a belief in truth, color and the
duty of passing on to the next generation the
knowledge they have worked so hard to attain.