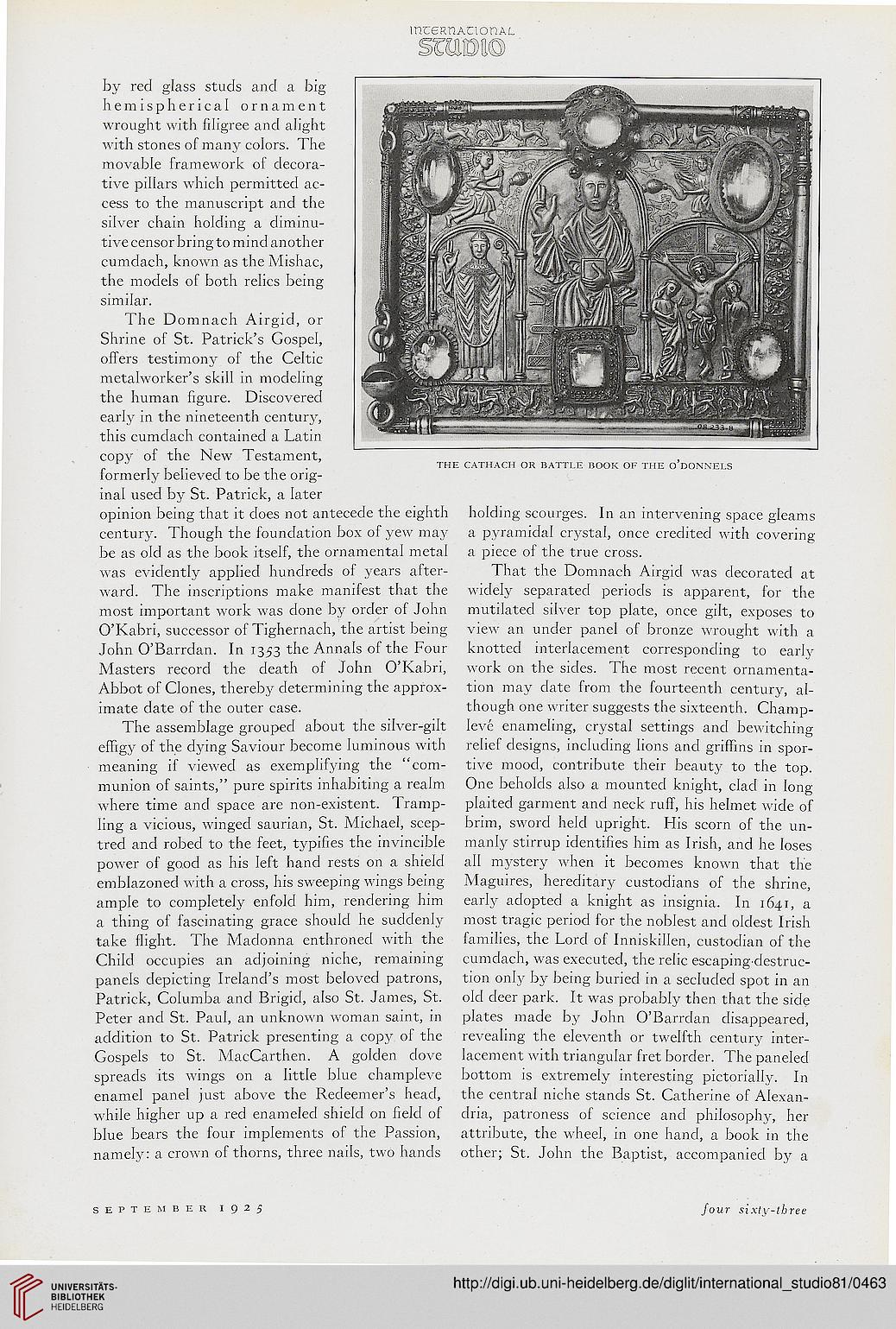 by red glass studs and a big
hemispherical ornament
wrought with filigree and alight
with stones of many colors. The
movable framework of decora-
tive pillars which permitted ac-
cess to the manuscript and the
silver chain holding a diminu-
tive censor bring to mind another
cumdach, known as the Mishac,
the models of both relics being
similar.

The Domnach Airgid, or
Shrine of St. Patrick's Gospel,
offers testimony of the Celtic
metalworker's skill in modeling
the human figure. Discovered
early in the nineteenth century,
this cumdach contained a Latin
copy of the New Testament,

formerly believed to be the orig-
inal used by St. Patrick, a later

opinion being that it does not antecede the eighth holding scourges. In an intervening space gleams

century. Though the foundation box of yew may a pyramidal crystal, once credited with covering

be as old as the book itself, the ornamental metal a piece of the true cross.

was evidently applied hundreds of years after- That the Domnach Airgid was decorated at
ward. The inscriptions make manifest that the widely separated periods is apparent, for the
most important work was done by order of John mutilated silver top plate, once gilt, exposes to
O'Kabri, successor of Tighernach, the artist being view an under panel of bronze wrought with a
John O'Barrdan. In 1353 the Annals of the Four knotted interlacement corresponding to early
Masters record the death of John O'Kabri, work on the sides. The most recent ornamenta-
Abbot of Clones, thereby determining the approx- tion may date from the fourteenth century, al-
imate date of the outer case. though one writer suggests the sixteenth. Champ-
The assemblage grouped about the silver-gilt leve enameling, crystal settings and bewitching
effigy of the dying Saviour become luminous with relief designs, including lions and griffins in spor-
meaning if viewed as exemplifying the "com- tive mood, contribute their beauty to the top.
munion of saints," pure spirits inhabiting a realm One beholds also a mounted knight, clad in long
where time and space are non-existent. Tramp- plaited garment and neck ruff, his helmet wide of
ling a vicious, winged saurian, St. Michael, seep- brim, sword held upright. His scorn of the un-
tred and robed to the feet, typifies the invincible manly stirrup identifies him as Irish, and he loses
power of good as his left hand rests on a shield all mystery when it becomes known that the
emblazoned with a cross, his sweeping wings being Maguires, hereditary custodians of the shrine,
ample to completely enfold him, rendering him early adopted a knight as insignia. In 1641, a
a thing of fascinating grace should he suddenly most tragic period for the noblest and oldest Irish
take flight. The Madonna enthroned with the families, the Lord of Inniskillen, custodian of the
Child occupies an adjoining niche, remaining cumdach, was executed, the relic escapingdestruc-
panels depicting Ireland's most beloved patrons, tion only by being buried in a secluded spot in an
Patrick, Columba and Brigid, also St. James, St. old deer park. It was probably then that the side
Peter and St. Paul, an unknown woman saint, in plates made by John O'Barrdan disappeared,
addition to St. Patrick presenting a copy of the revealing the eleventh or twelfth century inter-
Gospels to St. MacCarthen. A golden dove lacement with triangular fret border. The paneled
spreads its wings on a little blue champleve bottom is extremely interesting pictorially. In
enamel panel just above the Redeemer's head, the central niche stands St. Catherine of Alexan-
while higher up a red enameled shield on field of dria, patroness of science and philosophy, her
blue bears the four implements of the Passion, attribute, the wheel, in one hand, a book in the
namely: a crown of thorns, three nails, two hands other; St. John the Baptist, accompanied by a