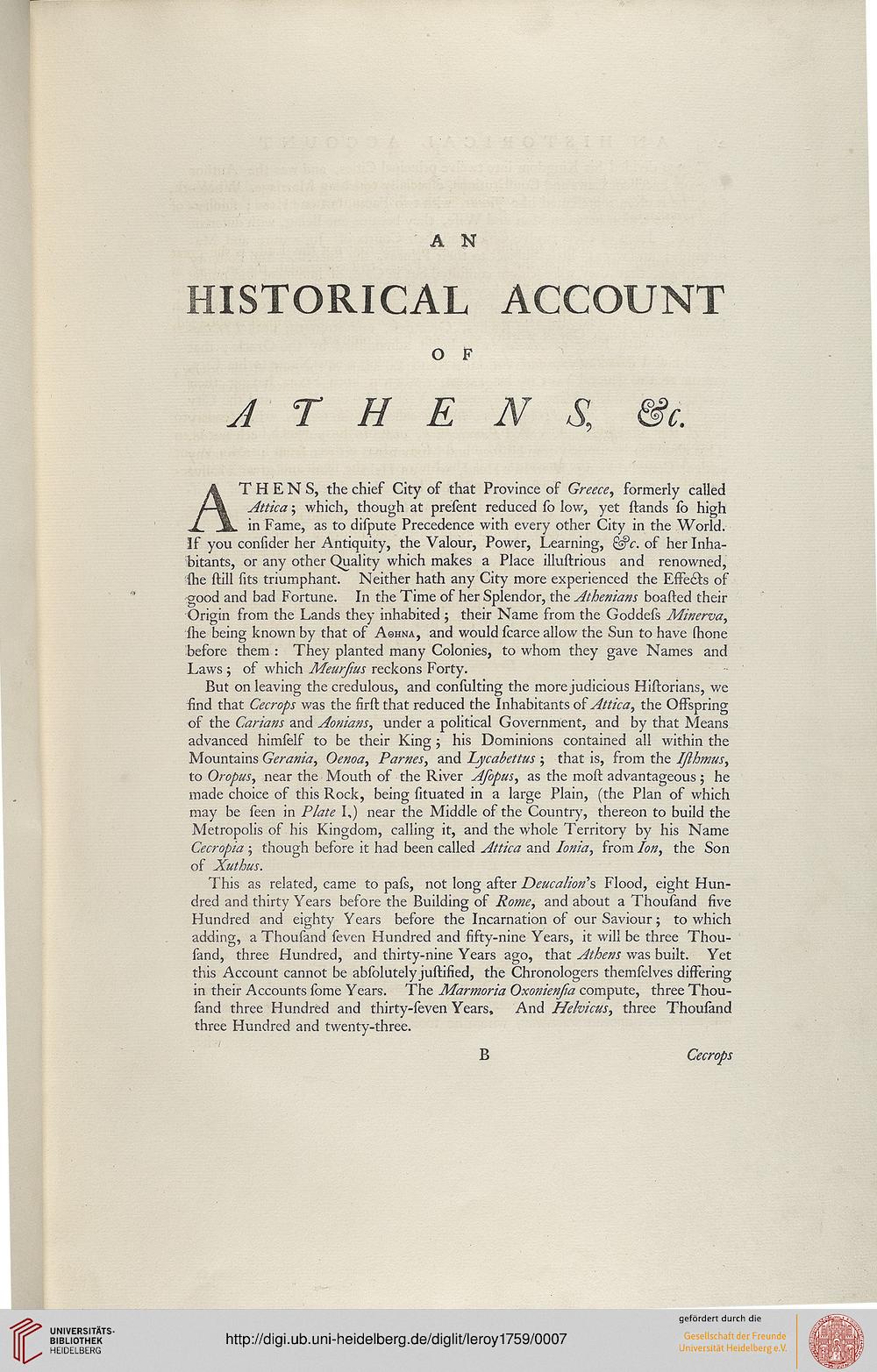 ATHENS, the chief City of that Province of Greece, formerly called
Attica; which, though at prefent reduced fo low, yet ftands lb high
in Fame, as to difpute Precedence with every other City in the World.
If you confider her Antiquity, the Valour, Power, Learning, &c. of her Inha-
bitants, or any other Quality which makes a Place Hluftrtous and renowned,
■fhe ftill fits triumphant. Neither hath any City more experienced the EfFecls of
■good and bad Fortune. In the Time of her Splendor, the Athenians boafted their
Origin from the Lands they inhabited; their Name from the Goddefs Minerva,
fhe being known by that of Ashna, and would fcarce allow the Sun to have (hone
before them : They planted many Colonies, to whom they gave Names and
Laws j of which Meurjius reckons Forty.

But on leaving the credulous, and conflilting the more judicious Hiftorians, we
■find that Cecrops was the firft that reduced the Inhabitants of .Attica, the Offspring
of the Carians and Aonians, under a political Government, and by that Means
advanced himfelf to be their King ; his Dominions contained all within the
Mountains Gerania, Oenoa, Fames, and Lycabettus ; that is, from the IJlhmus,
to Oropus, near the Mouth of the River Afopus, as the mod: advantageous; he
made choice of this Rock, being fituated in a large Plain, (the Plan of which
may be feen in Plate I,) near the Middle of the Country, thereon to build the
Metropolis of his Kingdom, calling it, and the whole Territory by his Name
Cecropia ; though before it had been called Attica and Ionia, from Ion, the Son
of Xuthus.

This as related, came to pafs, not long after Deucalion's Flood, eight Hun-
dred and thirty Years before the Building of Rome, and about a Thoufand five
Hundred and eighty Years before the Incarnation of our Saviour; to which
adding, a Thoufand {even Hundred and fifty-nine Years, it will be three Thou-
fand, three Hundred, and thirty-nine Years ago, that Athens was built. Yet
this Account cannot be abfolutelyjuftified, the Chronologers themfelves differing
in their Accounts fbme Years. The Marmoria Oxomenfia compute, three Thou-
fand three Hundred and thirty-feven Years, And Hehicus, three Thoufand
three Hundred and twenty-three.