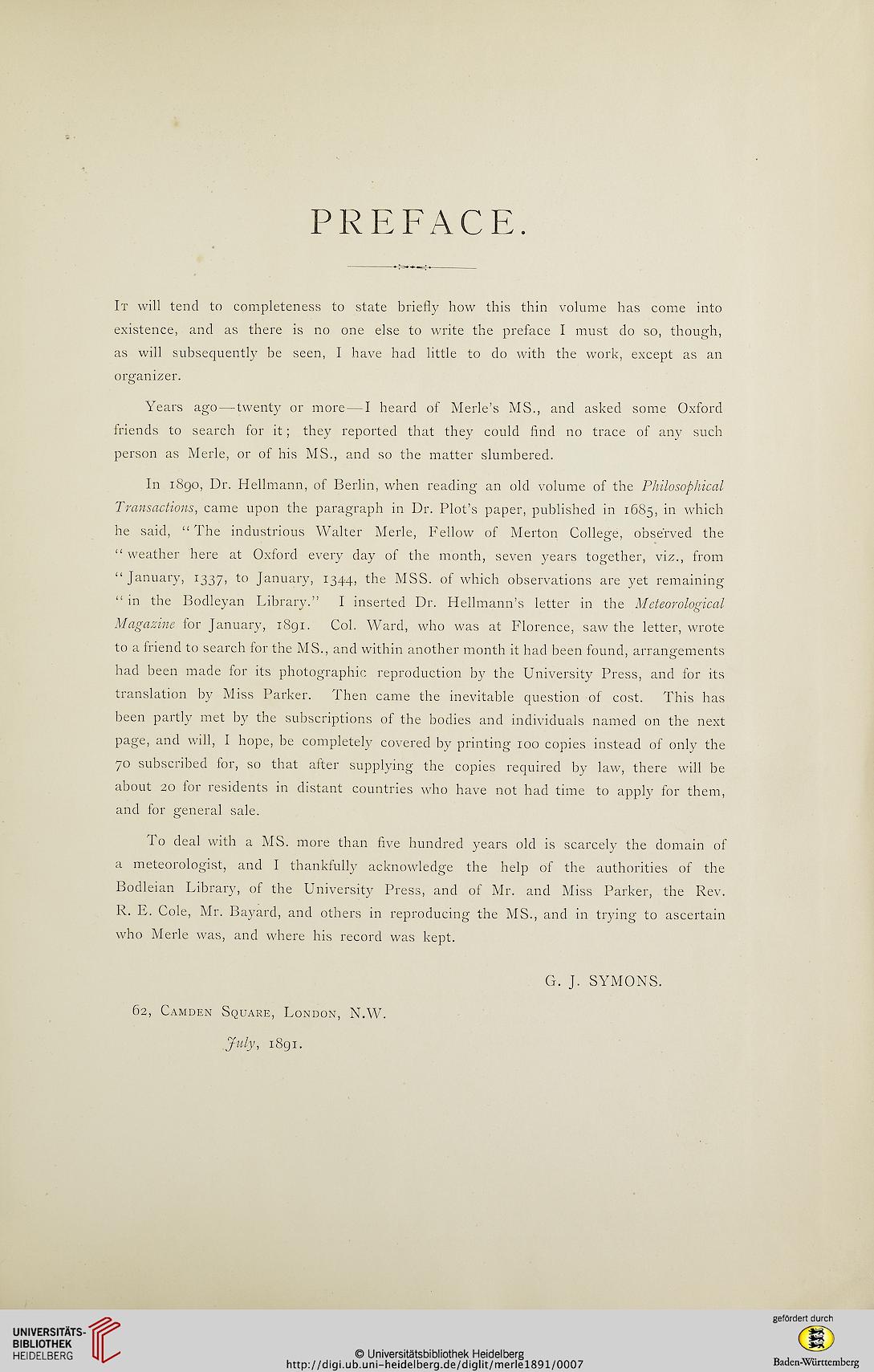 It will tend to completeness to state briefly how this thin volume has come into
existence, and as there is no one else to write the preface I must do so, though,
as will subsequently be seen, I have had little to do with the work, except as an
organizer.

Years ago — twenty or more — I heard of Merle's MS., and asked some Oxford
friends to search for it; they reported that they could find no trace of any such
person as Merle, or of his MS., and so the matter slumbered.

In i8go, Dr. Hellmann, of Berlin, when reading an old volume of the Philosophical
Transactions, came upon the paragraph in Dr. Plot's paper, published in 1685, in which
he said, "The industrious Walter Merle, Fellow of Merton College, observed the
" weather here at Oxford every day of the month, seven years together, viz., from
" January, 1337, to Januarv> I344> the MSS. of which observations are yet remaining
" in the Bodleyan Library." I inserted Dr. Hellmann's letter in the Meteorological
Magazine for January, 1891. Col. Ward, who was at Florence, saw the letter, wrote
to a friend to search for the MS., and within another month it had been found, arrangements
had been made for its photographic reproduction by the University Press, and for its
translation by Miss Parker. Then came the inevitable question of cost. This has
been partly met by the subscriptions of the bodies and individuals named on the next
page, and will, I hope, be completely covered by printing 100 copies instead of only the
70 subscribed for, so that after supplying the copies required by law, there will be
about 20 for residents in distant countries who have not had time to apply for them,
and for general sale.

To deal with a MS. more than five hundred years old is scarcely the domain of
a meteorologist, and I thankfully acknowledge the help of the authorities of the
Bodleian Library, of the University Press, and of Mr. and Miss Parker, the Rev.
R. E. Cole, Mr. Bayard, and others in reproducing the MS., and in trying to ascertain
who Merle was, and where his record was kept.