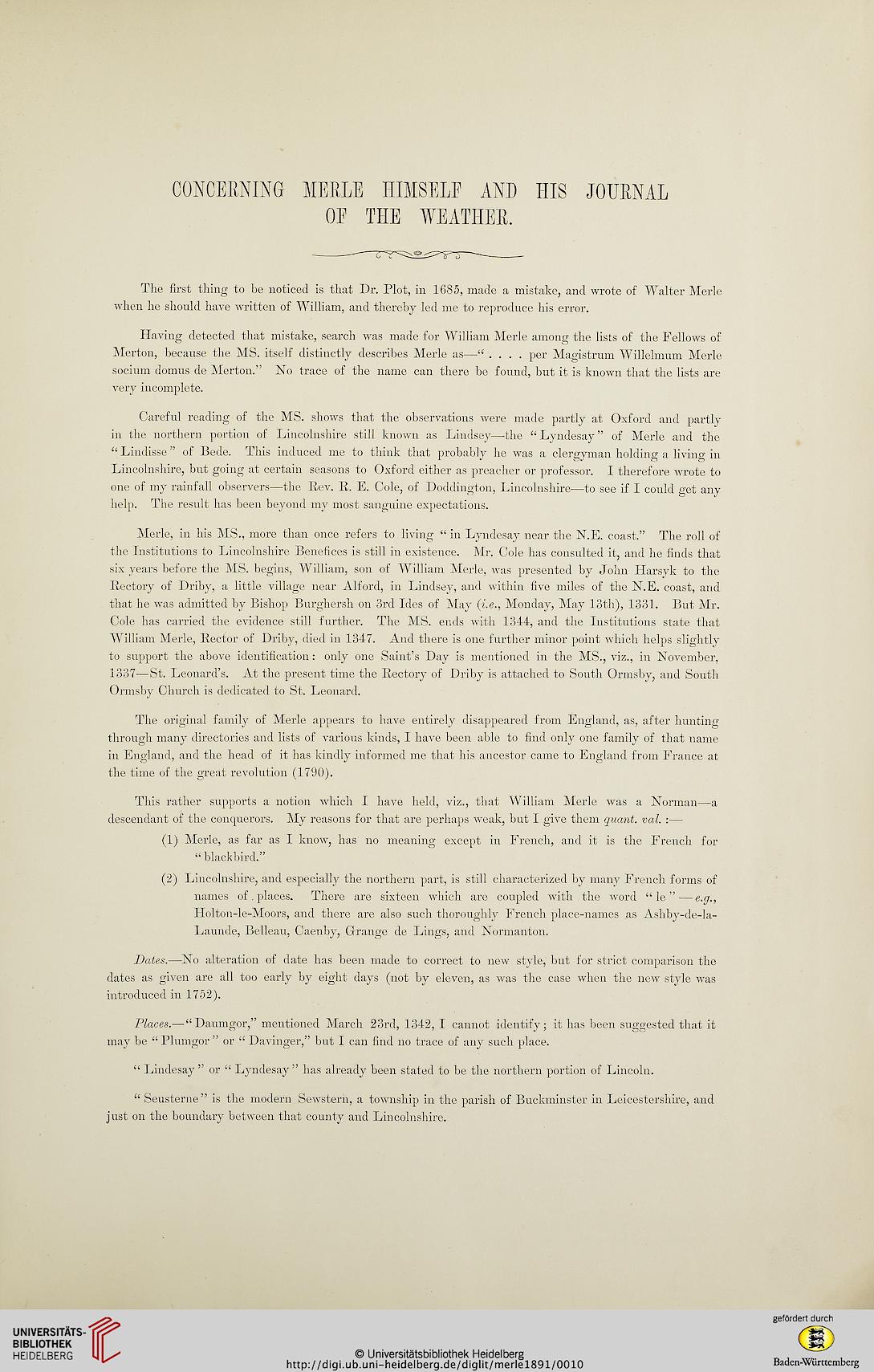 The first thing to be noticed is that Dr. Plot, in 1685, made a mistake, and wrote of Walter Merle
when he should have written of William, and thereby led me to reproduce his error.

Having detected that mistake, search was made for William Merle among the lists of the Fellows of
Merton, because the MS. itself distinctly describes Merle as—" .... per Magistrum Willelmum Merle
socium domus de Merton." No trace of the name can there be found, but it is known that the lists are
very incomplete.

Careful reading of the MS. shows that the observations were made partly at Oxford and partly
in the northern portion of Lincolnshire still known as Lindsey—the " Lyndesay" of Merle and the
(i Lindisse" of Bede. This induced me to think that probably he was a clergyman holding a living in
Lincolnshire, but going at certain seasons to Oxford either as preacher or professor. I therefore wrote to
one of my rainfall observers—the Rev. R. E. Cole, of Doddington, Lincolnshire—to see if I could get any
help. The result has been beyond my most sanguine expectations.

Merle, in his MS., more than once refers to living " in Lyndesay near the N.E. coast." The roll of
the Institutions to Lincolnshire Benefices is still in existence. Mr. Cole has consulted it, and he finds that
six years before the MS. begins, William, son of William Merle, was presented by John Harsyk to the
Rectory of Driby, a little village near Alford, in Lindsey, and within five miles of the N.E. coast, and
that he was admitted by Bishop Burghersh on 3rd Ides of May (i.e., Monday, May 13th), 1331. But Mr.
Cole has carried the evidence still further. The MS. ends with 1344, and the Institutions state that
William Merle, Rector of Driby, died in 1347. And there is one further minor point which helps slightly
to support the above identification: only one Saint's Day is mentioned in the MS., viz., in November,
1337—St. Leonard's. At the present time the Rectory of Driby is attached to South Ormsby, and South
Ormsby Church is dedicated to St. Leonard.

The original family of Merle appears to have entirely disappeared from England, as, after hunting
through many directories and lists of various kinds, I have been able to find only one family of that name
in England, and the head of it has kindly informed me that his ancestor came to England from France at
the time of the great revolution (1790).

This rather supports a notion which I have held, viz., that William Merle was a Norman—a
descendant of the conquerors. My reasons for that are perhaps weak, but I give them quant, val. :—

(1) Merle, as far as I know, has no meaning except in French, and it is the French for

(2) Lincolnshire, and especially the northern part, is still characterized by many French forms of

names of. places. There are sixteen which are coupled with the word " le " — e.g.,
Holton-le-Moors, and there are also such thoroughly French place-names as Ashby-de-la-
Launde, Belleau, Caenby, Grange de Lings, and Normanton.

Dates.—No alteration of date has been made to correct to new style, but for strict comparison the
dates as given are all too early by eight days (not by eleven, as was the case when the new style was
introduced in 1752).

Places.—"Daumgor," mentioned March 23rd, 1342, I cannot identify; it has been suggested that it
may be " Plumgor " or " Davinger," but I can find no trace of any such place.

" Lindesay " or " Lyndesay" has already been stated to be the northern portion of Lincoln.

" Seusterne" is the modern Sewstern, a township in the parish of Buckminster in Leicestershire, and
just on the boundary between that county and Lincolnshire.