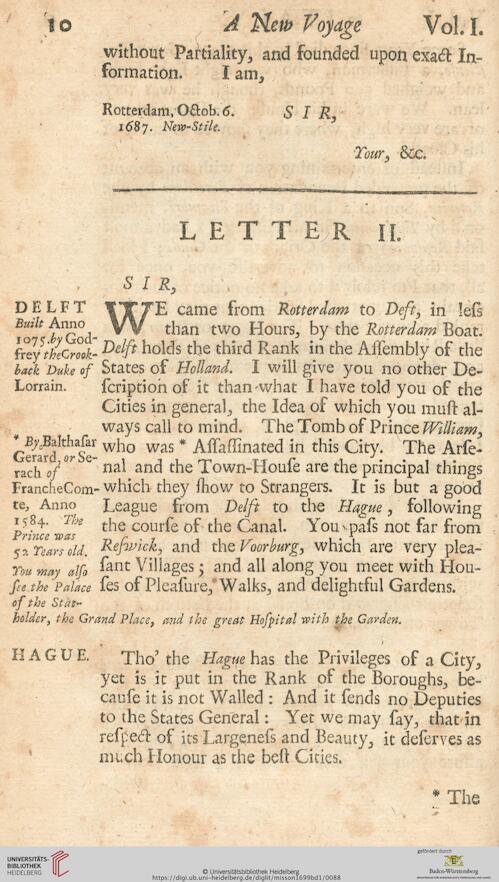 Information about OCR text
io A New Voyage Vol.I.
without Partiality, and founded upon exaft In-
formation. I am,
Rotterdam, O&ob. 6. SIR,
1687. New-Stile.
Your, &c.

LETTER II.
SIR,
DELFT <TTTE came from Rotterdam to Dest, in less
Built Anno \f\/ t}un two Hours, by the Rotterdam Boat.
freytheCr°ook- holds the third Rank in the Aisembly of the
hack Duke os States of Holland. I will give you no other De-
Lorrain. scriptioh of it than-what I have told you of the
Cities in general, the Idea of which you must al-
ways call to mind. The Tomb of Prince William,
* B^Balthasar wjlo was * Assassinated in this City. The Arse-
rachV’ C" na^ anc^ Town-House are the principal things
FrancheCom- which they (how to Strangers. It is but a good
re, Anno League from Delst to the Hague, following
Prf>^'e was ^ie cour^e Canal. Yoii'pass not far from
Rtfmck, and the Voorburg, which are very plea-
Tou way alsi ^ant Villages; and all along you meet with Hou-
see the ’Palace ses of Pleasure, Walks, and delightful Gardens.
os the Stat-
holder, the Grand Place, and the great Hofyital with the Garden.
II AGUE. Tho’ the Hague has the Privileges of a City,
yet is it put in the Rank of the Boroughs, be-
cause it is not Walled : And it sends no Deputies
to the States General: Yet we may say, that in
respest of its Largeness and Beauty, it deserves as
much Honour as the best Cities.