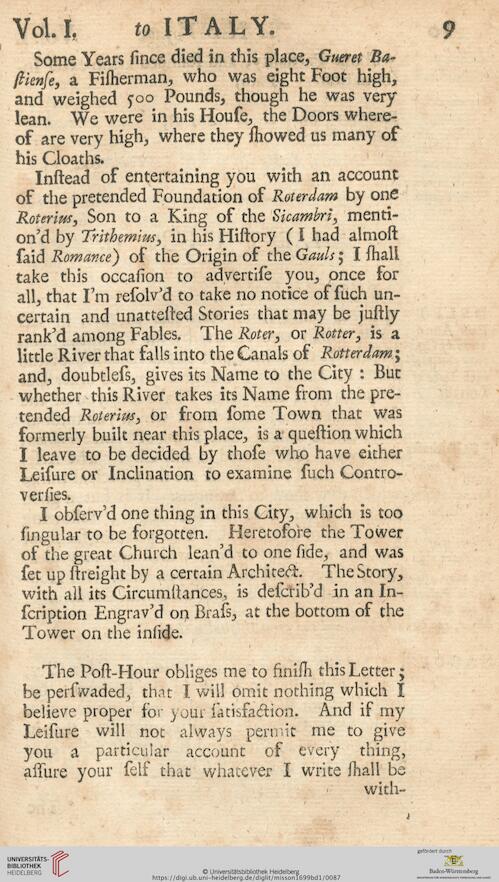 Information about OCR text
Vol. I, to ITALY.
Some Years since died in this place, Gueret Ba-
(liense, a Filherman, who was eight Foot high,
and weighed yoo Pounds, though he was very
lean. We were in his House, the Doors where-
of are very high, where they Ihowed us many of
his Cloaths.
Instead of entertaining you with an account
of the pretended Foundation of Roterdam by one
Roterias, Son to a King of the Sicambri, menti-
on’d by Trithemius, in his History ( I had almost
said Romance} of the Origin of the Gauls; I /hall
take this occasion to advertise you, once for
all, that I’m resolv’d to take no notice of such un-
certain and unattested Stories that may be justly
rank’d among Fables. The Rot er, or Rotter, is a
little River that falls into the Canals of Rotterdam $
and, doubtless, gives its Name to the City : But
whether this River takes its Name from the pre-
tended Roterias, or from some Town that was
formerly built near this place, is a question which
I leave to be decided by those who have either
Leisure or Inclination to examine such Contro-
v er lies.
I observ’d one thing in this City, which is too
singular to be forgotten. Heretofore the Tower
of the great Church lean’d to one side, and was
set up sireight by a certain Architect. The Story,
with ail its Circumltances, is describ’d in an In-
scription Engrav’d on Brass, at the bottom of the
Tower on the inlide.
The Post-Hour obliges me to fini/h this Letter;
be perswaded, that I will omit nothing which I
believe proper for your satisfaftion. And if my
Leisure will not always permit me to give
you a particular account of every thing,
allure your self that whatever I write /hall be
with-