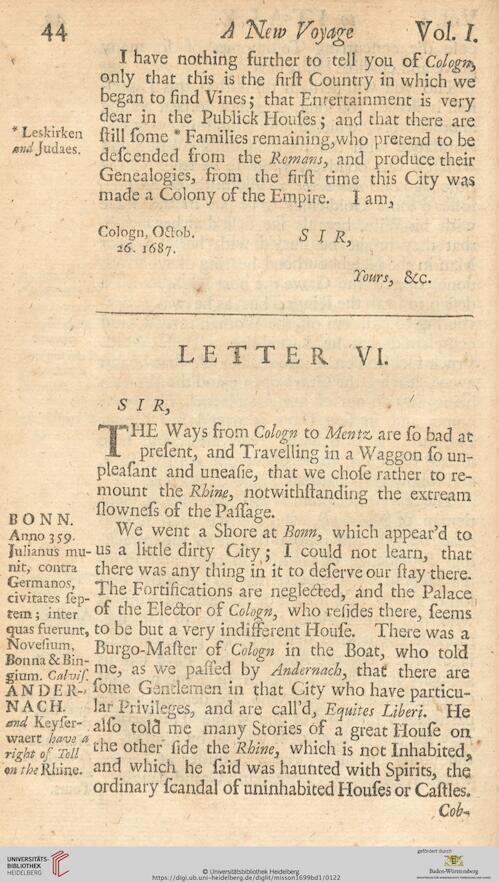 Information about OCR text
44 d New Voyage Vol. I.
, I have nothing further to tell you of Cologne
only that this is the first Country in which we
began to find Vines; that Entertainment is very
dear in the Publick Houses; and that there are
* Leskirken stist some * Families remaining,who pretend to be
judaes. Jese ended from the Romans, and produce their
Genealogies, from the first time this City was
made a Colony of the Empire. I am,
CoJogn, Ostob. SIR
26. 1687. ’ 1
Yours, &C.

BONN.
Anno 3 $9.
Julianus mu- ,
nit, contra there was any thing in it to deserveour stay there.
Germanos, y[ie Fortifications are negleded, and the Palace
fem^inter11 the Elector of Cologn, who resides there, seems
(.VlJLJL y -UlLCl J J
quasfuerunt, to be but a very indifferent Houle. There was a
Novesium, Burgo-Master of Cologn in the Boat, who told
gium^c^// me’ as we Pa^e^ by Andernach, that there are
ANDER-Tome Gentlemen in that City who have particu-
NACH. 1 ar Privileges, and are call’d, Elites Liberi. He
cmi Keyser- a]so told me many Stories of a great House on
£be other’ side the Rhine, which is not Inhabited,
on the Rhine. and which he laid was haunted with Spirits, the
ordinary scandal of uninhabited Houses or Castles.
Cob-

SIR,
'"A "TIE Ways from Cologn to Mentz, are so bad at
A present, and Travelling in a Waggon so un-
pleasant and uneasie, that we chose rather to re-
mount the Rhine, notwithstanding the extream
slowness of the Pastage.
We went a Shore at Bonn, which appear’d to
1-us a little dirty City ; I could not learn, that