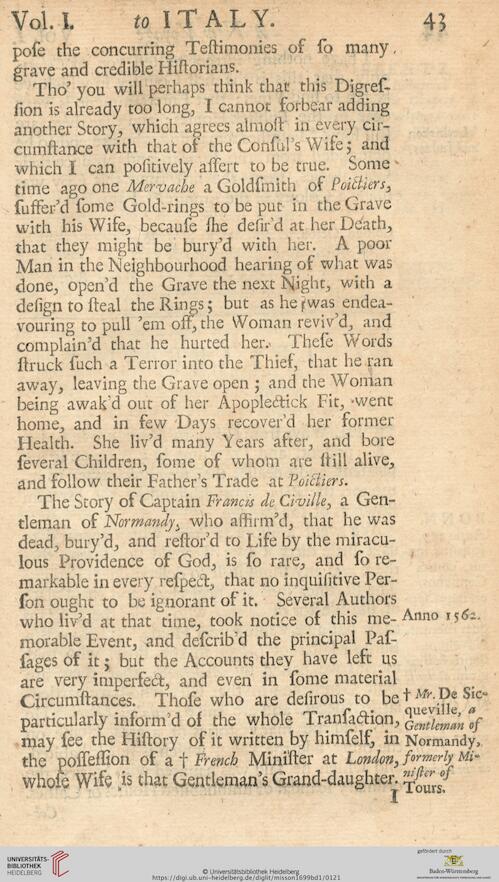 pose the concurring Testi monies of so many
grave and credible Historians.
Tho’ you will perhaps think that this Digres-
sion is already too long, I cannot forbear adding
another Story, which agrees almost in every cir-
cumstance with that of the Consul’s Wife; and
which I can positively assert to be true. Some
time ago one Mervache a Goldsmith of Poittiers,
suffer’d some Gold-rings to be put in the Grave
with his Wife, because she desir'd at her Death,
that they might be bury’d with her. A poor
Man in the Neighbourhood hearing of what was
done, open’d the Grave the next Night, with a
design to steal the Rings; but as he jwas endea-
vouring to pull ’em off, the Woman reviv’d, and
complain’d that he hurted her.' These Words
struck such a Terror into the Thief, that he ran
away, leaving the Grave open ; and the Woman
being awak’d out of her Apopledtick Fit, -went
home, and in few Days recover’d her former
Health. She liv’d many Years after, and bore
several Children, some of whom are hill alive,
and follow their Father’s Trade at Poiciiers.

The Story of Captain Francis de CPuille, a Gen-
tleman of Normandy, who affirm’d, that he was

dead, bury’d, and restor’d to Life by the miracu-
lous Providence of God, is so rare, and so re-
markable in every respest, that no inquisitive Per-
son ought to be ignorant of it. Several Authors
who liv’d at that time, took notice of this me- Anno 1561.
morable Event, and describ'd the principal Pas-
sages of it; but the Accounts they have left us
are very imperfect, and even in some material
Circumstances. Those who are desirous to be + Mr Pe Sic-
particularly inform’d of the whole Transastion, J-
may lee the Hiltory of it written by himlelf, in Normandy,
the possession of a f French Minister at London, formerly Mi-
whose Wife .is that Gentleman’s Grand-daughter. ™stcr °s
0 j 1 ours.