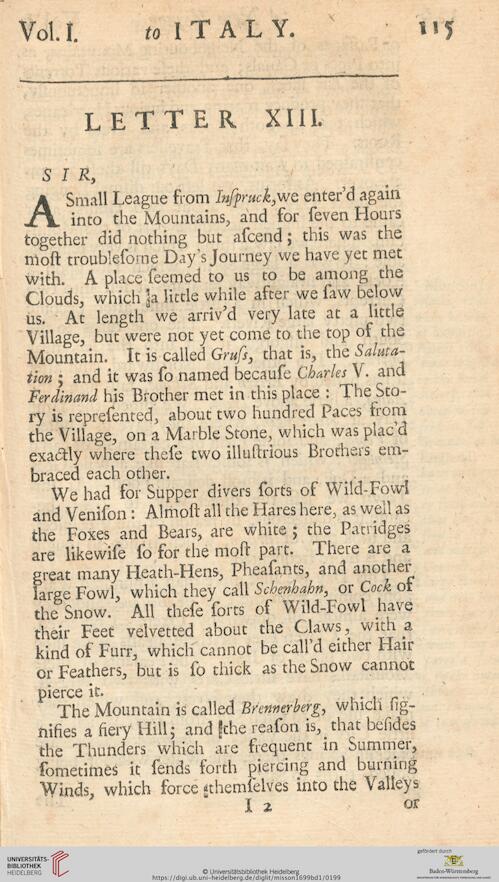 SIR,
A Small League from In/pruck^Q enter’d again
into the Mountains, and for seven Hours
together did nothing but ascend; this was the
rnost troublesorne Day’s Journey we have yet met
with. A place seemed to us to be among the
Clouds, which ]a little while after we saw below
us. At length we arriv’d very late at a little
Village, but were not yet come to the top of the
Mountain. It is called Gruss, that is, the Saluta-
tion ; and it was so named because Charles V. and
Ferdinand his Brother met in this place : The Sto-
ry is represented, about two hundred Paces from
the Village, on a Marble Stone, which was plac’d
exactly where these two illustrious Brothers em-
braced each other.
We had for Supper divers sorts of Wild-Fowl
and Venison: Almost all the Hares here, as well as
the Foxes and Bears, are white ; the Patridges
are likewise so for the most part. There are a
great many Heath-Hens, Pheasants, and another
large Fowl, which they call Schenhahn, or Cock of
the Snow. All these sorts of Wild-Fowl have
their Feet velvetted about the Claws, with a
kind of Furr, which cannot be call’d either Hair
or Feathers, but is so thick as the Snow cannot
pierce it.
The Mountain is called Brennerberg, which lig-
nifies a fiery Hill; and sche reason is, that besides
the Thunders which are frequent in Summer,
sometimes it sends forth piercing and burning
Winds, which force jthemselves into the Valleys
I 2 or