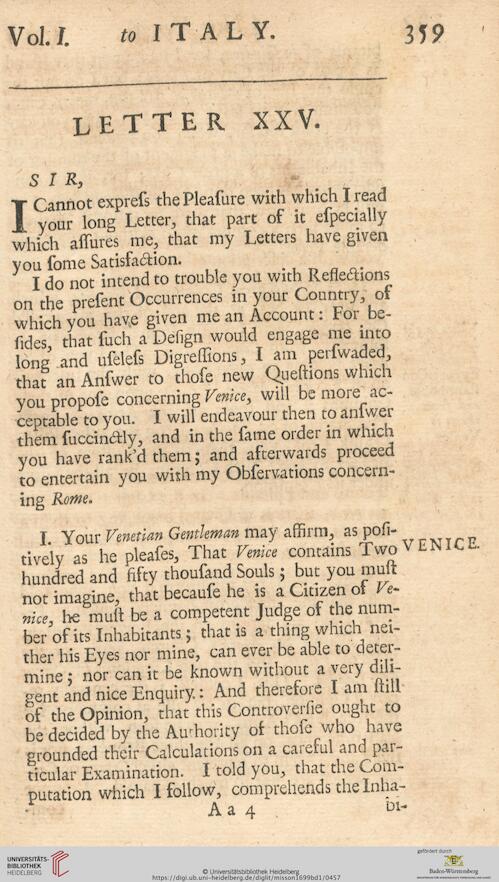 Information about OCR text
Vol. I. to I T A L Y.

SIR,
I Cannot express thePleasure with which I read
your long Letter, that part of it especially
which allures me, that my Letters have given
you some Satisfaction.
I do not intend to trouble you with Ressections
on the present Occurrences in your Country, os
which you have given me an Account: For be-
sides, that such a Design would engage me into
long and useless Digressions, I am perswaded,
that an Answer to those new Questions which
you propose concerning Venice, will be more ac-
ceptable to you. I will endeavour then to answer
them succinCtly, and in the same order in which
you have rank’d them; and afterwards proceed
to entertain you wish my Observations concern-
ing Rome.
I. Your Venetian Gentleman may affirm, as posi-
tively as he pleases, That Venice contains Two VENICE,
hundred and fifty thousand Souls; but you musf
not imagine, that because he is a Citizen of Ve-
nice, he mult be a competent Judge of the num-
ber of its Inhabitants; that is a thing which nei-
ther his Eyes nor mine, can ever be able to deter-
mine ; nor can it be known without a very dili-
gent and nice Enquiry.: And therefore I am still
of the Opinion, that this Controversie ought to
be decided by the Authority of those who have
grounded their Calculations on a careful and par-
ticular Examination. I told you, that the Com-
putation which I follow, comprehends the Inha-
A a 4 bi-