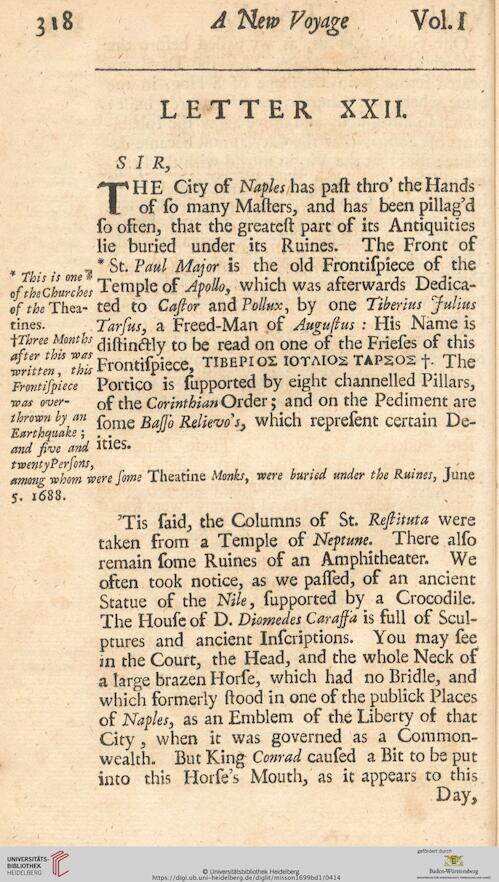 LETTER XXII.
SIR,
THE City of Naples has past thro’ the Hands
of so many Matters, and has been pillag’d
so often, that the greatest part of its Antiquities
lie buried under its Ruines. The Front of
* This is one? * Major is the old Frontispiece of the
ostheChurches Temple of Apollo, which was afterwards Dedica-
os the Thea- ted to Cafior and Pollux, by one Tiberius Julius
tines. Tarsus, a Freed-Man of Auguftus : His Name is
distindHy to be read on one of the Frieses of this
X^X^Frontispiece, tibepios iotaios tapsos f. The
Frontispiece Portico is supported by eight channelled Pillars,
was over- of the Corinthian Order; and on the Pediment are
s°me R-elievo s, which represent certain De-
and sive and ItlCS.
twentjiPersints,
among whom were seme Theatine Monh, were buried under the Ruines, June
5. x688.
’Tis said, the Columns of St. Resiituta were
taken from a Temple of Neptune. There also
remain some Ruines of an Amphitheater. We
often took notice, as we patted, of an ancient
Statue of the Nile, supported by a Crocodile.
The Housc of D. Diomedes Carass'a is full of Scul-
ptures and ancient Inscriptions. You may see
in the Court, the Head, and the whole Neck of
a large brazen Horse, which had no Bridle, and
which formerly slood in one of the publick Places
of Naples, as an Emblem of the Liberty of that
City, when it was governed as a Common-
wealth. But King Conrad caused a Bit to be put
into this Horse’s Mouth, as it appears to this
Day,